I met the Salty Boiz during one of those “transitionary” times in my life. This loosely-knit skateboard brotherhood was composed of Sam Cadillac—a tattooed, Tongan 30-something with a honey voice, a slick pompadour and a missing front tooth—and Jeff Juice, a pie-eyed lurp with as much affection for Herb Alpert and Neil Diamond as Spazz and Scholastic Deth. I felt an immediate kinship with them and their bawdy brand of urban skating.

The Salty Boiz: How I Learned to Love Skateboarding in Salt Lake City 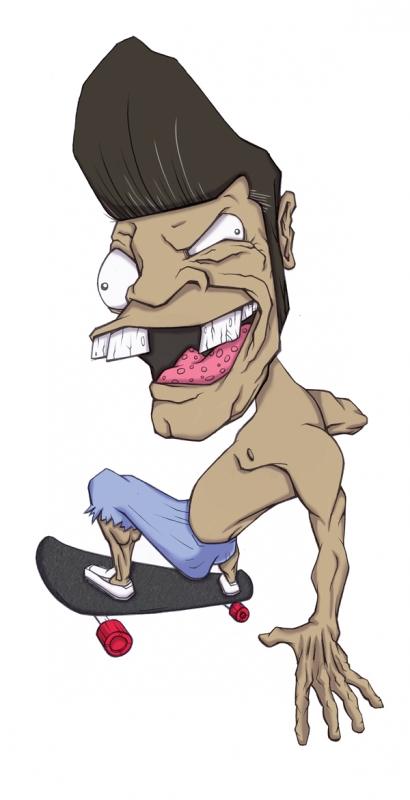 I met the Salty Boiz during one of those “transitionary” times in my life. This loosely-knit skateboard brotherhood was composed of Sam Cadillac—a tattooed, Tongan 30-something with a honey voice, a slick pompadour and a missing front tooth—and Jeff Juice, a pie-eyed lurp with as much affection for Herb Alpert and Neil Diamond as Spazz and Scholastic Deth. The duo had been raging under their “Salty” moniker for years, a banner of their Beehive State pride. When I made my appearance, I felt an immediate kinship with them and their bawdy brand of urban skating.

I’d just moved to Utah, and it’d been a reluctant change. The state’s religious zeal and cold winters had me a little spooked, but what really freaked me out was the simple fact that Utah was, in my mind, “West Coast,” and on the West Coast, kids were good at skateboarding.

I understand that the only thing “coastal” about the state is the salty brines of the “Great” Salt Lake, but in my feeble, corn-fed psyche, anything left of Iowa was lined with palm trees and featured in a Dr. Dre video. I’m from suburban Louisville, Ky., which ain’t a skateboard mecca, but a confluence of Midwestern and Southern cultures most famous for horses, tobacco harvests and incestuous, blue-skinned Appalachians. My skateboard genesis reflected such hayseed neurosis and consisted of chudded concrete and red curbs, redneck cops, kickflip practice ‘neath my basketball hoop and six-to-eight week waits on mail-order product.

I cultivated a neanderthal approach to nearly everything. Unmolded by trends, culture and sneering elder statesmen to tell me I wasn’t “cool,” my skating was ugly, retarded and burly … prime for Appalachian sprawl, but unfit for flashy, West Coast smooth. To me and my slack-jawed yokel skate rats, West Coasters hit stair gaps, wore diamond earrings and put out video-parts before they hit puberty. They occupied the uppermost echelon of skateboarding and I’d never catch up.

SLC had a rep for talent and skateboard development (and was the best stop on Thrasher’s “King of the Road” tour), and moving closer to the Pacific nexus of wood-pushin’ had me wary of losing my edge, my ragged credibility and my Dixie uncouth.

Elitist? Absolutely, but for all the sleep lost over it, the Salty Boiz restored my faith in skateboard goofballery the world over. They were skate mutants like me, wholly un-destined for photo coverage or contest rankings, but possessors of a slobbering lust for skateboarding to its logical capacity. No mega ramps or hype spots—I met them together, just cruising Main Street, and instantly wanted in. “The stink bank,” a gnarled ditch behind a credit union (so named for its proximity to an old dumpster that reeked out like a dead dog’s taint on hot days) became our meet-up. Scruffy and laden with loose gravel, we’d literally broom the site each visit just to render it skateable before turning it into our stony canvas for 180s, laybacks and any conceivable variation of the shuv-it we could muster. Full-on skate jousts with flourescent light tubes and discarded beer bottles became de rigueur, and we scattered the landscape with shards of glass, carbon fibers and our own palm skin.

Sometimes, Salty Boiz meetings convened under a freeway overpass, home to sketchy bums and stray hypodermic needles. Speckled in bird dung and oil spots, we fashioned a wallride track against one retaining wall and a small slider curb on the other. Most of the indigenous rail and factory workers let us skate in peace, a mutual communion of trash and sport, except once, when a disgruntled forklift driver chased us out with a hunk of a wooden planter swinging above his head.

What struck me most about the Salty Boiz was their rabid insistence that ugly human byproducts, bland and strictly functional, could always become skateable. One of these was “the dragon’s teeth,” a weird brick sculpture flanked by a sewer grate and a pointless statue. The dragon’s teeth were perfect for the 180 boneless, but condescending heckles from security guards and the intermittent spray of lawn sprinklers positioned right at the top came with the territory. Maneuvers on the dragon’s teeth were challenging, garish and unfashionable, but immediately satisfying.

The Salty Boiz had resilience and loose-lipped conviction to fun and fancy, to the unspoken idea that—in a subculture occasionally codified by sloganeering, energy drinks, flatbrims and douchebags—it was okay to kick against the pricks, to suck a little more marrow out of our ever-dying planet and to leave a print and make a spot. They know the skate canon always needs more entries, regardless of skill level and technicality, and they are re-writing the manual daily.

They aren’t the cool guys, and you’ve never seen ‘em at a contest or in a mag, but if you’ve seen a pair of hot-glued, googly eyes affixed to a public sculpture, the waxy luster of a freshly lubed curb or a chalk drawing of a dong, you’ve walked where they’ve walked. The Salty Boiz are skateboarding and they’re the reason I love skating in this city.