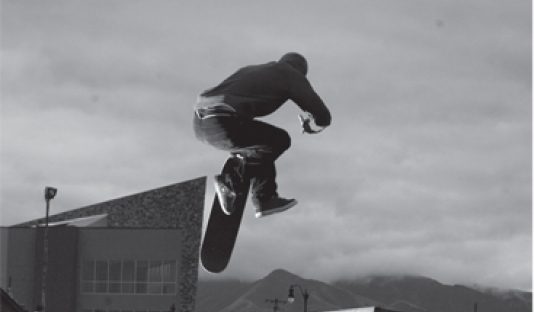 Summer arrived on June 21, and you all know what that means:  hot weather, BBQ’s, and SLUG’s Summer of Death contest series. Unfortunately, Mother Nature has been screwing with Utah for the past few weeks so why would Saturday be any different? After patiently waiting for the clouds to part, the remaining puddles were swept aside and the pavement started to dry. Practice began and the contest was a go.  Sure enough, within ten minutes Nature delivered a swift kick to our collective groins and unleashed a torrential downpour. However, this didn’t seem to bother a few skaters. Soon more and more competitors ventured out into the rain. So in true SLUG fashion, the contest was on.

The young bucks took to the course first. The rain made for some super sketchy conditions but that didn’t deter Powerbank and Chandler from hitting the Subaru roof box with back to back 5-0’s. This seemed to incite an onslaught by the rest of the competitive field.  In the end, it was Tyson walking away with a hundred bucks, silk screening kit, and tons of other cool shit. “Little Big Man” Daniel Roman took second despite being told repeatedly to stop poaching the kids division (turns out he was indeed in the right division, you’ll appreciate that when you’re older). Last but not least, walking away with the coveted loser of the winner’s spot was Patrick Brewer (since I don’t have a clever pun of your name I had to poke fun at the third place spot).

The rain started up heavy again as the old guys took the stage. It was pretty crazy how the wet conditions didn’t seem to stop the skaters from opening up their bags of tricks. Despite a wet launch, Hobush popped up to the hood for a frontside nosegrind. Chase, better known as Bloodface to the judges, caught one to the eyebrow launching the car to flat. On the other side of the course, Kevin, B-Rod, and Andy“The Dagger” Leyba destroyed the three step quarterpipe feature. After K-fed (third)  landed some sort of back 50-50 body variable nose slide shuv-it, B-Rod threw down not only a smith grind kickflip, but also a smith front big spin out (for which he was awarded best trick). Not to be outdone, The Dagger (second), a crowd favorite, out of nowhere stomps a back 50-50 fingerflip out (see those gloves did play a vital role after all). However, it was Matty Mo (first) who  stole the show as he straight up killed everything in sight and walked away with the title.

Thanks to all the sponsors for making it happen: Natty Light for giving us that extra boost, Este for warming our bellies, Circa for bringing two tents to keep us dry, FuelTV, Xmission, Blindside, Krew,Board Bunnies for letting us use their trailer, Lenitech, MiloSport, DankSquad, Burt’s Tiki Lounge (thanks for the drinks Shannon, and despite your complaints I tipped you all day),  Yudu, Rockwell, SaltyPeaks, Odeus, Board of Provo, Autumn Garage, Fourth Street Music, Sponsor Me, Sevenfold, Boro Syndicate, Fresh, Typical Culture, Fiber Skateboards and Mother Nature for providing unusual conditions, and all the skaters who risked life, limb and boards to provide us with one of the most entertaining contests I’ve witnessed in a long time.

Give credit where credit is due. Andy Leyba rode the bus to the comp, landed some gnarly tricks including a 50-50 lipslide across the rainbow rail, clenched second place winning a suitcase full of goodies and left with a massive smile on his face. Somehow  after all his shredding, this art-fag photo to the left was the only one that got turned in. All I have to say is Andy fucking shreds and I hope to see him and those funky hammer pants killing it in our next comp. This kid is an original ripper.