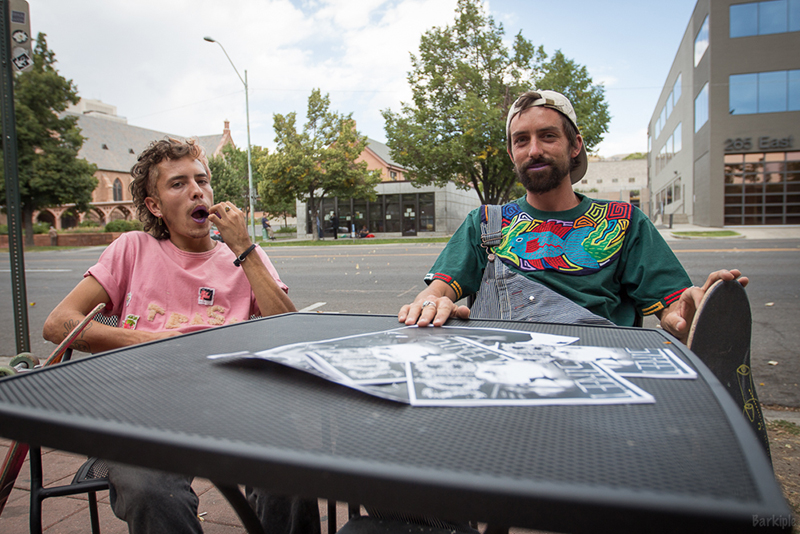 Willy Nevins: Behind the Buds

Willy Nevins has quite the creative mind. From the photos he takes to the zines he makes, he does it all with an artistic approach and a unique touch. Having long moved on from his past hit, Sofa King, Nevins released the first issue of his newest venture, Street Buds, on July 1. Created with the helping hand of dear friend Joey Sandoval, Street Buds is one of Salt Lake’s latest and greatest skateboarding zines—with a sprinkle of this and that from the mind of Nevins and some familiar contributors. In short, the entire zine is both entertaining and visually pleasing, and displays the great skate talents of Salt Lake City.

SLUG: So you used to do Sofa King. What happened with that?
Nevins: Sofa King was a zine that ran about five issues, and it just sort of started with a core intention that just took off in its own way and, by the end, had a lot of contributors and people that wanted to take part in it, which was awesome, but it kind of just made it dissipate in a way. It had a good run, and I felt like I said what I needed to say with it and let it end on a good note. Plenty of people were involved and interested in it by the end, and it just felt like it had its run and it kinda lost its … yeah. I’ll just say that.

SLUG: Did you move onto anything from there before Street Buds?
Nevins: In a zine format, not really. I did an illustrated story with Tully Flynn and that was called Crow Race. It was like a zine-style publication, but it was more focused around the writing and the art, and it was a little more refined. We have friends, Nate Silverstein and Andrea Paustenbaugh who run Book Book Press, and we printed it on an offset printer—at least part of it—so it had a little more quality than just a xerox zine, but it was still in the same spirit as self-assembly and formatted by using scissors, paint and glue. It just came out a little more polished and had a little more … you know … The printer gave it a little more of a crisp feel.

SLUG: Your new zine, Street Buds, what’s it all about—who can submit and what kind of stuff does it feature?
Nevins: I guess the whole reason why it started was I got a camera way back with the intention of filming skateboarding, and then I just felt like there was already a lot of awesome people filming skateboarding. Joey’s sitting here [motions], who films, and Butters and people like that. Going out on sessions with a bunch of homies, it didn’t make sense to try to film with an HD camera when people just want to film with the VX. And everyone was already working on a full-length project, whether it was with Joey or Butters or whoever. So I just started shooting photos for the hell of it and going out more and more with Joey and the whole Call It Venting crew. I had a huge stockpile of photos, and I had always made zines in the past and it was like, “It’ll be easy to put together, and I don’t want to see these photos just disappear on the Internet.” I wanted to put them together in some sort of presentable way and have my own touch on it—my own artistic presentation of it. So we just started talking about the idea of it and came up with the name and came up with silly roles before any of it was real. It’s kind of like a fantasy for the summer. Anytime we would go out, I was taking photos and telling people about it. Finally, we just took the photos we had, and I had time to sit in my studio and put it all together. Joey helped me print it and assemble it, and we got it out.

SLUG: So how did everybody else’s work come into it?
Nevins: We basically asked around to a few friends who shoot skate photos, and there were some submissions that people gave us. I was stoked to get submissions, but then when it came down to making it, it just felt right to use the photos that I had because they had a common thread through them. They weren’t just photos from random people or sessions I wasn’t a part of or skaters I didn’t know. Not that that’s a bad thing, but they kind of partnered well. A lot of the photos in here are from filming sessions with Joey so you can actually see the clips in Joey’s video. It just made sense to keep it a little more within the closer circle of friends. Sam [Milianta] had photos of friends that we used, and Joey and Butters both had photos. I wasn’t the sole photographer, but I wanted to keep the body of photos more or less related.

SLUG: It’s pretty skate-focused. Was that a conscious effort?
Nevins: Yeah, I just wanted to make a 100-percent–Salt Lake City skateboard zine. Sofa King always had skateboarding elements to it, but it was art and music and environmentalist stuff. With this, I just wanted a skateboard magazine for Salt Lake, because that doesn’t exist here.

SLUG: So with zine making and skateboarding, does one fuel the other, or you just kind of do both and decided to put them together?
Nevins: I just think that goes to the roots of the skateboarding aesthetic. It’s always been a DIY thing and in its prime, before everything got flashy and mainstream and put on the Internet, the best shit every one looks back on and likes is stuff that was done by creative individuals back in the day. I think the stuff that’s coming out right now that’s good has some sort of element of that DIY, gritty feel. There’s nothing fancy about [Street Buds]. You can see the masking tape and the xeroxes and the photos get a little muddled, but it’s a zine. It’s the punk rock side of skateboarding, and I’m just trying to keep that alive.