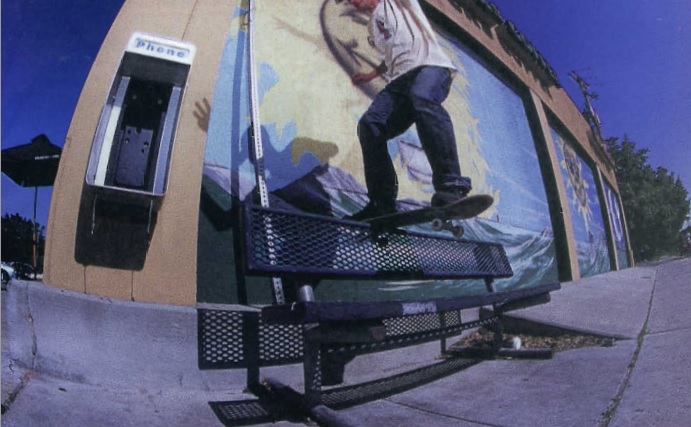 Zen & the Art of Skateboarding

“With a calm, silent, hidden smile not unlike a healthy child’s, the Buddha walked, wearing the cloak and setting his feet down like all his monks, according to a precise regulation.” – Hermann Hesse, Siddhartha.

In every community, every walk of life, every art form, there is a motivated soul, always one step ahead in action and thought. Some people follow and some people lead; Andy Pitts chooses to lead, inspire and never allow for stagnant, uncreative skateboarding. Some go as far as comparing him to the Buddha: skateboarding in the state of perfect enlightenment “according to precise regulation,” passing his knowledge and passion along to those that choose to surround him.Andy’s story begins in the rural outskirts of South Dakota, where he began teaching himself the ritual of skateboarding. If you watch him skate, you will realize that he taught himself well. He carries around a large bag of tricks which he can execute with technical precision in a calm and carefree manner. With his self-taught perfection of skateboarding under his sail, he captained his maiden ship to Salt Lake, where he has resided for many years and illuminated the minds of friends and fellow skaters alike. Upon moving to this land of raging hot summers, he, along with other ripping local skaters, co-founded the original Dirty Hessian Videos, which, over the past few years, has become the 48 Videos. These videos have become a staple of Salt Lake City skateboarding media that every kid in town can look forward to receiving in the fall.

Zen & the Art of Skateboarding, as well as anything in life, can become stagnant with old, over-skated spots and tricks. Captain Bondo, a nickname Andy took upon himself attributable to him fixing everything with Bondo, will always have something new and fresh in his entourage, whether it is a new spot in the most random address in the valley, making an unskateable spot skateable, or motivating his friends to build an entire indoor skate park for the cold winter months. Let’s not forget to mention that his humble ability on a skateboard will amaze anyone in his presence. Andy’s humility exceeded his talent a few years back when he turned down a professional spot on the 5boro team in order to let the younger Aaron Suski take the position. In takes quite a man to pass up such an opportunity, which many would sell their souls for.

Image, fame and money; the motivators for which skateboarding has become generally known, doesn’t affect Andy. He cares more about what tricks his friends are doing than what tricks are happening in skate media. He skates because he loves it, and will keep skating for that sole reason. As many people get older, they fade away from their childhood passions. But age, career or other social pressures will never keep Andy from his youthful adventures of skateboarding. Throughout the year, Andy motivates his friends to go on road trips purely to skateboard and film for the annual 48 Video. Every trip that I have gone on has been filmed with nothing but skating and good times. However, along with every great trip comes with occasional disappointments: nowhere to sleep, somewhere one would rather not sleep, car troubles, injuries and so on. Andy once slept in the rocket box atop the roof of his car in Seattle. At about six in the morning, he opened the box to a passing startled and extremely confused elderly man out for his morning walk.

Currently, Andy and Mike Hays are in New York City skateboarding and hanging out with the coveted 48 filmer Aaron Ohrt. Mike Hays, who called me from New York, seems to disagree with all the gibberish I have just spit your way, telling me, “even though he [Andy] doesn’t think it, he is as lost as all of us.” Believe who you will or find out for yourself about the Zen master of skateboarding, Andy Pitts.