00:00 / 20:24
Spotify Stitcher
RSS Feed
Share
Link
Embed
The ski and snowboard scene in Utah is vibrant—A diverse landscape provides the perfect backdrop for athletes to hone their skills. But it isn’t enough to just get out and do it day after day—your equipment needs to be able to keep up, too. A core shot here, a blown edge there, or a pesky hot spot on your ankle can ruin your afternoon. Twin Peaks Rentals and Repair and Inkline Foot Science, these shops have you covered from the ground up. Literally. 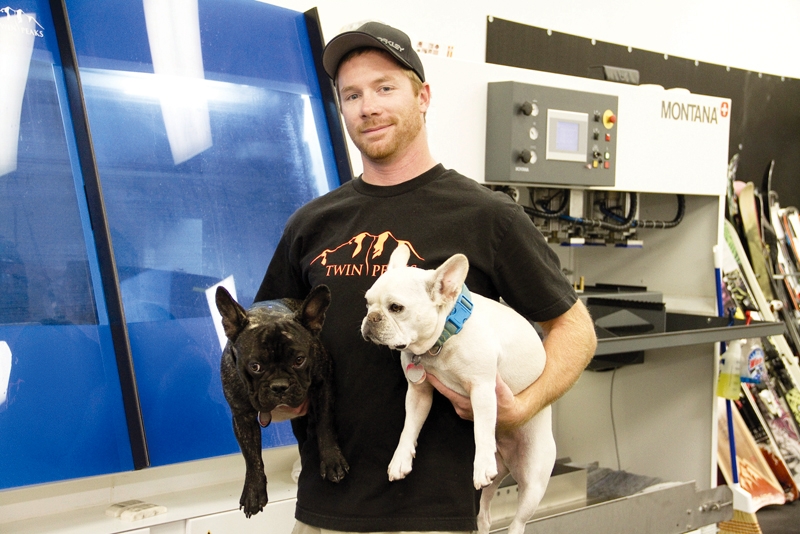 Tim Lewin, owner of Twin Peaks Rental and Repair, hanging out at the shop with his dogs, Clark and Nilla. Photo: Katie Panzer

Suffice it to say that the ski and snowboard scene in Utah is vibrant. Fourteen resorts throughout the state provide ample opportunities to shred, four of which are nestled right in the bosom of the central Wasatch. Riders from around the valley find their way into the mountains each season to discover pure bliss as they careen down slopes covered in white gold. A diverse landscape provides the perfect backdrop for athletes to hone their skills, and at the end of the day, they lie back and dream of doing it all over again tomorrow. But it isn’t enough to just get out and do it day after day—your equipment needs to be able to keep up, too. A core shot here, a blown edge there, or a pesky hot spot on your ankle as you make your way across the hill can ruin your afternoon. Between Twin Peaks Rentals and Repair and Inkline Foot Science, these shops have you covered from the ground up. Literally.

The smell of hot wax permeates the air walking through the door of Twin Peaks. A pair of well mannered dogs greet customers as they hear the grinder wailing away on some forlorn base in the back. “Welcome to Twin Peaks, have a seat on the couches and we will be right with you,” says owner Tim Lewin. It is immediately clear that this isn’t the typical repair shop. Beautiful, hand-painted mountain murals grace the walls and a clean-cut floor space houses everything from skis, boards and skins, to locally made poles and bindings. Comfortable seating and ski movies on the TV create a relaxed atmosphere that is a far cry from the cattle-yard-style shops at most ski areas. “We wanted to create a high-end tuning shop with more of a homey feel. That was really lacking here,” says Lewin. The ambiance of the shop certainly portrays the attitude of the owner. This laid back 31-year-old made his way from the towering peaks of Baltimore, Maryland to settle in the multifarious terrain of Utah. His previous life as a professional downhill mountain bike racer gave him an appreciation for soft landings, and he fit right into the lifestyle. During his first few seasons, he managed the Cliff Sports tune shop at Snowbird and spent his days lapping the Tram and his evenings slaving away in a closet surrounded by noisy and potentially dangerous machinery. He wanted something more.

Eventually, his prowess as a ski tech landed him a job with Montana. This top-of-the-line equipment manufacturer from Switzerland builds tuning machinery that is utilized by professional shops the world over. Lewin began his tenure with Montana as a traveling technician who kept the machines operating at peak performance. Before long, his reputation gave him enough clout to approach them with a new idea. Several years in the making, he had formulated a business plan to open his own store, complete with a Montana-furnished tune shop and a sales floor that catered to the core rider. They accepted the idea and let him run full speed ahead. The next year enabled him to set up the logistics and work out the minute details most people don’t think about. “The zoning in Cottonwood Heights was difficult to get around,” says Lewin. Through diligent efforts, and his friends ushering him along, he was able to settle the score and open up the shop in the latter half of 2011. “It has been a good feeling to serve the local community. I am a tuning geek, and it is nice to have a ski shop built around a tune shop,” says Lewin. In addition to state-of-the-art machinery capable of producing world championship-level tuning, there is also a full fleet of rental and demo skis and boards. His commitment to providing a unique experience for his clientele incorporates local companies like Panda Poles and Wubanger skis. Additionally, he sells gear from Amplid and Arva, smaller Euro companies that produce reliable products for snow riders. There is no end to the amount of fun and flexibility these guys can achieve with their space, and it is worth a visit just for the conversation. Twin Peaks is conveniently located between Big and Little Cottonwood Canyons at 3436 E. 7800 S., just off Bengal Boulevard near the Smith’s.

Properly tuned gear is wonderful. However, controlling those slippery wooden conveyances can be another story. Enter Chris O’Connor (O.C.), owner of Inkline Foot Science. Tucked into a tidy corner on 2929 E. 3300 S., this shop is simple and unassuming. On the walls hang autographed pictures of all the pros O’Connor has fit over the past three years. A ski flick plays on the monitor, and the maestro sits in his rolling chair crouched over a client’s feet. “By doing this, you are going to have more power and more confidence,” says O’Connor to the young ski instructor he’s fitting. His demeanor is chill and I can tell by his tone that he has done this for years. Slipping the boot off the client’s foot, he meanders to the workshop and begins to whittle away layers of plastic. The back area is filled with machinery resembling medieval torture devices, yet it is super clean and well kept. Helping someone find joy in putting on a boot is no easy proposition. Taking a rigid, plastic shell resembling a bear trap and contriving something close to comfortable can be time consuming and tedious. Molding a proper foot bed is also an integral step in the process of developing the interface between man and board. “This thing cost me $7,000, but I have never had one of these foot beds come back on me,” says O’Connor of his futuristic Conform’able machine. The device resembles two blue pillows filled with sand and is used to get an accurate footprint. From there, he can make small modifications in an un-weighted stance to provide the best support structure possible. “Any gravity-fed sport is going to need these. It keeps the foot the same throughout activity and prevents sprawl,” says O’Connor.

Growing up in Texas gave O’Connor little chance to ski, but he found a passion for biking. His involvement on the professional downhill mountain bike racing circuit led him to several victories and some not-so-pleasant crashes. He crossed paths with a young Tim Lewin and the two became close friends. “I was inspired by O.C.’s drive,” says Lewin.

O’Connor served a stint at Snowbird’s Christy Sports. He developed a keen sense for helping people find comfortable snow footwear and eventually developed a sizable client base. His regulars convinced him that he had the skills to open his own business and that they would support it. Moving down the canyon to the current location in 2010, Inkline Foot Science was born. “I opened up this shop with nothing but a bike toolbox full of supplies. Everything I have now is off of generated revenue,” says O’Connor.

Inkline now boasts custom equipment, a full line of performance boots, and Lib Tech and Hart skis. O’Connor can be found in the shop nearly seven days a week, and he has trained a staff of apprentices to aid him in fittings. Walk-ins are welcome, but an appointment is recommend if you want to sit down with the master. For 2012-2013, the two shops will continue to share their agreement of exchanging biz. O.C. sends his tunes to Lewin, and Lewin sends his fits to O.C. Teamwork truly makes the dream work, and it will be exciting to see what these guys come up with in the coming years. In the meantime, don’t forget to wave as they fly by you on the hill donning their handiwork.