00:00 / 13:13
Spotify Stitcher
RSS Feed
Share
Link
Embed
Only four spots are available from the Americas on the Freeride World Tour, and Salt Lake locals fill all of them. Shannan Yates, Laura Hadar, Laura Dewey and Kaitlin Elliott have secured their positions for this season and are amped on the opportunity to display their skills on a world stage.

Femme Fatales: The Snowboarding Ladies of the Freeride World Tour 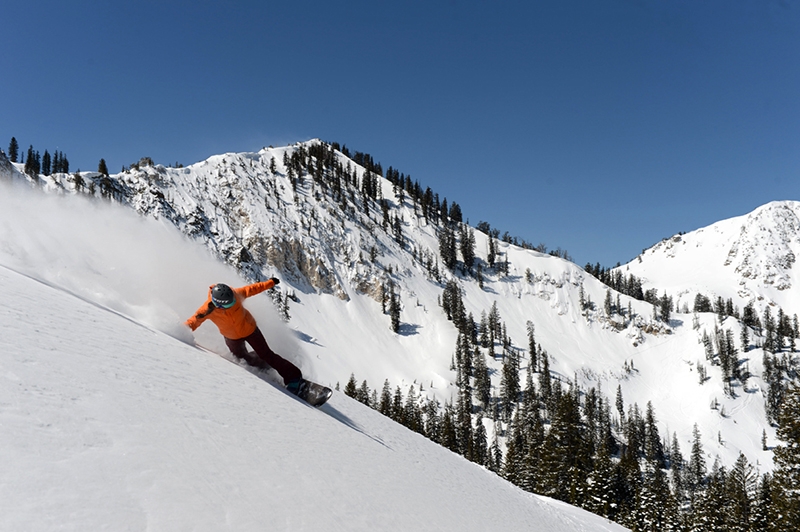 Freeride has emerged as a discipline of snowboarding and skiing where riders pit themselves against natural big-mountain terrain. For years, riders in this niche sport have attracted more attention from a global audience. European freeriders enjoy a near-celebrity status in their home nations, but athletes from North America are only now being given the fanfare they deserve. Last year marked the inaugural season of the Swatch Freeride World Tour by The North Face (FWT) and it proved to be the perfect setting for athletes to showcase their talents. A combination of the now defunct North American Freeskiing World Tour and the European World Tour, the FWT is composed of six stops across the northern hemisphere. The 2013-2014 season will encompass venues from Canada, Italy, France, Austria and the USA before the finals in Verbier, Switzerland. Riders will converge at each location and do battle against fellow competitors and the unforgiving environs. The events will be judged based on five categories: difficulty of line, control, fluidity, jumping and crashes.

Each athlete will be given an opportunity to visually inspect their line and then have one chance to ace their selection. This format ensures the riders have access to the best snow conditions, and it fosters a competitive environment unique to freeride. The top echelon riders of each discipline, men/women snowboard and ski, are invited to compete on the FWT each year based on their performance in qualifying events. Over a thousand riders from these qualifiers vie for a place in the Tour lineup and a shot at glory. The women’s snowboard category is by far the smallest segment of the FWT. Only four spots are available from the Americas, and Salt Lake locals fill all of them. Shannan Yates, Laura Hadar, Laura Dewey and Kaitlin Elliott have secured their positions for this season and are amped on the opportunity to display their skills on a world stage.

The Wasatch Mountains, and specifically Snowbird, have provided the perfect training ground for these ladies to perfect their craft. The blend of extreme terrain and ample snowfall is ideal for developing confidence and sound fundamentals. “I spent a lot of time riding in Vermont, but Snowbird taught me how to shred,” said Dewey.

These four have dedicated their lives to the mountains, and it is no small feat that they have been able to achieve success in both their personal and competitive endeavors. Each lady has a unique approach to competition and the way she prepares for an event. However, they all share a love of the sport and it is evident the camaraderie among them perpetuates greatness.

Shannan Yates is a calm and unassuming character. At 36 years old, Yates has been on the competitive circuit for a decade. Growing up in Utah and riding the big mountains from a very young age instilled in her an appreciation for the outdoors and a passion for snowboarding. On the urging of a friend to try her hand at competing, Yates entered an event in Crested Butte, Colorado in 2004. Placing well at the comp sealed the deal and she was hooked. Yates went on to continue dominating national events such as The North Face Masters of Snowboarding, and in 2010, she won the outright title. Her prowess in big mountain events gained her considerable notoriety and landed her a spot on the 2012 FWT She placed third overall that year and also placed first overall at The North Face Masters. Last season Yates laid down stellar performances at several of the FWT events and placed third in the overall tour yet again. Even more amazing than her on-course talents is her ability to juggle real life with her professional career. In addition to her full-time job at a veterinary hospital, Yates is currently pursing a nursing degree at the University of Utah and has to balance time at the hospital with time at the hill. Fortunately, she has a strong will and a supportive husband that encourages her in all her adventures. The 2013/2014 season marks Yates’ 26th year on a snowboard and she is aiming for total FWT supremacy. “I am excited for the level of competition on tour this year. Everyone will have to try that much harder,” said Yates.

Little Cottonwood Canyon renaissance woman, Laura Dewey, will be joining Yates and company on the FWT this season. “Dewey” as she is known in the canyon, has a long list of industry jobs and is currently working as a graveyard-shift snowmaker at Alta. It doesn’t bother her that they don’t allow snowboarding: she gets her turns in under the moonlight while the town is fast asleep. Dewey’s years of training at Snowbird landed her a position as a resort athlete and she couldn’t be more proud. She has come a long way from riding the hills of East Hampton, Connecticut as a kid. At age 31, Dewey is amped to be on tour again this year. She made her name known in big-mountain snowboarding by taking first overall at The North Face Masters in 2008. “Everyone has their good days and every day is different at the top of the starting gate,” said Dewey of her competitive experiences. Dewey had some great days in the starting gate and placed first at the Chamonix-Mt. Blanc tour stop last season. Her consistent performances at each venue awarded her fourth overall on the FWT in 2013. The upcoming season promises to challenge Dewey even more, and she seems up to the task. “Sometimes you just have to drop in and stop thinking,” said Dewey.

New to the FWT this season are Kaitlin Elliott and Laura Hadar. Elliott is no stranger to competition and she has big plans for her first year abroad. An aspiring massage therapist and overall friendly gal, Elliott grew up riding the Wasatch and knows what it takes to perform in the big mountains. Her wisdom precedes her 27 years and she is collected in her thoughts about this year’s tour. “It is a good way to live life. You channel your emotions, whether they be scared, excited, or confident,” said Elliott. Her experiences in a big mountain competitive environment began in 2008 with The North Face Masters. This has been a common thread among the group and they remark how great an opportunity it was for snowboarders to compete on such a high level in the United States. Elliott made her way onto the FWT this year by placing first at the Salomon Extreme Freeride Championships last February. “I went in with a clear mind and did well,” said Elliott.

Laura Hadar has been on the film scene since she was 21, but she is just now branching into competitive big-mountain riding. Her performances at rail jams and banked slalom events further add to her notoriety. Filming for the latest Nike snowboard movie, Never Not, kept Hadar out of competition last season, but she was able to secure a “wildcard” slot for this year’s FWT and is excited to try something new. “After seven years of filming video parts and doing a few slopestyle contests here and there, big mountain riding just seems like the next step,” said Hadar. Gearing up for the FWT takes a monumental effort and training is critical to performing well at the events. Hadar spends her time in the Wasatch working with other female competitors and honing her skills on the snow. All this has to be done while she manages her small business located in Downtown SLC. Hadar is the owner of FICE, a gallery and boutique that carries a variety of streetwear brands and has something for everyone.

The opening event for the 2013/2014 FWT will be held at Revelstoke’s Mac Daddy Face in Canada on December 18. Depending on weather, the event could take place on that day, or any of the subsequent days set aside for the competition. This scheduling makes it difficult to plan time off from work and school for the athletes, and it often means sitting around at a location for quite a while. Logistics and financing can be tough to organize and each competitor has to get creative with their paychecks. Prize money helps out, but Women’s Snowboarding on the FWT doesn’t fetch much of a purse. To assist with their planning this season, the Salt Lake contingent has put together the Freeride Funddrive on December 5 at The Canyon Inn. Located at the mouth of Big Cottonwood Canyon, the bar and grill provides a great venue for the ladies to host a fundraiser that will help them supplement their travels abroad this year. It is an excellent opportunity to come out and support the local riders and win some cool raffle prizes and bid on auction items from Salty Peaks, Milo Sport, Smith Optics and Snowbird Resort. The shindig starts at 9 p.m. and features melodic beats from DJ BJ, cheap drinks and tasty sides. It is also a way to interact with the women representing the USA at this year’s tour and get involved with the local female snowboarding community. “We are going to be a force to be reckoned with this season,” said Elliott.

Check out more of the FWT at freerideworldtour.com and tune in for all the action starting December 18.