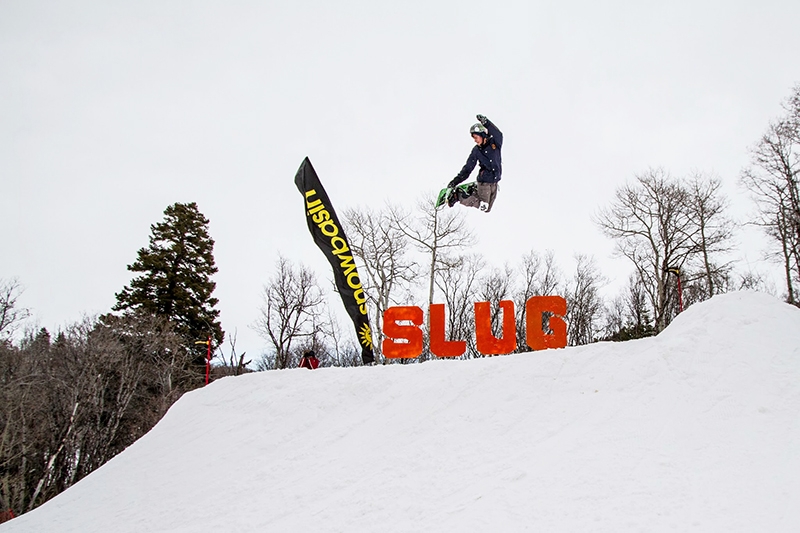 The battleground was set this past month when the SLUG Games Battle at Basin Presented by Scion hit Snowbasin Resort. The course was a warzone, to say the least. There were a couple of unique features, including the focal point, a “tank” butter box equipped with a heavy-caliber cannon pole jam, as well as two flat boxes on the side. A mega hip with a SLUG emblem on top was directly to the right of the tank along with a fatty flatty tube and a second, steeper pole jam below. The course was on-point as a result of the hardworking park crew up at Snowbasin Resort and the SLUG Games course designers. With 132 riders registered for the fight—SLUG Games’ biggest turnout yet—the contest was definitely going to be a battle to the end.
With the sun shining and the course set, there was nothing else to do but declare war and let the battle begin. We started the day off with the groms in the 17-and-Under Division. Big and small, full beards to peach fuzz, these kids threw it down on all levels. Two divisions were open to skiers and snowboarders, respectively, and creativity and originality in each discipline were key factors for the judges. These kids were getting upside down and sideways on pretty much every feature with guys like Jake Lewis throwing a huge back flip off the SLUG hip and Jackson Jenkins going over the top forward, throwing a big front flip off the butter box tank. For the snow surfers, Garrett Whitesides had some huge and stylish seatbelt grab back 180s off the cannon, while Trevor Otterson threw a Texas-sized backside rodeo off the hip. Frontside and backside 270s onto the flat tube were looking standard, while the pole jam parallel to it saw a tornado’s worth of spins off it. Spin it to win it was the motto of the day, and the competitors delivered.
The contest only became more intense when the Men’s and Women’s Open Ski Division stepped up to the front lines. This division was a straight shootout with every competitor ripping the course apart. The competition saw some firsts in this round, like a screamin’ semen from Dylan Manley off the cannon. For those of you who think I just made some weird, perverted reference, allow me to clarify: A “screamin’ semen” is a midair leg cross on skis with a grab included. These two-plankers definitely kept things interesting with Pit Viper’s own Chris Garcin getting radical with a double Daffy off the hip, straight down to slide the pole jam with a 270 spread eagle off the end. Did I mention Chris was wearing a red one-piece, skiing some ancient Elans and hooking up his line with some hypnotizing mogul turns? Needless to say, this was a crowd pleaser of a run that would become a highlight of the day.
The Men’s Open Snowboard Division went off with a bang as Brady Larson shot an absolutely huge nollie front flip off the cannon. The march continued behind with an onslaught of tricks going down on all of the features. With so many great riders, “steez” was a must. KC Russell, a Snowbasin fan favorite, lay down a stylish, on-snow boardslide on the butter box straight up and off the cannon, showing he’s not afraid to take a chance. Jesse Ramirez was charging all ways, spinning front, back, same way and reverse off both pole jams, making it look easy, while Christian Hobush threw a stylish under flip into the chopped-up landing of the hip. Holding it down for the ladies were riders like Maya Keefer, grabbing her tail off the cannon, and Sam Kolesky going big and spinning on and off the flat tubes. It was a hell of a heat, with entirely too many hammers to mention. With money on the line and snowmobile rides for the finals, everyone was throwing down and having a great time.
Six were chosen for the finals from each division, and they competed together as a mixed division. The SLUG team could see the energy translating between divisions, so the finals were a mixed batch with a high energy level. For the skiers, Milan Peyn and Alex Koford kept things fresh, running doubles runs with a train of back flips and some synchronized flat tube footwork. The dynamic duo would wow the judges enough to share a Third Place spot for the 17-and-Under Division. Jenkins would show his versatility and consistency in the finals, throwing both regular and switch 360s off the tank, landing him in Second. Lewis would throw a giant flat spin and consistently switched up backside and frontside spins on the tubes to win it all.