00:00 / 18:49
Spotify Stitcher
RSS Feed
Share
Link
Embed
From February 9-12, some of the world’s biggest names in skiing and snowboarding will be returning to Utah. Over the past years, this particular stop has proven successful—breaking attendance records daily and providing Snowbasin with a ton of exposure. In order to learn how this competition found its way to Utah, I met with the guys behind the scenes and spent a day on the hill. 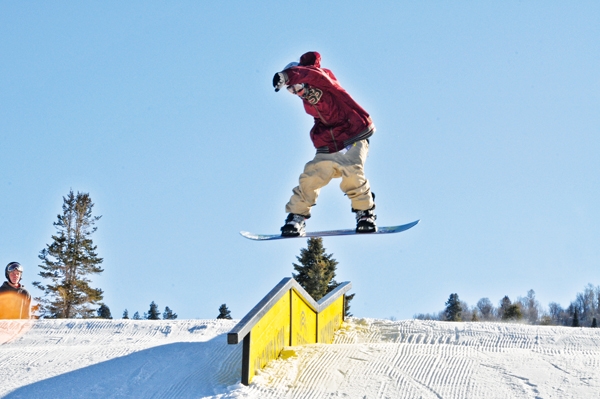 From February 9-12, some of the world’s biggest names in skiing and snowboarding will be returning to Utah. For the third consecutive year, Alli Sports Winter Dew Tour will be holding its competition at Snowbasin. This year, like last, Ogden’s resort will serve as the final venue for the three-part series. With an estimated influx of up to 45,000-plus spectators expected over four days, a ton of coordinating and planning has to take place to ensure that the event exceeds expectations. Over the past years, this particular stop has proven successful—breaking attendance records daily and providing Snowbasin with a ton of exposure. In order to learn how this competition found its way to Utah, I met with the guys behind the scenes and spent a day on the hill. I had been to Snowbasin before, both on assignment and through on-snow demos, and while I did get to explore a little of the mountain, I had no idea what this place really has to offer. I remembered, however, that they had the greatest porcelain thrones in one of the classiest lodges I had ever seen.

As myself and photographer Jesse Anderson arrived, we were greeted by Jason Dyer, public relations and marketing manager. A one-time aspiring professional and now a veteran in the industry, Dyer was hired on last year. After getting bored of his sales career, Dyer was eager to get back into the marketing side of the industry. After a few phone calls and numerous interviews, he was hired with the intent of expanding Basin’s image as a “family-friendly, youth-oriented resort.” Using his contacts from the past year, Dyer was able to put Basin back on the map in terms of media exposure. By getting photos in major publications and setting up future shoots, Dyer’s goal is to let the people know that this resort is not just for your mom and dad. “We want to be an all-encompassing family resort,” he says. While the parents are out enjoying wide groomers or open powder bowls, the little tykes can spend the day lapping the parks. The Dew Tour especially plays a large role in helping establish the resort as a legitimate, park-friendly mountain. And with that being said, we were given a couple of day passes and sent out to meet up with the terrain park manager.

Tim Eastley came to Snowbasin about four years ago. He got his start as a park manager by chance. While working at Seven Springs in Pennsylvania, Eastley was approached to help build some features because of his competitive boarder cross experience. “If you hit them, then you should be able to build them,” explained his manager. Turns out he was right in this case, and Eastley slowly began to assemble a park. As his skills improved, so did the resort’s reputation. Word spread quickly, and soon he was offered an opportunity to help rebuild Breckenridge’s terrain parks. It was here that he was able to hone his skills and meet some of the industry’s major players, including Snow Park Technologies, the same guys that design and build each year’s Dew Tour course. When he was offered the job at Snowbasin, Eastley jumped on the opportunity to, once again, turn a resort’s image around. Since his hiring, Eastley has increased the number of terrain parks and their features exponentially. This year, Basin will have five parks open, ranging in size and difficulty, including a 22-foot half pipe and jib garden.

With a few of his team riders, we were off to explore the terrain. Despite a lack of natural snow, conditions here proved to be a little better than the Cottonwood Canyons that I had been riding for the past few days.  After we cruised high speed rollers to the site of the future half pipe, I learned why. Snowbasin has the second largest snow-making system in America (with its sister mountain, Sun Valley, holding number one). Eastley explained to me that, with or without the weather’s cooperation, they would still be able to build all the features designed for the Dew Tour, even if they had to start blowing snow two months prior. Setting up such a course is no walk in the park. In order to get the features up to specific sizes, over 60 million gallons of frozen water must be farmed and moved and then shaped. “They’ll bring out four groomers and the 22-foot pipe dragon is brought in from California,” Eastley says. The build process takes a total of two-to-three weeks around the clock and will continue up until the first day of the contest. After the tour, the half pipe and actual slope-style course will be open to the public for the rest of the season. In the meantime, we were left to play in the small and medium sized parks and jib garden, whose setup, Eastley tells me, has changed over six times so far. This allows them to make weekly park edits for the team (also a first this year) without the features getting stale. This seems hard to do when you have over 55 features at your disposal.

As we passed the high-powered snow blowers, we saw, to the skier’s left, the awaiting slope-style course. Directly below the pipe is an unloading chairlift and parking lot. Due to the setup, the Dew Tour is a natural fit. The lift provides access from the base lodge and the lot allows for ease of “load in and load out” of equipment for the contest itself. When Alli expressed interest in having Snowbasin host the tour, it was a no-brainer. “I had good working history with the SPT guys and, logistically, it made sense,” says Eastley. Not many resorts would be able to house an additional mass amount of people, but Basin’s setup allows the event to be “self-contained” as Dyer put it. This allows people easy access to the events without taking away from the mountain’s regular visitors. “I actually urge customers to come up and ski during the tour,” Dyer says.  The venue also provides the best “TV look.” Sunny skies, condensed fans and great snow conditions allow for max exposure, as the events are broadcasted live. “We have the greatest mountain operations staff I’ve ever worked with, from the lifties to the managers,” Eastley says. This allows the event to run smooth, constantly. All these factors combine, and this is why Basin is the championship stop on the tour.

After a full-day tour of riding with some ripping kids and chatting with Dyer and Eastley, I realized that Snowbasin isn’t just a skier’s resort. These guys are working extremely hard on turning the resort into a player. “The South has Snowbird and Brighton, the east Park City, we want to be that for the north,” Dyer says. With an expansion of freestyle parks in addition to any natural terrain imaginable, they should have no problem fulfilling this dream in the next few years. So, before the Dew Tour comes to town from Feb. 9-12 and exposes our dirty little secret to the world, I suggest you take the hour or less drive north and experience Snowbasin for yourself.