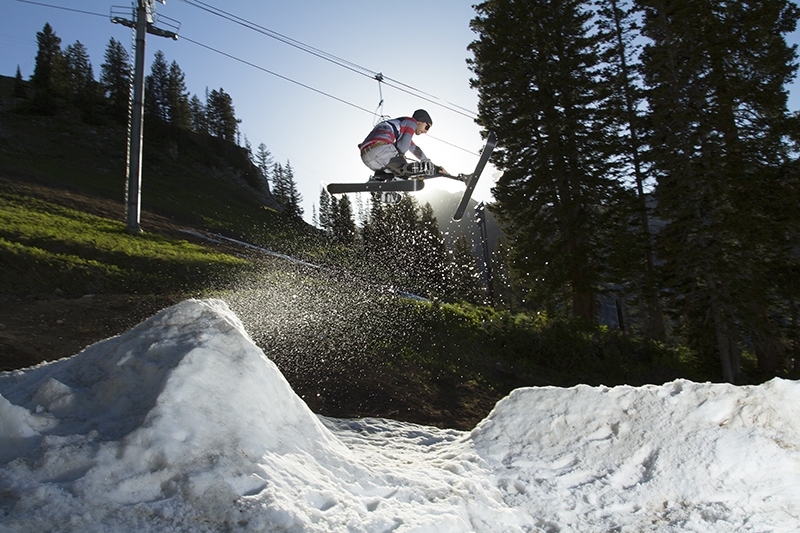 “Ski bike … It’s what you think it is,” says Cameron Wood, local BMX pro (S & M, Lotek, Shitluck), as he explains his new product.  “Literally, a ski (or skis) on a BMX bike.” My jaw drops while my brows furrow, and the questions begin …

Skis on bikes first came about in the 1920s when some joe schmoe decided to get creative with his road bike and a set of skis. You might remember seeing a ski bike in John Cusack’s 1985 cult classic, Better off Dead, as a persistent newspaper boy chases him down the slope screaming, “Two dollars!” Shredders weren’t content with standing sideways on just one type of terrain, which has resulted in skateboarding, surfing and snowboarding. Wood and his friend, longtime local BMX rider Greg Ingersoll, felt the same way about BMX. The pair got their first taste of ski biking when local BMX lord Matt Beringer mounted a few of his bikes with skis and would just mess around. “We’ve been playing with skis on bikes for about eight years,” says Ingersoll.
Waves of backlash surfaced from the local BMX community about how BMX skis would “never work,” but Wood and Ingersoll believed in the project. “I think it’s never taken off because there hasn’t been the right market or the right time for it. Also, a lot of parts makers think it’s too expensive because a ski mount means more manufacturing time and material cost. For me, making a BMXS [big mountain cross ski] mount is a relative cost to time versus material/labor cost, as anything else in the business,” says Wood. He is the owner of The Wood Shop, a BMX store/woodworking shop where he provides all the BMX fixings and needs, including woodworking objects that he has crafted himself (all of his displays are made from pallet boards by hand).
The mechanics of a ski bike are simple: Instead of the two wheels on a BMX bike, you have two skis. Last year, the duo made their first prototype of what is now called the BMXS mount, which attached the skis to the bike. The ski mount that Ingersoll and Wood have created is a bit revolutionary for the ski biking genre, which is one reason why they believe the time is right to market this now. “Instead of having a compartmentalized mount alongside shocks, we’ve made a simple one-piece mount and omitted shocks altogether. That setup provides the stability needed to ride on snow according to the conditions of the day, and all you need to change is the type of ski,” says Ingersoll.
Wood and Ingersoll decided that ski biking was way too cool to stay quiet, and, this year, started creating a line of ski bikes under the moniker Outlaw Union. “Riding a ski bike is like being a kid again,” they say. “Every feature, every trick, even the downhill is inexperienced. It makes BMX new again,” says Ingersoll. Ingersoll and Wood are building the Outlaw Union BMXS line slowly and organically. Last year, they took their bikes up to Brighton Resort and, like any other rider on the hill, varied their day with riding tree lines, hitting the park or just bombing the groomers. “Every time we took our bikes to Brighton, a crowd swarmed us, asked us questions and were curious about what the hell we were doing,” says Wood. The reaction at the resorts is also what gave Wood and Ingersoll the confidence to make ski biking something legitimate. When asked about tricks and riding techniques, both responded with, “We ride boxes, have hit rails, but ski biking is so new that we are just learning what we can do, which is what makes the sport so much fun.” Wood says that the best trick that he’s done is a smith grind on a half-moon monkey bar.
Wood and Ingersoll are great business partners, and approach marketing the BMXS line step by step with no outside financial help. “Because we see the potential of ski biking and have already used so much of our time and resources to begin building Outlaw Union, we don’t just want to hand it over to someone else to make decisions because they have contributed more money. We want to grow this [and] want to market this—we are still way too invested,” says Wood. To help get ski biking off the ground this season, they will have a booth at Brighton Resort where they will offer ski bike rentals and lessons to anyone interested. FYI, because the discipline is so new, they recommend anyone who tries it wears a helmet and pads. Next year, they hope to have a solid BMXS team in place, videos available and advancement in their unique line of Outlaw Union ski bikes. Right now, ski bikes are available for purchase at The Wood Shop (2212 S. West Temple) without the benefit of instruction on the hill. As for where they think ski biking could go in the future, the sky is the limit. Wood says, “Ski biking could be really big. It would not be surprising to see it become a serious winter sport with solid competitions or maybe even Olympic participation.”
Follow the development of Outlaw Union BMXS online at outlawunion.com, and don’t forget to catch these guys at Brighton Resort this winter.
Photos: