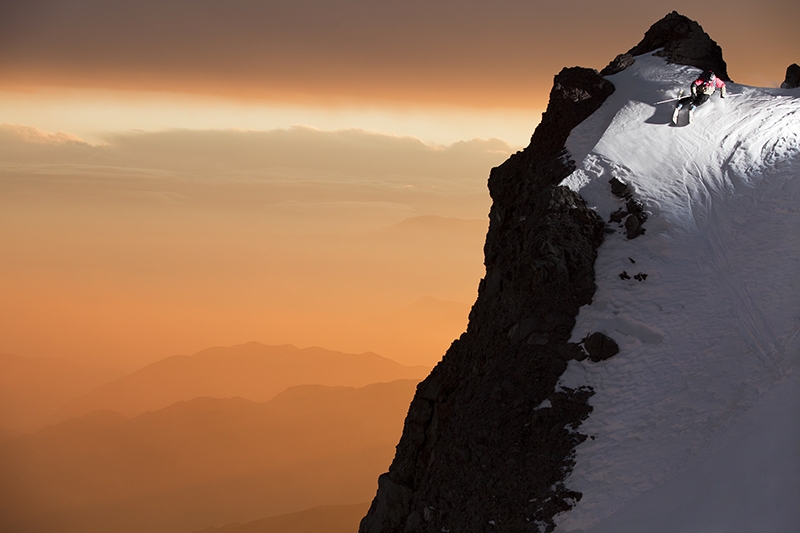 How do you become a professional skier? Well, for Parker Cook, it sure helped that he started shredding at the age of 2. While you and I were crapping our pants and cramming fingers in our noses, he was pizza and French frying down the slopes with his dad at ParkWest (now The Canyons). The turning point for Cook happened a handful of years later when he was badgering his pro-skier friend, the late Billy Poole, for a pair of free skis. “I was like, ‘Give me some of your skis,’ and he was like, ‘No, you’ve got to get ’em on your own. You’re good enough.’ And that’s how the ball got rolling,” says Cook.

Roll, it did. Whether it’s his big mountain skills or his laidback, fun personality, Cook reeled in the sponsors. He currently represents Icelantic Skis, POW Gloves, Bern Unlimited, Discrete Headwear, Obermeyer, Char Poles, Coalatree Organics and Alta and Snowbird resorts. If that’s not an impressive resume already, the guy snagged the honor of being in one of Skiing Magazine’s Top 8 Photos of 2013. When asked how that felt, Cook says, “I’m so psyched! Capturing ski imagery is a thing I’ve zeroed in on, and having that honor is so cool.”

When he’s on the hill, a big part of what Cook vibes off of is the company. “It’s definitely a group dynamic for me. If I’m with Rachael Burks, Julian Carr or certain friends … that energy is real. Some of the gnarliest things I’ve ever seen or been a part of are because of the group,” he says. It was that very group dynamic that led Cook to discover his now favorite spot to ride. “It’s called the Cable Ducker at Snowbird. It’s this diving board from Rat’s Nest into the top of Hanging Bowl. You air 30 feet into it, then you get these three fresh turns that no one else will ever get,” he says.
Before you pigeonhole Cook as a ski bum, hear this: The guy has his own furniture business. Yes, you read that right—it’s called Parker Cook Design. “I think it balances me out. A typical day might be waking up and doing these gnarly [ski-related] things … sometimes it might be a sketchy air, or a line that’s scary, or the snow pack might be sketchy. You’re trying to create images that people want to see and not everyone can do, and it’s intense. I come down here to my shop, and everything is in my control. I can listen to my music, I create what I want for people and it’s this complete opposite,” he says. Tucked back in a small space in industrial South Salt Lake is Cook’s workshop, a place that gives birth to handcrafted, custom furniture. Starting out as a creative outlet, his hobby quickly morphed into a money-making enterprise. “I always built stuff for friends, and one day, I was in a furniture shop in Sugar House and overheard a lady complaining about this table that was too big. When the saleswoman walked away, I tapped her on the shoulder and was like, ‘I’ll build that for you.’ Since the day I talked to that lady, it just clicked. I never thought in a million years I’d be fascinated by furniture or how a room is put together. I just love it,” says Cook.
Cook’s furniture is a unique combination of wood and metal that exudes a warm, urban feel. “I’m really proud of this new stain that I’ve made. I vinegar-burn the wood, and different woods take on different burns. It’s basically steel wool, rusted nails and pennies. I love experimenting with stuff. There are basic shelving and tables that I do, but I always try to find something more challenging for me that the customer might want,” he says. Basically, if you can dream it, he can do it. The best part of Cook’s life seems to be his ability to design it just the way he wants it. “I can ski all day and then come in when I want. I don’t even consider this work. I like doing this and I like making people happy,” he says.
With a successful skiing career under his belt and a promising furniture enterprise on the horizon, Cook is pretty much nailing it. His version of the future is taking Parker Cook Design to the next level: a bigger shop, a couple employees—the works. “As far as skiing, I want to always shoot because I like photos so much. I do feel like you gotta know when to fold ‘em. I know it’s close. I’m not under any illusion that it’s gonna last for too much longer, but for right now, it’s going really well. I have more shots in magazines than I’ve ever had before, and I have better relationships and better contracts than I’ve ever had,” says Cook.
To see Cook’s handiwork, walk your fingers over to Instagram @parkercook or search #parkercookdesign, and follow him at pcookdesign.tumblr.com. If you feel like physically feasting your eyes on his stuff, check it out at Bodega, NATA Gallery Restaurant, Sushi Groove and Ruth’s Chris Steak House in Park City. You can also reach him at pcookdesign@gmail.com. Keep on living the dream, brother.