00:00 / 16:39
Spotify Stitcher
RSS Feed
Share
Link
Embed
Often overlooked is the Private Investigator skillset that snowboarders (and skateboarders) develop to put themselves in the dangerous situations they often find themselves in. The Salt Lake Public Library, for example, is pretty much the Disneyland of spots in this town, but it can also be compared to Fort Knox for its security. 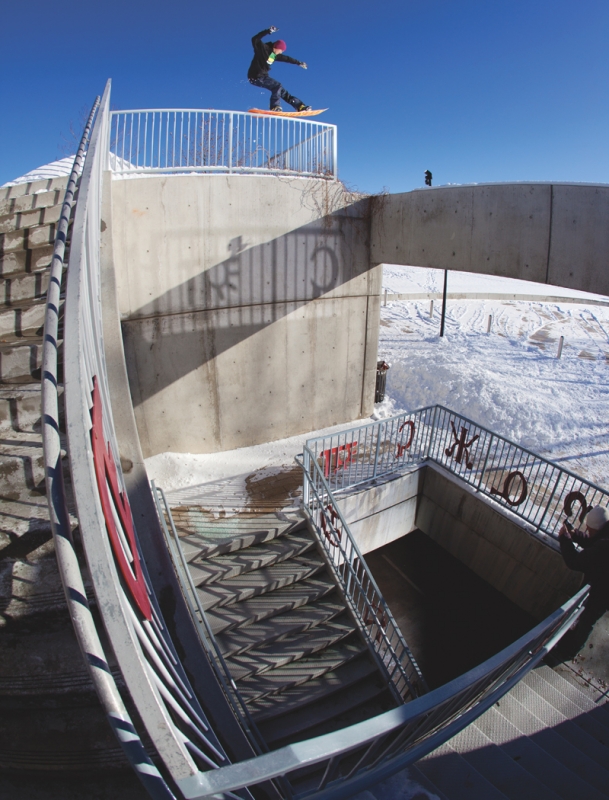 A lot of kids grow up with the dream of becoming a professional snowboarder. While I’m never going to be one to naysay their dreams, the reality of it actually happening is becoming more and more slim.

There’s a joke among many professional snowboarders that, if for some reason their careers don’t work out, they can find work as stunt doubles in Hollywood. There is a lot of truth in this joke––I think a lot of them would prefer to have an airbag waiting to break their fall as opposed to a few inches of snow on top of concrete. What’s often overlooked is the Private Investigator skillset snowboarders (and skateboarders) develop to even put themselves in these dangerous situations. Let’s take the scene of this photo: the downtown Salt Lake Public Library. It’s pretty much the Disneyland of spots in this town, but it can also be compared to Fort Knox for its security. To get a session here, you gotta be really quick and really lucky. Or, after watching enough CSI, you put those skills to work and stakeout the building. It doesn’t take long to figure out the security shifts, what rounds they travel and the placement of security cameras. The building closes early on Sundays, so security is minimal. Same for late night, but you draw a lot of attention setting up lights and a noisy generator. Soon it becomes apparent that holidays are your best bet: Even the most low-level rent-a-cop gets Christmas and New Year’s Day off. I’ve had success here on both of those days––all you need is snow and the will power to take it mellow with the bottle on the night before. Good luck with that second one, because as most P.I.s will tell you, the secret to a good stakeout is always plenty of booze.