Just imagining all of the boring shit the world needs people to buy is enough to make a person want to puke—there is a tradeshow for nearly everything. Luckily for SIA (SnowSports Industries of America), the industry is winter sports, the people are fun to talk to and the product is even better. This was SLUG’s 2014 trip to The SIA Snow Show in Denver, Colorado. 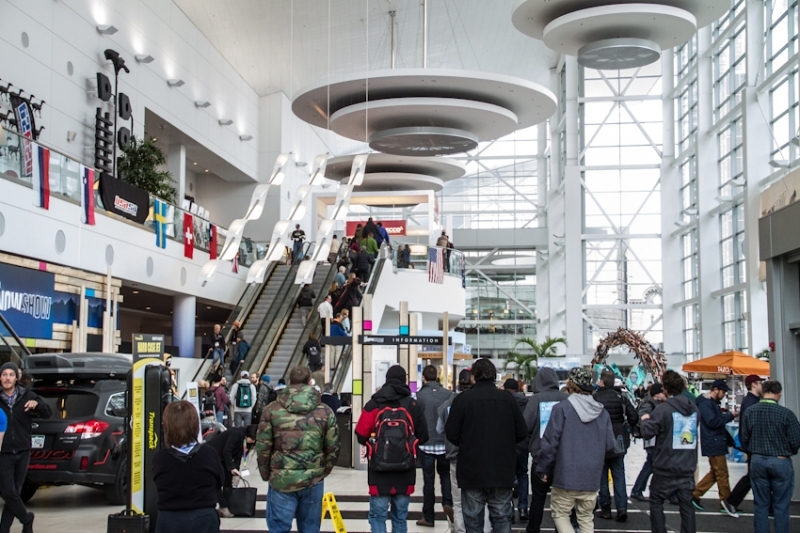 Every morning around 8:30 a.m., hundreds of people enter the Colorado Convention Center ready to buy, sell, or cover the new products hitting the market next fall. Photo: Jake Vivori

In whatever industry one finds themselves working in, they’ll inevitably end up at that annual trade show the boss sends a few lucky reps to peddle next year’s products and technologies. Some folks sell guns, some fridges, a few will sell food, cars and everything you find in the dollar store. Just imagining all of the boring shit the world needs people to buy is enough to make a person want to puke—there is a tradeshow for nearly everything. Luckily for SIA (SnowSports Industries of America), the industry is winter sports, the people are fun to talk to and the product is even better. This was SLUG’s 2014 trip to The SIA Snow Show in Denver, Colorado.

Thursday, Jan. 30 began the show kickoff. As buyers and media persons filled the biggest makeshift ski mall in North America (aka the Denver Convention Center), thousands of eager businesses awaited the debut of their immaculately designed showrooms for the prospects and existing clients of 2015.

Walking into a convention space like this is extremely overwhelming—where do you start? Meetings are convenient, but they make for a selective attention that misses the good stuff. For instance, Carl Zeiss has been a big name in eye lenses for years, but the concept has broadened into goggle vision that has been bought out by any company smart enough to drop that extra penny into their product. Just ask the people at POC or Giro. Not only will the new and improved Giro goggle line expand your sights, their famed helmets are up a notch, too. The Combyn helmet, which would’ve made Sarka Pancochova’s Sochi Slopestyle concussion look like a walk in the woods. Giro calls it a VN (Vinyl Nitrile) liner, but this revolutionary helmet boils into a high-density, yoga-mat-ish liner that replicates a memory foam mattress on weed (Colorado joke). The Combyn slows down and absorbs the fall fluidly rather than taking a noggin hit using traditional styrofoam composites.

Helmets and goggles do the trick, but it’s the rest of the suit that keeps us warm and looking good. If you’re trying to do any of the aforementioned, don’t get the new Shaun White Outerwear Collection. Add a red rubber ball in your mouth and this leather comes off as some kinky bondage for your half pipe nightmares. I would personally send the consumer towards either the 2015 Roxy (women), i.N.i Cooperative (men) or Holden (men & women) lines, which accommodate both quality and tasteful adornment.

Covering outerwear leaves little left to talk about but the toe, and what would be better than a pair of socks with a lifetime warranty? Darn Tough is a company out of Vermont who obviously pride themselves on quality. On top of boasting one of the highest stitch counts for a sock, the product is made in America and it shows no seam. Anya, the sales rep, even made a point to say that if I were to buy a pair of Darn Tough socks for each day of the week, I’d never need to worry about buying socks ever again—damn, that’s a claim.

Did you ever see the movie iRobot? Beartek gloves will turn a person into a cyborg. Imagine if your hands could wirelessly control a GoPro or Smart Phone by touching your thumb to all fingers minus the pinky. The technology is there, let’s see where it goes in the next few years. This product is so cool that SAGA Outerwear must have brought it back from their Back to the Future Delorean parked in the SAGA showroom all weekend long, complete with hover boards.

All of the shiny new things and business schmoozing is one thing, but what really caught SLUG off guard was the apparent emphasis of board incorporation into SIA’s 60th anniversary showing. It started with the wall. The wall plainly stated, “Snowboarding is … ” and was filled in by hand by anyone and everyone who had something to say. Consider any quotes vividly describing blowies, face shots, powder, pictures, equality and most emotions straight from the … heart.

SIA has positively slammed prospective and reputable snow sports retailers to the snow show floor. As every snow sport grows, people are finally seeing a need for common ground in order to build the cause, from SIA’s CRAFT Exhibit featuring the underdogs who manufacture under their own means, to the nonprofits who enable humanity and promote better ways, to the established names that continue to mingle or shake up preexisting trends. This industry, no matter how divided throughout a season, will always share the connecting experience that is SIA. Check out more photos by Jake Vivori here.