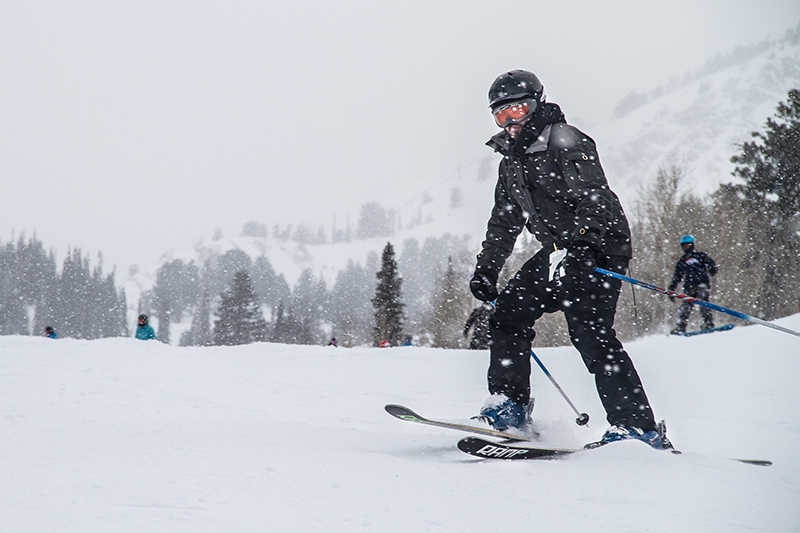 My dad tried teaching me how to ski a couple times in elementary school and in seventh grade, and it didn’t take. Being in junior high in 2001, snowboarding naturally appealed to me as the cool alternative, and I was off hitting rails with my homies up through when I graduated high school. Once I hit college, though, it got a bit out of my price range. Also, I just couldn’t hang with the hippie/$wag feel of it all—Bob Marley’s alright, but not in excess.
Ironically (yet antithetical to the snowbro endemic), I became inspired to pick up skiing by my dentist. Between making fun of his assistants, he’d grace me with stories of his days on the hill as an early-20s ski bum who, on his free time, rocked out to Angry Samoans and Social Distortion. This mentality spurred me to switch gears and take back skiing as a retro-fitted sport for a dude who wants to experience the snowy mountainside in a way as close to an Immortal music video as possible—a rocker on the ridges. I felt compelled to defy the disingenuous liberal attitude that snowboarding connotes for me, but also to redefine skiing as something other than being for older folks, faux, white thugs with saggy ski pants and trust-fund frat babies. Though I know it’s an expensive hobby, I romanticized the days when “ski bums” lived up to their name, and wanted to re-appropriate skis and poles from privileged means for entertainment to weapons of carnage to pillage the ice amid mountainous splendor.
I went to pick up my skis directly from the RAMP Sports factory in Park City, Utah, and RAMP Communications Director Vanessa Pierce was nice enough to let me peek inside. Amid the mind-blowing machines and technology, I saw all the materials used to make RAMP skis and snowboards—most notably, their bamboo cores. Vanessa noted that RAMP is proud to create their gear in the USA to the fullest extent possible, and elucidated the benefits of using skis made with bamboo at their cores—it pops you back and forth from turn to turn! It was love at first sight when I laid eyes on my Woodpecker 159s featuring the eponymous bird at a tip, red clouds and a dark, heavy metal forest. It took every ounce of me not to head up the mountain as I carried them outside.
Once I got these bad boys mounted, I was ready. I had initially learned to snowboard from lessons at Snowbasin, and it took only one of their lessons to send me on my way. I knew that this northern resort was where I wanted to learn to ski, and I enrolled in a couple lessons and headed up to the resort one Sunday. (Note: I have confirmed that Skeletonwitch’s Beyond the Permafrost is the perfect pre-game album to get stoked for winter sports.)
Once I got in line for the adult classes, I met Roy Stam. Roy’s the type of guy who enjoys a beer or two after carving down the slopes and has a grandfatherly charm, and we hit it off immediately. Coming onto the Little Cat run, he showed me the art of stopping by using the wedge technique, and he demonstrated going from big wedge to little wedge (as he called them for me in “adult” lessons). I kept sticking my butt out, and Roy corrected me by saying that “It’s like sex!” to get me to straighten out a bit. I still don’t know what he meant, but it worked.
The day of my first lesson was fairly blustery—the wind was kicking up the snow in satanic fury. Roy, however, did not relent. He showed me the fluidity of big turns of connecting Cs into a continuous, repeating S shape and into tighter turns. I knew that I was making progress after a few runs when Roy started throwing big words at me like “angulation” wherein I’d dig in the inside edge of my down-facing ski in a turn. Hell, he even began a tutorial on  “flexion” and “extension” for me, a beginner.
For my second lesson, instructor Ann Gavin demonstrated how to put flexion and extension into practice while turning. I followed her lead as she rhythmically bobbed up and down, and I felt myself gaining momentum as I carved. It wasn’t long before she took me up the Becker chair. Though the runs were a bit icy that day, her calm demeanor helped me navigate some of the more spooky bends around the mountain effectively.
As I was learning a few times, the wind whipped up in the storm and flurried sharp daggers of snow upon my face. I peered to the mountain within the borders of Snowbasin as a beacon of the wild, where the runs were the liminal pathways to a winter outdoor experience, and I yearned to climb higher; I looked to my RAMP skis, dual blades whetted for excursion and headed for the lift, eager to keep learning.
I’ve always sensed that skiing is the more effective way to traverse ’tween the trees, and I now feel like I can get my fix of being outside and exercising in the mountains without acquiescing the stock personalities of the typical conception of skiers. Once I get my ski legs, I hope they don’t mind (too much) me rehearsing for the Heavy Metal–style ski movie I want to make as I slash my poles around like swords.