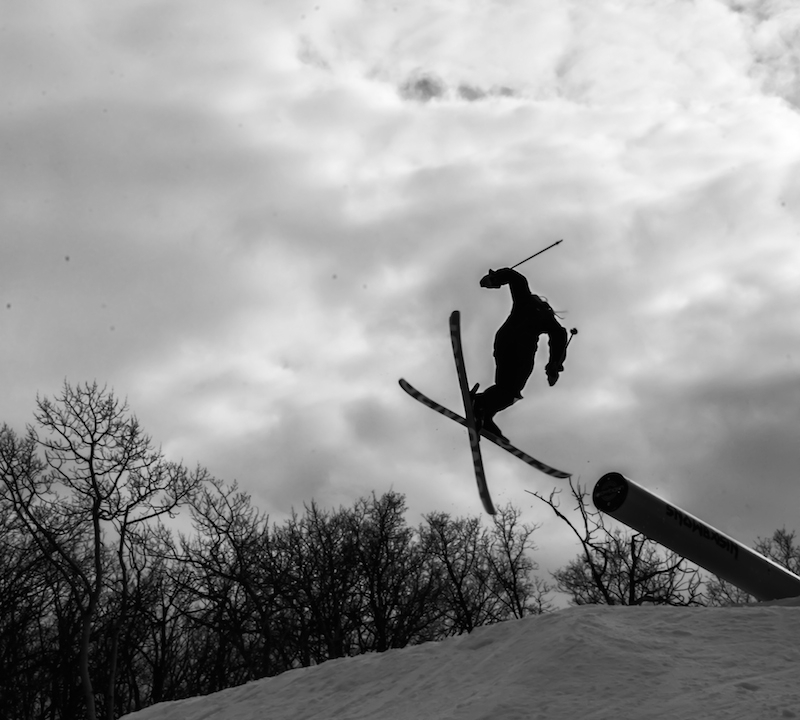 360 off the poll by this year’s number one in Men Open Ski division - Jake Lewis. Photo: @cezaryna

The crowd huddled together this past Saturday, Jan. 10, as they watched the winners of SLUG Games: Battle at Basin Presented by Ken Garff Fiat—SLUG’s 15th Annual Ski and Snow Comp at Snowbasin Resort—get crowned and receive their awesome prizes. It was definitely a stiff contest for both skiers and snowboarders alike.

All around, the competitors showed up with impressive tricks. The talent from action sports athletes just keeps getting better, year after year. Contestants were throwing all kinds of killer tricks, from rodeos to misties to clean, solid methods with transitions. The riders were showing off such skills that the judges started to have some fun by offering their personal cash on top of that offered by Ken Garff Fiat for those who could throw down whatever trick was called out by the emcee.

It’s not hard to believe that the SLUG Games Staff starts planning the competition course months before the event happens. Actually, they typically start thinking about the winter games as early as August. This year, the course was fantastic. The riders’ first obstacle was a considerably sized step-down pole jump, flanked by two angled boxes. Skiers and Snowboarders took full advantage of this opening feature, as they would use the obstacle to announce how styley they are with jibs, launches and twists. One snowboarder went so far as to jump over one of the boxes, do a cartwheel to the other side, then hop off the opposite angled box.

As soon as each competitor rallied with their opening entrance, they then faced a waterfall rail or a down flat down box. This choice became very tricky for some athletes, as it appeared to be a challenge on how to approach each feature the best way possible.

All competitors were judged on three things—creativity, style and technicality. The judges were in favor of those who took chances. If a rider fell, it wasn’t the end of the world—being ballsy was appreciated. To solidify how much they liked competitors taking risks, the judges awarded “Best Crash” to Dylan Hartsell and “Best Trick” to Jack Cornell, who managed a sweet Backside Bluntslide sameway 270 on the down-flat-down feature. Of course, what made the difference in who won and who didn’t were those who seamlessly and consistently combined the three qualifications of style, creativity and technicality.

The women competing in SLUG Games freaking rocked. They held their own alongside the male competitors. Not that they were literally competing against the guys, but each heat included males and females trying to smash. A lot of the ladies had serious finesse and grace when it came to transitions and grabs. First Place of the “Women’s Open Snowboarding” category went to Lynn Neil for a switch front lip to rail, which she thinks gave her the winning edge. “I felt really good about that trick,” says Neil. Second Place went to Taylor Mattingly and Third Place to Annie Glissendorf. Winner of the “Women’s Open Ski” category was the amazingly talented Brooke Potter. Second Place was awarded to Alexa Juncaj and Third Place was awarded to Cynthia Hurst. The First Place for the “Women 17 and Under Ski” category went to Wynter McBride, and Second Place to Morgan Lyman.

For the men, both skiers and snowboarders showed a lot of gumption, whipping off the first pole jump then showing their sleez throughout the rest of the course. Winner of the “Men’s Open Ski” division was Jake Lewis, who not only wore impressive denim overalls, but landed a sick front misty out, as well as a back 360 off the pole. Lewis definitely caught the attention of the crowd (and judges) with his self-assurance on the course. Considering he was the leader of the group, Lewis surprisingly said he was “nervous and a bit intimidated by the features.” Second Place for the Men’s Open Ski category went to Brighton kid Walter Shearon and Third Place to Chris Dakoulas. First Place for “Men’s 17 and Under Ski” was Jackson Jenkins, Second Place went to Milan Peylin and Third Place to Tanner Kelsey.

Sam Klein, First Place winner of the “Men’s Open Snowboard” division has only been riding for the past five or six years. His winning combos? “Linking back flips to stack rail tricks,” said Klein. Second Place in the Men’s Open Snowboard category went to Brian Skoropsia and Third place—well, it was a tie between Sammy Elliot and Griffin Lancaster. “Men’s 17 and Under Snow” First Place was awarded to Jacob Ferrel, while Second Place went to Patrick Martin and Third Place to Max Kozlo.

Each podium honoree went home from the games with not only their title and a boost of confidence, but also with plenty of sponsor swag—and skis from 4FRNT, boards from RAMP Sports and cash money from Presenting Sponsor Ken Garff Fiat of Salt Lake.

Check out our full gallery of photos here.