On January 14, the 12th Annual SLUG Games went undead with Dawn of the Shred, presented by Budweiser, at Brighton Resort. No skier, snowboarder or snowblader was safe from the fury as hoards of local talent ran rampant through the course built by Brighton’s superior Zombie Response and Terrain Park crew.

SLUG Games: Dawn of the Shred 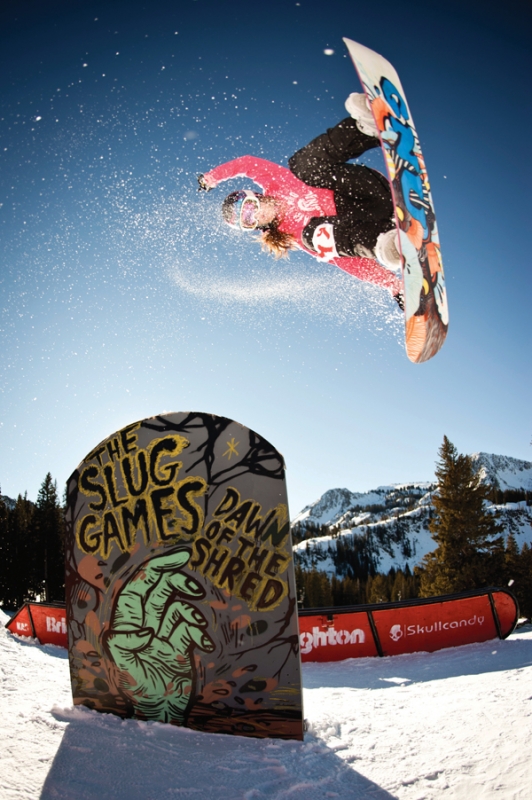 On January 14, the 12th Annual SLUG Games went undead with Dawn of the Shred, presented by Budweiser, at Brighton Resort. No skier, snowboarder or snowblader was safe from the fury as hoards of local talent ran rampant through the course built by Brighton’s superior Zombie Response and Terrain Park crew. On deck with the wheels of steel was none other than DJ Matty Mo, keeping our brains full of music from dawn ‘till dusk. Once warm-ups finished, a huge crowd gathered at the tent village to watch the carnage. The suave and sexy MCs Garrett Bright and Trevor Hennings took up the mic and thus began the Dawn of the Shred.

This year’s course, located at the top of the Majestic terrain park, was a one-hit mini park consisting of a double rail, double drop flat rail, wall ride and a tombstone bonk built by the SLUG team and painted by Mike Murdock. With a jam session format, skiers and snowboarders rode in the same heat, but were judged separately by skier and snowboarder judges. The contest started off with the 17 and Under Ski and Snow division.

As per usual, the competitors in the 17 and Under division put on a show that rivaled the Open division. At the beginning of the heat, the double rail set saw the most action. As riders became more familiar with the course, they started taking more chances with the tombstone, which came with some bad consequences for those not carrying enough speed. Snowboarder Austin Roderick pulled off a 50-50 front flip out on the double rail set, and skier Jeremy Tidwall went to the skies for a 720 over the tombstone.

In the 17 and Under snowboard finals, Skye Salisbury took third after an impressive and consistent performance. Austin Roderick took second place after stomping a 50-50 front flip out on the double rail set, which impressed all of the judges. Finally, Jayden Naylor sent his tricks above and beyond the rest to land him in first place.

For the girls, snowboarding is all about sisterhood, and there are two sets of sisters who have been dominating the SLUG Games for a while: the three Mayernik sisters and the three Mattingley sisters. Saturday’s contest saw all six girls competing and dominating. In the women’s open snowboarding, Grace Mayernik landed herself in third place. In second place was Hailee Mattingley after some daring spins over the tombstone, but it was her sister, Taelor Mattingley, who came away with first place honors and a board from RAMP at the end of the day.

The Open Ski and Snowboard divisions ran together, and with the jam session format, things were popping off like Orville Redenbacher. One of my favorite tricks of the day was snowboarder Justin Aday’s Superman-style, laid out front flip over the tombstone. Not long after, skier Cj Bode landed a Cork 720 over the tombstone that made the crowd go nuts. Snowboarder Tucker Brown landed a 270 to frontside boardslide on the double rails, landing variations of the trick throughout the first heat.

For the Open Ski division, skier Alex Buller landed a switch 270 to pretzel 450 out on the double drop flat rail, plus a couple switch ups after hitting the rail from the hip, landing himself in third place. Walter Shearon proved himself to be master of the 450, landing multiple in and out of slides on the double drop rail, putting him in second. Trevor Akimoto, defending SLUG Games champion for the 17 and Under division, proved himself this year as the Open division champion. He earned first place and a pair of RAMP skis after a 900 and a rodeo 540 over the tombstone, multiple 270s and a 450 pretzel out on the double drop rail.

After a while, some of the snowboarders started breaking out their slew of one-footed tricks, which are always fun to watch. A few tried foot plants on the tombstone and spins into the wall ride feature, but it was snowboarder Andrew Aldridge who came away with the best trick of the day with a one-footed boardslide on the double rail set with his back foot hovering in the air. He walked away with a new board from RAMP for the trick.

After the contest was called, we warmed up our spectators for the awards ceremony with the product toss. There’s just something about free t-shirts flying through the air that makes people go crazy. After our arms were sore from throwing things at people, the MCs got back on the mic and announced the podium winners for the day.

Big shout outs to all of our sponsors, volunteers and the Brighton Terrain Park crew—this contest wouldn’t have been as great as it was without them. The SLUG Games: Dawn of the Shred was presented by Budweiser. The contest was sponsored by City Weekly, Discrete, RAMP, War Regime, Salty Peaks, Saga, DaleBoot, Milo, Jackalope Lounge, Whiskey Militia, The Garage, Stoneground and Blindside.

Haven’t had enough SLUG Games? Prepare yourself for our second installment of the SLUG Games: Night Riders contest, happening at Park City Mountain Resort in their revamped Three Kings Park on March 10.