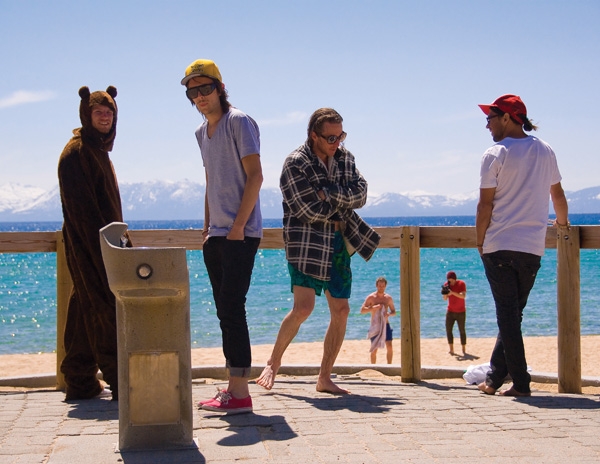 Sometimes I Wonder About Team Thunder

Nearly seven years have passed since a long-time group of friends deemed themselves “Team Thunder.” The name, which started out as a joke mocking a group of over-achieving students who called themselves “Team Lightning,” is now infamous for being one of the most influential local snowboard video production companies, as well as being known for their raw “make something out of nothing” attitude, with zero money from major sponsors. But, just like the Monica Lewinsky vs. Bill Clinton scandal of ‘98, there is always another side to the story.

It all started back at Brighton High School with names and faces that nowadays seem to be forgotten. One has since tied the knot, working a nine-to-five designing computer software. Another, also married, recently scored insanely high on the LSAT and has applied to various prestigious law schools. Last but not least, another original Thunder spends most of his days  fighting for human and animal rights, volunteering for numerous organizations and recently returned back to SLC after being invited to Mexico to speak at the Latin American Religion, Social, and Politics Congress, speaking about liberation theology in the Mormon church and how it relates to Zapatismo. Two of the three still find time to snowboard and continue to be some of the best riders around, yet haven’t had an appearance in the local videos in years.

There are mixed emotions as to why there have been so many drastic changes since Team Thunder’s first video, Timid and Tame. Is it because the original Thunders were too “timid and tame” to pursue a career in snowboarding, or do the words “‘til death do us part” play more of a role in families vs. a crew of  talented snowboarders, filmers and photographers that seemed to have a recipe for success?

Sean McCormick was once the main cameraman for Team Thunder Productions. Through his efforts, and after paying some long-term dues, he has recently been given the opportunity to film for a much larger, more sought after video called Videograss.

The concept behind Videograss is ironically similar to that of Team Thunder. McCormick says, “Videograss was started by Mikey Leblanc, Darrell Mathes, Nima Jalali and Lance and Mike Hacker, with Justin Meyer on board to be the head guy for editing and coordinating it all. It’s best described as a raw video that isn’t based around fancy filming and a lot of money. It has the snowboarders that we want, having fun. No matter what, that’s the bottom line.” Recently another friend’s video only containing homies has hit the scene, called Skeleton Crew. That video project was put together by Pat Fenelon’s once upon a time roommate, Evan Lefebvre, who ironically was surrounded by Team Thunder for close to six months. Now,   am definitely not insinuating any foul play because Lefebvre is a great guy who knows a lot of good people, and I believe that is the reason Skeleton Crew has had so much success. Cheers! It simply seems as though Team Thunder might have been on to something years ago when creating a video that consisted of friends purely having a good time without the need for fancy equipment and sponsorship money. But just like the batteries on McCormick’s old VX-2000, that can only last so long until something has to change.

Adam Morales was once a secondary Team Thunder filmer and when asked his opinion about all of the many changes that have happened to the crew, he simply said, “I don’t have a problem with it anymore. I did at first, but once I realized I couldn’t take out any more student loans to make films that I loved, I had to give I know the bear at the beach is weird, but what’s with the sexy beach bod scene getting filmed in the background? Not real sure where they’re going with this one. Morales went on to say that when he thinks of Team Thunder, he thinks of “friends having fun, or a bunch of kids I don’t know, depending on the day.”

So why does it seem that Team Thunder lacks consistency? If so, is that even a problem? A misunderstood perception is that a few of the new guys took over things and somewhat boxed out some of the originals, but given the opportunity to document the ever-changing saga that is Team Thunder by way of photography since day one, I will boldly state or otherwise clear up that Team Thunder is not exclusive, but rather very accepting of anyone and everyone wanting to have a good time on a snowboard. There are some that would argue against that, and one person specifically known for always saying exactly how he feels is the one and only Hondo. “They told Kyle Fischer he would have a part just so he would make them stickers, then they cut him out. Haha,” he says. I don’t know what really happened with Fischer, but he’s still a good friend to us all. Thanks for all of the stickers, especially the newly created ICP hatchet man FUNhat die-cuts.

Any day of the week, one can take a lap at Brighton Resort and meet up with friends that consider themselves part of Team Thunder. It is likely that they have had at least one shot in the friends section of one of the five Thunder videos since ‘03. Brighton continues to be the official resort sponsor and home stomping grounds for TT. Jared Winkler, the terrain park manager, has been extremely supportive of their efforts by offering them discounts or otherwise industry-rate passes in exchange for web edits on major snowboard websites such as Snowboardermag.com and Twsnow.com. Part of their annual SLUG Games contest series, Brighton hosted the Lumberjack Jam (judged & filmed by Team Thunder), which was a contest primarily based on creative features made out of logs inspired by Team Thunder’s famous “Logs” web edit that was included in the ‘05 release, Remember When. Nick Lipton, the infamous web master/smart ass contributor over at Yobeat.com admitted, “Somehow last year, I used the Team Thunder Brighton budget every day for two weeks. Team Thunder got in trouble for it. When I heard about the trouble, I asked Ben Gustafson if he used the Thunder passes too, and he punched me in the chest.” Aside from being one of the main riders, Gustafson has been one of the core driving forces behind TT since ‘05 when he purchased one of the first HD cameras and introduced it to the local snowboard scene. Gustafson’s creativity and willingness to make something out of nothing is one of the reasons that Team Thunder videos continue to be so entertaining. In ‘08, Ben and Eric Fernandez pitched in together to buy an ‘84 Chevy Beauville van. After applying stickers from what little sponsors continued to back up the team, they piled in the van with a few other friends, including Laura Hadar and myself, to take one of the most recent videos, titled Beauville. We hit the road towards Idaho to visit fellow Thunder, Martin Campbell, who is known for being the “only jumper in Team Thunder.” Martin’s parts continue to stand out year after year for his backyard and backcountry shots that are really one and the same. The Beauville trip was a success, stacking footage outside of Salt Lake and once again making an entertaining full-length video.

Will Tuddenham is a name that was once primarily affiliated with Team Thunder, but last year, he got a well-deserved break and was given the chance to film with the People. As for this year, he has been picked up by Videograss to once again film with old Thunder, McCormick and friends Jordan Mendenhall and Jon Kooley. There appears to be a trend in local friend videos being a stepping-stone to moving on to bigger and better. When catching up with Tuddenham I asked about his recent exposure, to which he humbly said, “Filming with Team Thunder helped me not only to understand how to actually film a video part and have a good time with it, it also helped me to get my name out there. Not like that’s all I was looking for, it just came along with it.” McCormick went on to say,“You have to pay your dues somewhere. I think there are so many good guys in SLC that are doing the same thing we did. Obviously, I’m super happy for Will since he has been a good friend over the past seven years or so, but I think it’s awesome what other crews are doing as well. Bozwreck spawned some really good guys like Cale Zima, and even though Keegan Valaika was doing things before, I feel like his part in Bozwreck II and landing himself on the cover of the August ‘09 issue of Snowboarder Mag blew him up. Dinobots have some really good kids too, and of course Variety Pack. Simply put, snowboarding is about having fun. Anybody can do it, even if they have to film a 25-minute movie in SLC. It’s about being creative and doing whatever they want to do. Team Thunder is the shit, even if they aren’t the best snowboarders.”

I caught up with Team Thunder rider/filmer/interweb hype guy Fenelon and asked about future plans for Team Thunder. He claimed that this year’s video is alive and well. After a few glasses of post-dinner wine, all he had to say was, “You just got to keep on givin’ ‘er’.” Despite the euphemism, trust Fenelon, and trust that Team Thunder will continue to set the bar high in creativity while having fun, which is the driving force behind their passion for slashin’.