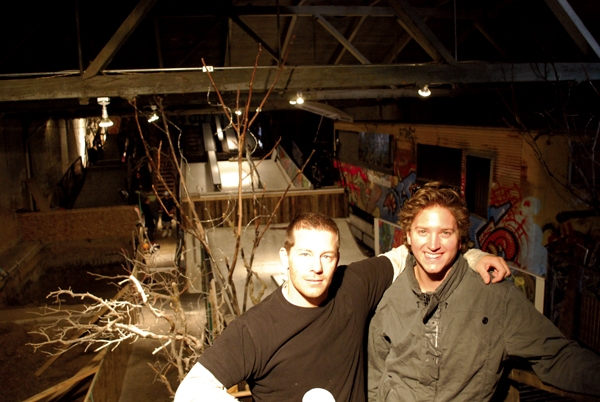 The Jibyard is Utah’s premier indoor rail park and ski/snowboard training facility.  Though it’s only been open for a little over six months, the brainchild of founder Brad Geiger and co-owner Mike White have been rapidly gaining recognition in the local shred scene.  Both Geiger and White have been actively participating in the ski/snowboard industry since they started and managed the DNA Evolution Tour, which toured from Utah to Massachusetts to California and back home again.  During that time, the wheels got rolling for their next collaboration.  Fast-forward four years and the Jibyard is now nestled into its home on 2450 Grant Ave in Ogden, UT.  Geiger expressed his opinion that Ogden was the best place to open the rail park due to the high volume of ski and snowboard companies that are beginning to move into the area.  Geiger also gives credit to the city of Ogden for helping White and him open the park.  On October 23, Jeremy Riley and I paid them a little visit to get a taste of what an indoor rail park had to offer.

Before we started our shred session, we met up with Geiger and White for a little heart-to-heart.  The first thing I learned about Brad Geiger was that he’s a serious dude.  He’s serious about the Jibyard, he’s serious about snowboarding and skiing and he’s serious about the culture. “I’m a purist when it comes to the culture and the ski and snowboard industry.  I’m not a big fan of companies that aren’t fully invested in it,” said Geiger. “This isn’t your little sister’s gymnasium or your beefcake brother’s weight room.  [The Jibyard] is really a place where kids have a level of pride about being a skier or snowboarder.”

“I’m a purist when it comes to the culture and the ski and snowboard industry.  I’m not a big fan of companies that aren’t fully invested in it.”

Here is the current set up:  You strap or click in (if you’re a skier) on the deck, then drop in onto the rollers, which take you down to the jib.  After completing the shred-tastic maneuver, you land on astro-turf, or “snow carpet” as I like to call it for about a five foot run-out.  Right now, they can fit six or seven jib-able features on the snow carpet and another ten off to the side, if you’re in the mood to switch the set up around.  Aside from the jibs, they have a jump with the equivalent hang-time of a 30 to 40 foot table, a real snow takeoff and a foam pit landing.  Geiger and White claim that everything they do for the Jibyard is in the name of progression and this jump they’re building definitely backs up that claim.  “You look at what kids are doing and what motocross has done with the ability to train within a controlled environment.  They wouldn’t be doing double back flips if there weren’t foam pits.” said Geiger, ”With skiing and snowboarding, the ability for a kid to come in here, and learn something new and land on his head for three solid hours before he gets it right and walk away—God knows what kids are going to be learning here.”  When deciding how to beautify the place, Geiger, White and the rest of the Jibyard crew went and cleaned junk out of the near-by fields.  “When I built the place, I wanted to have it aesthetically fit,” said Geiger.  In order to do that, they adorned the interior with random fencing, beat-up cars and a train car covered in graffiti.

They get their jibs from KAB Rails, based out of Salt Lake City.  If you’re unfamiliar with KAB, they’ve been building all sorts of rails, boxes, fun boxes and wall rides for nine of Utah’s ski resorts, the DC Mountain Lab, Mt. Hood and Camp Wendell’s for the past ten years.  They’ve also been involved with supplying a variety of jibs for events such as Park City Mountain Resort’s Intelligent Design contest last year, the Roxy Chicken Jam and the SLUG Games.  Aside from supplying the jibs, KAB also brought to life Geiger’s idea of using rollers as a drop-in rather than real snow or astro-turf.  The rollers are made of galvanized steel, which keeps a consistent speed while dropping in and helps to keep the rollers from rusting.  The last few rollers are rubber coated so you can dig your edges in as hard as you like on takeoff and not slip out.  Geiger claims that his roller system is “limitless and the best alternative to snow.” After a few hours of trying out his system, I wouldn’t disagree.

The place is already pretty sweet as is, but Geiger and White say they have huge plans for the future of the Jibyard.  The first improvement they have in mind is a pulley system, allowing a skier/snowboarder to move jibs around much more easily than dragging them from place to place.  “We got it set up right now where we have 15 rails, but it takes about five minutes for a kid to lift and place the new one in … with this new feature there’s going to be like 30 rails that can be switched out at the push of a button,” said Geiger.  Other improvements include “The Smed Room”, a lounge area dedicated to snowboarder Ryan Smedley who died in an avalanche up at Snow Basin three seasons ago. Geiger even mentioned plans to eventually build a hostel in the building next door to the Jibyard for traveling shredders.  “It’ll be like walking into an indoor trailer park where it’s like 40 trailers scattered throughout the building … any skier or snowboarder who’s in town who just wants to ski the Wasatch front for a few days, they have a place to kick it and be around others,” said Geiger.

“What [the Jibyard] represents and what it means to the culture is more important to Mike and me than anything else.”

As far as events and competitions go, every year the Jibyard holds a summer contest series. Visit theJibyard.com for more info on last year’s contest series.  They also have some plans for this winter.  “We’re gonna do an event with the jump and with Dew Tour this winter, it’s gonna be crazy.  We’re talking to them about having a nighttime event here,” said White.

To the common snowboarder/skier, the Jibyard is a rail park where one can go shred for a day, brush up on those tricky back-lips and pretzel-outs and just have fun doing what we love to do, but to White and Geiger, it’s much much more.  “What [the Jibyard] represents and what it means to the culture is more important to Mike and me than anything else,” said Geiger, “I really care about what the name means … I’ll be damned if I’m gonna let a Jibyard get built somewhere that doesn’t do certain things and doesn’t treat the kids right and doesn’t really do it the way it’s supposed to be done.  What the Jibyard represents to the culture is more important to me than anything.”

A few things to remember when planning your next Jibyard expedition:  For those of you who are worried about the long drive out to Ogden, the Frontrunner train drops you off merely a block away from the Jibyard.  Rock a t-shirt and basketball shorts when you go, and be sure to bring your helmet along with you (I know you all have one), because you can’t jib the yard without one.  The last thing you’ll need is to either download the waiver off their website or fill one out when you get there.  Just like most legal contracts, if you’re under 18 you’ll need a parent and/or guardian to sign the waiver for you.  Once you’ve got those things down, just make sure to show up stoked and ready to shred. Initially I was skeptical of the Jibyard, but after the first few drops, my skepticism quickly turned to the pure enjoyment that’s so easily obtained from snowboarding.  I found myself rushing to un-strap and get set up for my next hit for hours on end.