On Saturday, March 10, Park City Mountain Resort played host to Shred the Park After Dark, the second and final contest of the SLUG Games series. With the sun shining bright, deep into the late afternoon, the snow kids turned up in droves to compete for bragging rights. With nearly 50 competitors, the table was set for another installment of SLUG-style madness.

The SLUG Games: Shred the Park After Dark 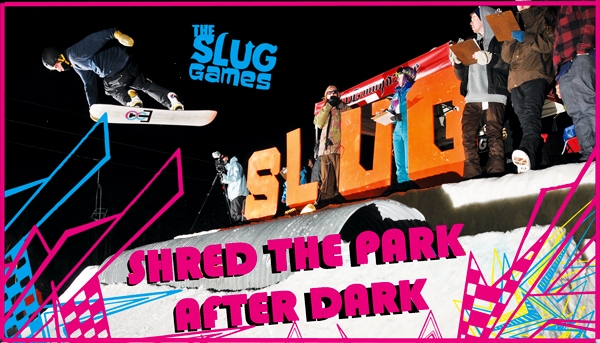 It’s pretty safe to say that this snow season has been a little disappointing. Luckily, we’re in Utah and not anywhere on the East Coast, because even a below-average snow count still allows for fairly ridiculous base depths. Combine that with sunny skies and spring-like weather and you have the perfect conditions for park laps. Add in the state’s finest terrain parks and you’ve got the ultimate training grounds. Mix in some local sponsors and a kick-ass magazine and you’ve got the last stop on the 12th annual amateur contest series of the season, SLUG Games, presented by Scion.

On Saturday, March 10, Park City Mountain Resort played host to Shred the Park After Dark, the second and final contest of the SLUG Games series. With the sun shining bright, deep into the late afternoon, the snow kids (some young, some grown) turned up in droves to compete for bragging rights. With nearly 50 competitors, the table was set for another installment of SLUG-style madness. The course, designed by the SLUG Games coordinators and built by Jeremy Cooper, consisted of three different rail options. On skiers’ right was a round flat-up-flat bar, centered was a short high bar to stair set, and skiers’ left provided a few more choices with a closeout flat bar and a gap to down bar option. All the top rails funneled into a wide quarterpipe with a corrugated coping expanding nearly the entire length of the feature.  Corralled atop the quarter behind the SLUG letters stood the MCs, Trevor Hennings and Nick Adams, and the judges. DJ Goobers provided the beats as the competitors stormed the course to get in some valuable practice hits.

The temps began to lower and turn the spring soup into snice (1/2 snow, 1/2 ice) pellets. After completing the short hike to the top of lower 3 Kings Terrain Park, the amateurs were off. Due to the amount of registered entrants and time constraints, 15-plus ams on single and double planks dropped, slid and raced back to the top of the course. Bonks, noseslides, blunts, firecrackers, fast plants, 270 on, 270 off highlighted the makes of the 20-minute session. The corrugated quarter came to serve as a point of interest as competitors tried aerials to appease the judges. With not a lot of vert, many riders found themselves falling victim to “the pit”:  the two-foot wide crevasse that separated the competitors from the judges/DJ platform.  The first casualty was Tyler Clark. As he attempted to stomp a back flip, wildcat-style on the quarter, Clark under rotated and drifted off the lip, clipped his nose and dented the corrugate. Clark hung out of the pit like a lawn dart, prompting the crew to fish him out. After the time expired, the judges deliberated and the top five skiers and snowboarders were inked for the amateur finals.

It wasn’t until the older gents and ladies took to the course that the natural light was replaced by the sparkling glow of oversized halogen bulbs. Now aptly titled, the rest of the competitors began to lay down their top tricks in hopes of a spot in the Open finals. Whoever said that the older you get the more conservative you become obviously is not a competitive athlete. The growing mass of fans and supporters watched in awe as skiers spun in and out, over and onto every feature in sight. The snowboarders utilized the rail to stair set with 180 and 360 gap outs. Even the ladies tossed bangers, including front boards and lip slides on the long down rail. As the level of riding rose and the clock ticked, it was all or nothing for a few riders. Fortunately for us (not so much for them), we were rewarded with some brutal slams. Luckily, everyone made it out slightly unscathed and allowed our guilt to subside as the young guns made their way back up for the first final heat of the night.

The finals operated in the same capacity as the prelims, with skiers and boarders on course at the same time. This ultimately got the best of some competitors as collisions and snakes became abundant. Over the next 40 minutes I watched as the top skiers and riders gave it their all in order to take home the goods. In the end, only the top three from each division could claim victory and the bounty of booty that awaited them on the podium. Taking the top spots in the Snowboarding Am Division were Justin Aday, Cody Hyman and Jayden Naylor. Sporting the ugliest pants of the night, Aday impressed with Miller Flips over the closeout and 270 bluntslides. Ski Am went to Ayden Damitio who landed two different 360 offs on two different features. Christian Santini and James Saarela completed the podium. Men’s Open Snowboarding went to Connor Gysin with Garrett Warnick in second and Tyler Blackburn in third.  Trevor Jackson took the Ski Open Division followed by Scott Nelson and Matt Hefferman. Although not a lot of women competed, those who did amazed everyone. Lynn Neil took home first place in the Women’s Open Snowboarding barely beating out Jamie Hill. Catherine Warchal stood atop the Ski Division alongside Jamie Crane-Mauzy.

Thanks to everyone who competed and supported the contest. Thanks to ski judges Dan Samond, Willie Nelson and Kimmy Sharp. Thanks to the snow judges, Steve Downs, Spencer Swalberg and Lena Nance. Thanks to presenting sponsor, Scion and all the other sponsors, RampSports, City Weekly, War Regime, DaleBoot, Neve Outerwear, Giro, Blindside, Discrete, Salty Peaks, Saga, Milosport, The Garage, Bar Named Sue, Jackalope Lounge, Wasatch Beers and Whiskey Militia. For a full list of results see below.