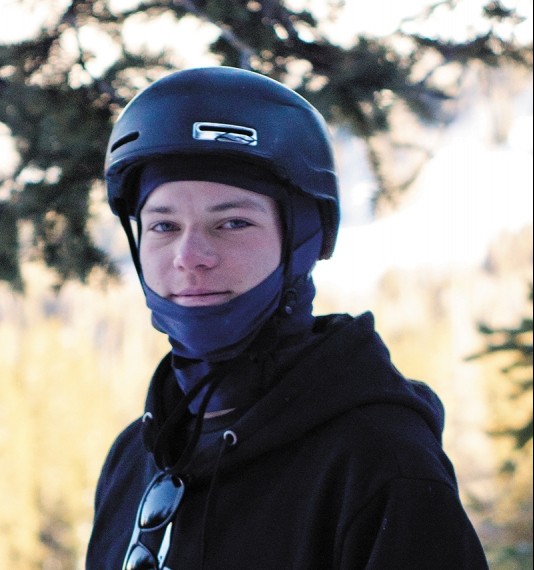 The name Walter Shearon is one that is recognized here at SLUG and in the up-and-coming ski community alike. Shearon, who is no stranger to the podium, recently snagged 2nd Place at SLUG Games: Battle at Basin Presented by Ken Garff Fiat and has been on a killing spree for the last couple seasons. After getting a taste of his passion at the ripe age of 3, young Shearon is no stranger to these mountains and the potential they hold. Now 17, the really crazy and almost scary, thing about Shearon is how smart and well-spoken he is, and how much drive and desire he possesses to learn more. “I’ve been told I have a technical and clean style,” Shearon says. Technical is one way to put it—scientists call it ambidextrous, and I believe skier bros refer to it as “stee.” Whatever it is, Shearon’s not only got it, he has pretty much coined it. Left side, right side and blind 270s in and out of rails are some of his stronger points, but the video footage of his corked 900 on the Brighton jump line last year is no joke. “Not too bad,” Shearon says, “for not being that good at jumps.” As you can see, Shearon is not only smart, but quite modest as well.

Sitting and chatting with a kid like Shearon is refreshing. The last thing the world needs more of are shit-head teenagers to exploit on MTV “reality” shows. Shearon, however, had the influence of his family to get him on the hill and some friends to spark his interest in the technical-trickery side of skiing. He says, “Right around the winter of fourth grade, I saw my friend Sam Collier’s older brother [Willem Collier] hitting some rails in his back yard, and I knew I had to try that. The next winter, I got a pass, charged at a box, slipped out and fell right on my ass.” A couple falls did not slow Shearon down, though, who currently rides for Surface Skis and Brighton Resort. “I met the Surface guys when I was about 12 or 13 at a competition at Brighton. It was the 801 versus 435 competition, which were basically the Salt Lake kids versus the Park City kids. I did pretty well, and those guys were hyped on me, so I’ve been getting skis and a pass for about four years now.” Currently, Shearon keeps his tips up on the Surface Auburn ski for those blue-bird park days and the Surface Outsider for those deep-pow days that we all dream of. What makes the great days even better is having a crew, of course. Shearon’s crew consists of longtime friends PJ Baymiller, Trevor Akimoto and basically whomever he can find at Brighton on any given day.

As far as influences go, Shearon recalls Tom Wallisch’s Super Unknown video at the start of his run for Level 1. “It sounds generic, but that’s just what I was into at the time,” he says. Regarding local guys, he mentions that “there are too many! Guys like Ian Wade and the Surface dudes are right up there. Khai Krepela is one of the sickest dudes out right now. I watch his part and just want to ski rails,” Shearon says. “Music is also a huge influence—anything from The Beatles to when Tupac died. Skiing, for whatever reason, just looks really good to rap music.”

Shearon’s style is a hard one to put a finger on. “I’m a park skier until it snows,” he says. “I love the pow days and park days just as much, but right now, I’m anxious for some fresh snow.” When snow is not on the ground, Shearon enjoys the mountains by mountain biking or scaling crags when climbing season is in full force. He also gets up to Mt. Hood for Surface Week. A dedicated student, Shearon currently studies at an engineering- and science-focused school and plans to attend the University of Utah this fall as well as acquire his EMT certification this summer. As far as personal progression, Shearon is looking to take his skiing to the streets. He says, “I’d like to get into the urban scene more and get on some handrails or set up some fun wall-rides. That’s where I see the most progression taking place. I’m also trying to get my big mountain skiing dialed in as much as possible.”

Shearon’s future is looking bright right now, with some big things in the works. Shooting photos with Andrew Kooyman up at Brighton and getting some new video footage up is on his to-do list, as well as getting out and exploring some new mountains. “I’d really like to make it up to Jackson Hole and eventually get to Rails 2 Riches in Killington, Vermont. That has definitely been a long term goal of mine.” In the meantime, you can check out some old footage on Shearon’s Vimeo account and some edits on NewSchoolers.com. You can also stalk him on Instagram @waltershearon. Shearon would like to thank his family for getting him into skiing, Brent and Kanako Baymiller for helping him and PJ shred as much as possible, Kooyman, Surface Skis, Brighton Resort and all of the other people who are pushing the sport and allowing guys like Shearon to progress and have as much fun as possible.