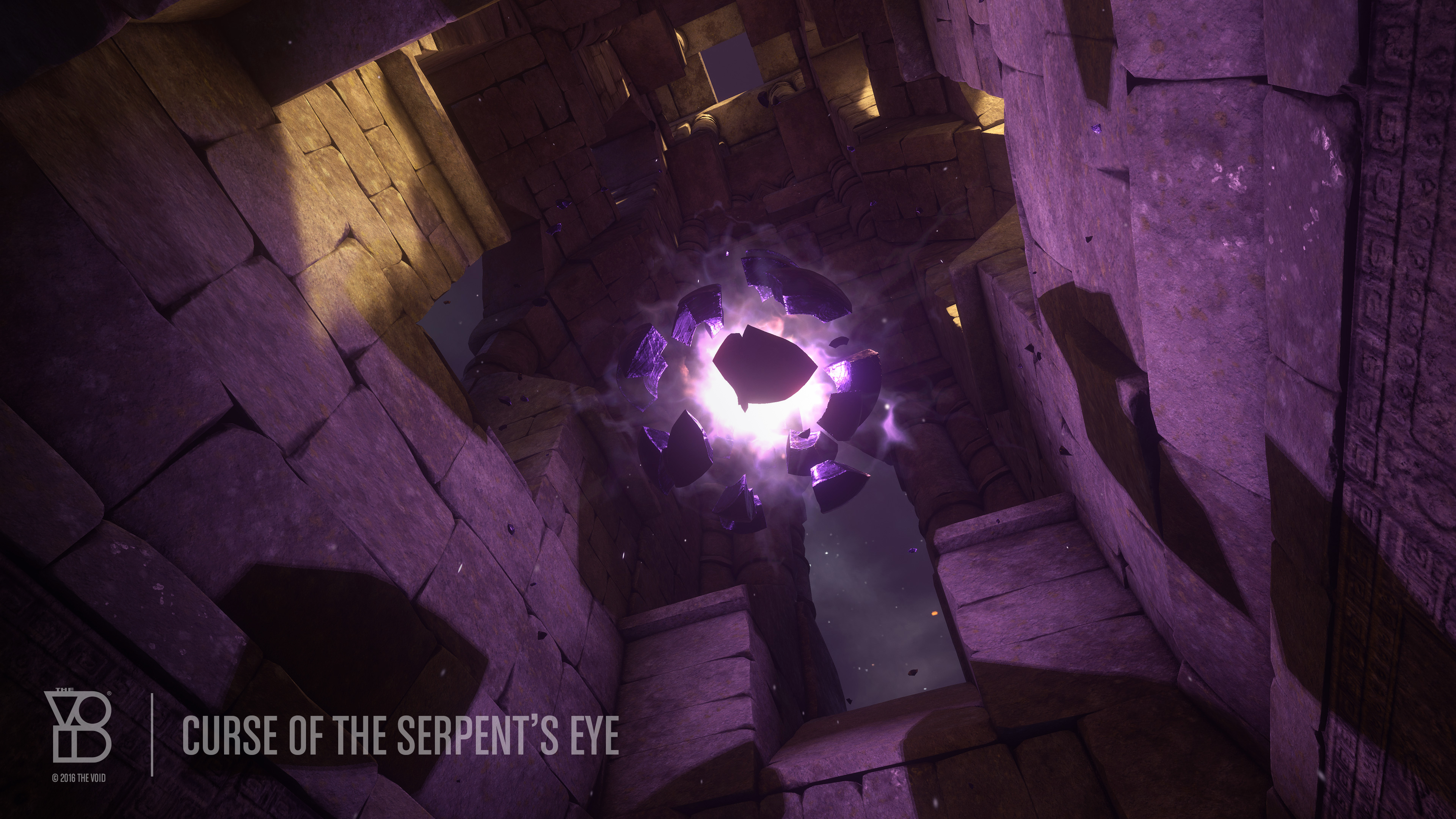 Image Courtesy of THE VOID.

Stepping Into THE VOID

I’m watching fireflies and thinking to myself that I don’t spend enough time doing this. They bounce back and forth, seemingly off of each other, and I lean my hand against the ancient ruin I happen to be standing in. The detail of the night and the surrounding jungle causes my knees to buckle as I lean out, trying to see what else is out there. The line between myself and my world has undergone a serious virtual makeover. I stare down through my visor at my cosmic blue hands, confirming my suspicions: I have nice-looking virtual hands. I’m looking for the glowing orb that I have to press to explore a new area of this world. When I press the orb, the whole room starts to shake, and I feel spiders crawling all over me. The environment reacts to my touch, and the orb disappears into the floor. I grab a nearby torch and take the next few steps down a corridor. I hear snakes, animals and the gradual tick of insects all around me. The shadows dart through the room while I wave my torch through the air and look up to see that the virtual fireflies haven’t abandoned me. This whole environment feels wonderfully new and different—like it’s filling up THE VOID between me and my imagination.

The Vision of Infinite Dimensions, or THE VOID, is the world’s first complete virtual experience. So complete, it goes a step further into hyperreality, which kind of feels like me plus the Iron Man suit and a huge world to get lost in. The demo I experienced was called Curse of the Serpent’s Eye, and for the six minutes (that felt more like 15, due to the exaggerated perception of time in the virtual world), I got to be Chunk from The Goonies, armed with wit and truffle shuffles, all the while in search of conflict-free Baby Ruths. The experience felt personal, artistic and beautiful. With so much art that leaves me as a spectator, it felt pretty amazing to be a part of the experience. Imagine staring at a glorious painting and then having that painting reach out, grab your hand and start walking along next to you.

Physically walking into THE VOID‘s virtual reality experience, I had no idea how big this project was. Stepping into THE VOID’s studio felt like stepping onto a movie set—a set that’s only further enhanced by the power of virtual reality. This wasn’t an arcade- nor laser tag–like setting—this was moving platforms, secret hatches, magic-like effects and suits you put on that look like armor from the Halo series—THE VOID is the 65,000 square-foot, indoor Tomorrowland section of Disney World—with the whole rest of the amusement park still to come. There will be a recreational park aspect about THE VOID, linking the experiences together with augmented reality (think Pokémon) woven throughout the attractions. California’s restaurant chain, the appropriately titled OneUP, will supply food and a free retro arcade. At the entrance, there will be a retail store/museum clueing you in to what’s ahead. There will be modern arcades plus a VOID-themed boutique hotel. However, the project I’m most excited for is the Evermore Gardens experience (non-virtual) set to the idea of Hamlet, with a village from the days of yore.

I got a tour of the studio from one of THE VOID’s founders and current CEO, Ken Bretschneider. “We want to offer people a break from their lives,” says Bretschneider, “give them an experience that takes them away from everything around them and shows them worlds like they’ve only imagined. We want to bring cutting-edge technology and captivating experiences all under one roof.” Utah is just the start. As an international company, THE VOID is setting up their base camp here in Utah, but has plans for global domination.

Part of the magic around THE VOID and its vision are the artistic roots that sit underneath its foundations. Bretschneider’s passion is evident in every nook and cranny in the studio. While we were looking through some concept art, he explained all of the fantastic details that play into creating a virtual reality, from languages to plant life that exist in this world and beyond. Bretschneider explained that there are only two rules you have to follow while working at THE VOID: “You have to be super talented, and you can’t be a dick.” That’s it. That’s THE VOID’s secret to success—plus a few gizmos.

I asked Bretschneider about what we could expect in the future as far as experiences go, and he said, “Everything”—a complete variety from your R-rated horror experiences to Alice in Wonderland–like open worlds. THE VOID has an app that will allow you to build your own avatar to use while visiting, and you’ll have the ability to develop your character even when you’re not there. You’ll gain XP, and each visit will award you with additional opportunities that weren’t there before: new levels, new episodes, new entire worlds to explore with friends and family.

As a representative from the geekiest state in the union, I have to say that I’m excited. Utah happily welcomes THE VOID and all that’s to come into our nerdy nook of the country.