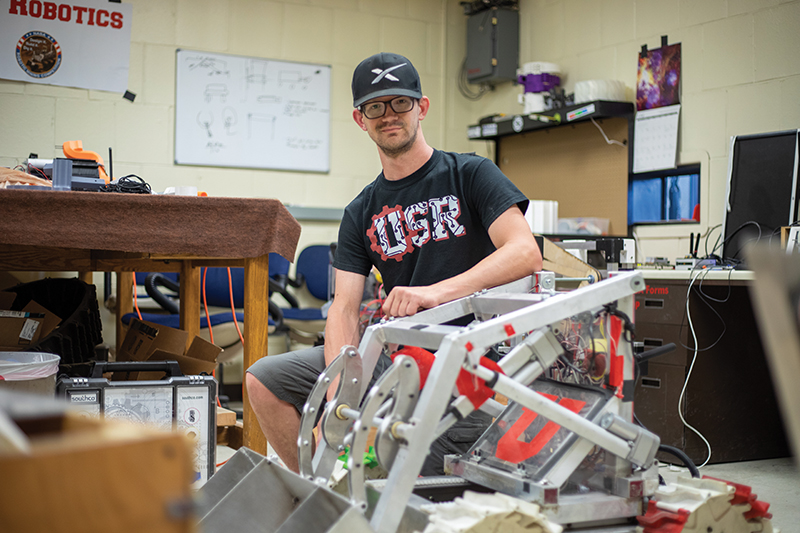 For the last five years, the Utah Student Robotics Team (@utahstudentrobotics) has been completely in charge of conceptualizing and manufacturing space mining robots to compete annually against other colleges from around the country at NASA’s Kennedy Space Center.

Reverting from building robots to mine on Mars, “We are mining mostly for water now,” says David Purcell, former student and President of Utah Student Robotics. The robotics team is technically part of the School of Mechanical Engineering. However, to be part of the team, all you need is a desire to participate.

“We actually really appreciate working with students from all majors that are not science, math or engineering-based. For instance, liberal arts majors tend to help us with social media and marketing, and finance majors help us with the accounting.”

Simply put, Utah Student Robotics team is a group of students who build mining bots to be sent to Mars and the moon. The robots are designed to dig through a material called regolith (aka space dirt) to get to frozen water. “The lighter the rover, the more points you get when competing,” says Purcell. Because it costs about $10,000 per pound to launch anything into space, the team had to come up with cost-effective manufacturing strategies. “It just made sense to use 3D printing, because not only is the material light and relatively cheap, [but] none of the students are master carpenters.” From the tires to the mainframe, anywhere on the robot that is red, white, green or black has been made on a 3D printer.

With this type of innovation happening right in our backyard, it’s no surprise that the Utah Students Robotics team will be a returning Google Fiber STEM participant at this year’s DIY Festival. “Being a STEM participant at the DIY Festival allows us to showcase our bots and educate people on the exciting things we’re doing in space,” says Purcell. So, if you find your way into the STEM Building at the festival, check out the student Robotics Team. If you’re lucky, they just might let you drive one of their robots! –Lauren Ashley