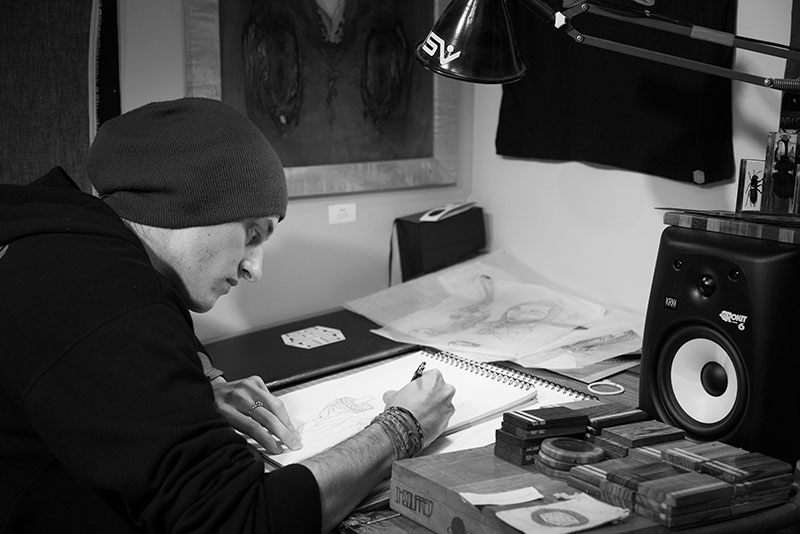 The Mysterious Design of Life and Death: A Profile of Isaac Hastings

Isaac Hastings creates cryptic, carefully designed, line-dominant artwork that conveys both spiritually infused and dream-inspired symbols. His meticulous design is featured on the cover of SLUG this month to honor the magazine’s 300th issue. A self-described “jack of all trades, master of none,” Hastings is humble—he sports a black hoodie, jeans and a beanie during our interview and speaks frankly about his evolution as an artist. Born in Salt Lake and raised in Sugar House, Hastings is based in this mountain-framed city and uses its unique geography, proximity to wilderness and local artistic talent as inspiration.

Hastings labels himself as an illustrator for now, but doesn’t seem too concerned with the title. “If you would have asked me [my title] a year ago,” he says, “I would have said I was a painter or a woodworker, so I have lots of different hats …” Hastings’ earliest memories include drawing, and his talent has been refined over many years. His parents introduced him as a child to the creative process in their family-owned woodshop, and his siblings—many of them craftsmen—exposed him to the metamorphosis of raw materials into finished product.
Hastings’ talent was further nurtured through a supportive art teacher at Highland High School, from where he graduated in 2007, and his schooling subsequently continued with a few basic art classes at SLCC. “I just took a figure drawing class to kind of get my feet wet—test the waters for school,” he says. The illustration degree Hastings is most inclined to pursue would do little to further his career, he believes. Even though he thinks the education could be valuable, he has decided to forgo a diploma and learn his craft through the study of other artists.
Opting out of a formal education has allowed Hastings more latitude to explore the art world. He has tried his hand at painting, design, illustration, video and woodwork, among other mediums. However, this diversity of materials can, he admits, slow progress occasionally. “Sometimes, if I’m, say, making a video or something, and it doesn’t feel like I’m progressing as fast as I want to, it’s because I’m trying to do everything all at once,” he says. Still, he values the freedom to try his hand at different modes of creation.
In addition to exploring media, Hastings has investigated local artists like Trent Call and Sri Whipple. Whipple’s twisted and bulging anthropomorphic forms create depth absent in Hastings’ work, but the wild, dominant lines and bright colors forge a relationship between the two artists. Likewise, Call’s illustrations—often colorful and carefully designed—carry similarities to the younger artist’s pieces.
Much of Hastings’ boldly colored work has a deeply spiritual resonance. It can look a bit like Indian religious iconography in its careful, intricate symmetry, and can seem demonic when showcasing meditative monsters floating on top of crisscrossing, geometric patterns. Layered shapes and sinister animals are often defined by swerving topographic lines. His creations, regardless of medium, often convey the slickness and brushless perfection of digital illustration. The life-death cycle, Hastings says, is the recurring theme of his work. His style demonstrates the human compulsion for control, a compulsion that often contradicts the unpredictable, intertwined reality of life and death. He frequently uses images of predatory animals, emphasizing teeth to represent destruction and hands to symbolize creation. Furthermore, birds are a recurring motif—“A bird is really interesting because, if you ask anybody ‘What would you be if you were an animal?’ like, 90 percent of the time, people say ‘bird’ because it’s free,” he says. An image of a dead bird, therefore, carries a great deal of power in its expression of loss.