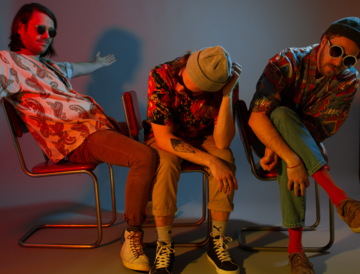 Hailing from Provo Utah, Desert Noises has been touring extensively throughout the years playing major festivals and venues of all sizes. After a brief hiatus, the band is back on the road, in the studio, and ecstatic to continue their journey that started over a decade ago. This extended break led the band into individual artist projects and tours with other groups such as Cage the Elephant, RayLand Baxter, Liz Cooper & the Stampede, Wild Child, Harpooner, Dove & the Wolf, and Microwave Mountain.

In August 2020 the band released a new full-length album that they recorded in their relocated home of Nashville, TN with Bill Reynolds (Band of Horses). It’s a new and yet familiar sound, echoing the spatial landscapes of ‘Mountain Sea’ and the visceral growl in ‘27 Ways’ but with obvious tales of change and growth from singer-songwriter Kyle Henderson. Then in April 2021 the band dropped a four song EP, “The Rainbow Lake Sessions”, featuring tracks they recorded in a cabin in south western Tennessee. During which time they wrote and recorded a song a day, a fresh and exciting process for them. And with that, there’s no telling how high this mountain is that they are climbing, but for three friends from the desert, climbing is what makes them feel at home.