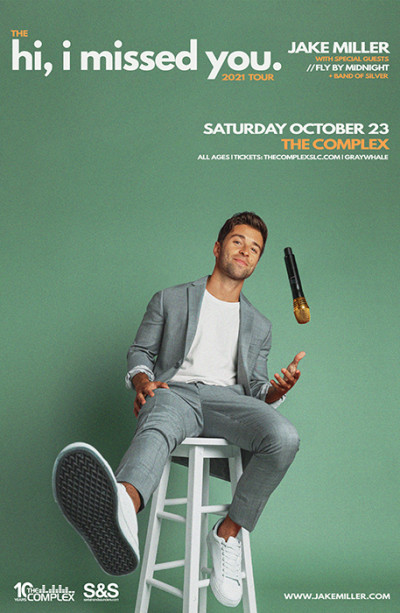 There are no event-specific COVID-19 requirements for this event. Please read through these before attending: https://www.thecomplexslc.com/COVID-19.php

with
Fly By Midnight
Band of Silver

With a style influenced as much by John Mayer as Macklemore, singer Jake Miller emerged while still a student at the University of Miami. Miller got his start in high school, posting videos online from his Weston, FL home. In 2011, he self-released his debut EP, Summer Session, and performed his first live gig, opening for Snoop Dogg, and from there he released an EP per year. His second EP, Spotlight, arrived in 2012. He signed a deal with E1 Music in 2013 & released the Road Less Traveled EP & his debut LP, Us Against Them. Miller unveiled Dazed and Confused in 2014 with features from Nikki Flores & Travie McCoy. The feel-good party EP Rumors released 2015. In 2016 he released the Overnight EP, which he took on tour opening for Fifth Harmony. In 2017, the singer self-released his sophomore LP, 2:00am in LA, after parting ways with Warner Bros. Less than a year later, Miller issued his third full-length, Silver Lining.His 2018 release with RED MUSIC “Wait For You” is a bonafide smash. Produced exclusively by Miller, the track’s growing success is a testament to his fearless approach to songwriting & his ability to push his own boundaries in the studio. Matched with his signature brand of pop, Jake uses heavier electronic influences on “Wait For You,” while the lyrics tackle the complexity of relationships. “Wait For You is a song written about a situation someone I know was going through,” Jake explained. “It’s all about the right person, wrong time.”