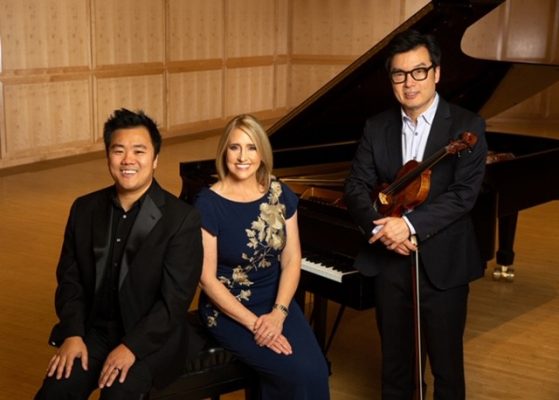 David Park, award-winning violinist, has performed around the world playing the ‘Big Five’ violin concertos and the complete Bach Sonatas and Partitas. Recently, he has performed Beethoven, Mendelssohn, and Paganini concertos; and Bach Partita and Bartok Solo Sonata for live radio. Park has also played solo for a soundtrack and starred in a Sundance movie. Park is a member and faculty of Utah Symphony and University of Utah, respectively. He also serves as the Cultural Ambassador of Ferrari.

Representative Melissa Garff Ballard, a politician, arts advocate, and concert pianist, has a degree in piano and also was a faculty at University of Utah. Rep Garff Ballard is a founding chair of the advisory board and recipient of the Camerata Award for excellence in arts support. Her first album with Park and Marshall will be released this summer.

Alex Marshall, hailed as ‘a rare talent’ has a BM in piano and BS in Biomedical Engineering. Marshall is the Music Director of Theater at University of Utah, and plays with premier musical institutions such as Utah Symphony.