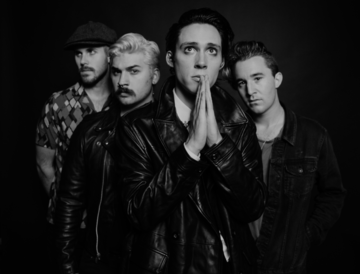 The Weathers event scheduled for March 7, 2021 has been rescheduled. The new date for this event is October 17, 2021.

Your original ticket will be honored at the rescheduled date.

If you cannot attend the rescheduled event, please email support@24tix.com. Refund requests will be accepted through February 27, 2021.

A Weathers song is like a movie.  When the band’s co-lyricists Cameron Boyer and Cameron Olsen talk about their lives, they liken them to “a John Hughes Film.”  “I get a picture in my head of the story I want to tell,” explains Boyer, a truly multi-disciplinary artist who has been making films as long as he has been making music.

Vocalist Cameron Boyer, guitarist Cameron Olsen, bassist Brennen Bates, and drummer Cole Carson create finely crafted, introspective pop songs heavily inspired by the alternative culture of the 80s, 90s and 00s.   Some of Boyer’s earliest musical memories are of listening to The Beach Boys’ Pet Sounds with his dad and Hot Fuss by the Killers, while Olsen was raised on a steady diet of Depeche Mode, Cheap Trick, Bryan Adams, and Guns ’N Roses.

The beach haven in which they grew up – just outside Los Angeles – would hint at a ‘chill’ environment where surf and sand soothe the soul.   That was not the case for Boyer, whose internal tumult growing up was compounded by social anxiety and depression that has given his music a preternatural gravitas.  Teen angst has been a driving force in the creation of some of the most beloved music of our time and, though you would think the generational divide would deepen as technology and tastes evolve, Weathers are proof that the proverbial ‘song’ remains the same. The band’s songs speak to those among us who are struggling to keep it together day-by-day.  They remind us that nobody has it easy and that we are not alone.

The band came together in 2015, largely through social media.  Boyer and Bates met through a Facebook message responding to a post searching for a bassist.  Carson auditioned through videos on YouTube, after an intro from Boyer’s father, who had played in a band with his dad when they were in High School.  Olsen came aboard through a local battle of the bands.

RCA records debuted the first Weathers music in 2016, including the song  “Happy Pills”, which was the most added song on alternative radio on its impact date, receiving the most adds for a new artist in the 2010s and peaking at No. 21 on the Billboard Alternative Songs chart. To date “Happy Pills” has been streamed more than sixty million times. Following the success of “Happy Pills”, the band released the 2018 album Kids in the Night, for which they co-wrote and worked with a who’s who of the newest generation of prominent producers and songwriters including Tim Pagnotta (Walk The Moon, Neon Trees), Kyle Moorman (P!nk, Andy Grammar, Elle King) and Drew Pearson (Switchfoot, Ke$ha), to name a few.

In 2019 the band released a string of singles written and co-produced with many of the same collaborators.  These songs brim with bright melodies, insistent hooks, and potent rhythmic energy.  The material felt custom-made to be sung at the top of your lungs while barreling down the highway.  “I think we wanted to let loose and not hold ourselves to any harsh guidelines,” says Boyer.   “When the band first started out, we were really strict. Every song had to be dark. Anything that felt a little happy was kind of a no-no. We let all of that go. We wanted the music to be fun and energetic.

“We used to write stuff like, ‘Shit sucks and we’re sad about it,’” Boyer says. “Now we’re like, ‘Shit sucks and we’re okay with that.’ It’s very empowering.” The band advocates for mental health and if prompted will often bring to the table the topic of seeking help and the desire to get better. As Boyer says “It’s okay to not be okay, but it’s never ok to not get help.”  To that end, the band’s social media is filled with options for fans to improve their existence.  Partnerships with mental health organizations are soon to be announced.

In support of their recent releases, Weathers have been on the road supporting bands such as Cage the Elephant, Jimmy Eat World, Dreamers, Palaye Royale, Badflower, Echosmith and Catfish & The Bottlemen, and playing festivals like Lollapalooza and Firefly. They are currently working on finishing an album due out sometime in 2021 and preparing for their first national headline tour.