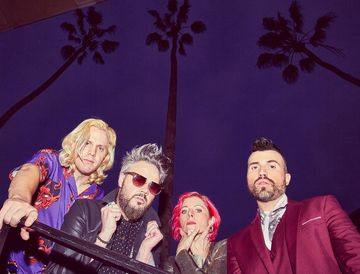 New beginnings present themselves at just the right moment.

A confluence of personal and shared experiences awakened Neon Trees in 2019. Following four years out of the spotlight, the multiplatinum genre-busting alternative quartet—Tyler Glenn , Chris Allen , Elaine Bradley and Branden Campbell , —reignited the spark. The musicians summoned the same rock spirit, pop universality, and disco ball-drenched grooves that millions of fans fell in love with, while infusing a lot of wisdom and a little more wit earned along the way.

“As proud, excited, and grateful as I am for our first decade, I’m so eager to draw a line in the sand,” exclaims Tyler. “The initial era was meaningful and captured one period of time, but our new music is so much more reflective of the person I am. I don’t feel any chains at all. It almost feels like our first record again. We had no pressure. Honestly, it all never really stopped. We just turned the lights off in a public way. We’re turning them back on now. It’s not just another chapter; it’s the start of a new erafor Neon Trees.”

The first chapter introduced a sizzling signature sound cast in synth soul and rooted in robust guitars. The group began a rapid ascent to the forefront of popular culture fueled by 2010’s Habits. Its lead single “Animal” scored a double-platinum certification from the RIAA and took home “Top Alternative Song”at the Billboard Music Awards. In 2012, Picture Showspawned the quadruple-platinum “Everybody Talks,” which soared to #6 on the BillboardHot 100. 2014 saw Pop Psychologybow at #1 on the BillboardTop Rock Albums Chart and #6 on the Top 200 in addition to producing the gold hit, “Sleeping With A Friend.” Along the way, the quartet garnered acclaim from Rolling Stone, Entertainment Weekly, USA Today, and performing countless sold- out headline gigs. After a successful 2015 headliner, Neon Trees took a well-deserved break. As Chris, Branden, and Elaine took time out with their respective families, Tyler released a solo offering entitled Excommunicationand made his Broadway debut in Kinky Bootsduring 2018. Around the same time, a rush of inspiration overtook the front man.

“I never felt finished with the band creatively,” he admits. “My bandmates were building families. Life was happening. The Broadway show came at the perfect moment, because we were ready to go full speed ahead. The show took me out of my comfort zone in an amazing way and gave me my groove back. I missed playing with everyone. I took all of the momentum and confidence from the show, went right to L.A., and got to work on Neon Trees. The time and space to do other things rejuvenated why we continue to do this. It just feels like the band I started in my early twenties with my friends.”

This feeling courses through the single “Used To Like.” Touched by a glimmer of keyboards, sunny guitars and a danceable beat swing towards the buoyant, bright, and bold chant, “Let’s go to extremes…get back to what you used to like about me.”

“At the end of my last relationship, the song was my last sort of plea,” he elaborates. “Let’s bring it back to that bliss period when everything was right. I hear a lot of joy, but I hear a lot of sadness. We’ve always compared dark lyrics to anthemic music though. I ended this codependent relationship last year and was able to write what happened after and break away from the negative things. The song got us going.”

Signed to a new deal and readying their long-awaited fourth album for a 2020 release, these four friends take full advantage of this new beginning together.

“I like that our single is called ‘Used to Like’,” Tyler leaves off. “We’ve been gone for a minute, so we’re reminding our fans of what they liked about us. There’s something very pure about Neon Trees right now. I hope listeners hear the sincerity. I also hope they have a f*cking time listening to us.”