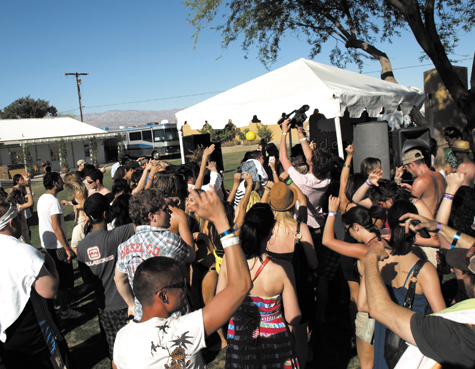 Photo by GetFamousLA.com for SLUG.

Indio California’s three-day festival, Coachella, has quickly become the most well-known music festival in the country. Because of its magnanimity, seemingly impossible line-ups have become the norm—groups that have completely dissipated reform for one-off performances or career relaunches.  For example—this year’s bill, we saw Paul McCartney, Throbbing Gristle, The Murder City Devils, and previous years have seen groups like Daft Punk, The Pixies, and Rage Against the Machine. All of these once-in-a-lifetime types of shows tend to draw not only regular festival goers, but also the jaded, the virgins, and those completely out of their element (I’m thinking you, people with babies). In part, because of these huge crowds (this year’s festival was the second largest ever), the mainstream continues to support a festival that also supports smaller acts on the brink of breaking through and exposes them to an entirely new crowd hell-bent on having an amazing time.

Set in the vast Empire Polo Fields, which are in turn, in the middle of a desert, Coachella is an event that requires a full commitment. The walk from the parking lot is no small trek—half-hour walk from even the closest of parking spots, another half-hour wait in the ticket line, and a fifteen-minute walk to the nearest stage—the size alone would hint that the festival has become impersonal, outgrown its roots and past its prime (i.e. Lollapalooza). This is, however, not the truth. The calliope of music fans certainly creates a clashing of the scenes, but the solidarity is undeniable—it might be the desert air, the unavoidable quest to get in, or the high ticket prices, but everyone is full-on committed to having the most fun humanly possible—and then some.  At any point you’ll find at least 100 or so passed out, drugged up randoms covered in body paint—staring at the arrangement of new age art installments—usually consisting of fire shows, hippies with glow sticks and pasties (which is way worse than it sounds), and a handful of genuinely impressive lighting installations.
In the realm of visual pleasures, you didn’t need to be fucked out of your mind (although it doesn’t hurt) to enjoy the stand-out performance from this year’s Coachella—Etienne de Crecy.  Crafting a progressive funk electro house  sound, Etienne de Crecy (also known as Superdiscount) has long been well-respected in the DJ community for exceptional remixes. The live show on the other hand is nothing short of spiritual—especially in the context of Coachella’s fun-or-bust crowd. In the spirit of Daft Punk’s pyramids of light from the ALIVE 2007 tour, de Crecy ‘s light show was a 3D progressive visual symphony that ended the festival’s dance tent in a 20-minute applause—which unfortunately was not enough for an encore.

Standing in a three-story cube, the show looked like Hollywood squares on ecstasy.  A series of projectors created a 3D illusion that grew in complexity as the music begin to build towards an anthemic electro-house climax.  It cannot be properly explained nor are the pictures that impressive, but check this video: youtube.com/watch?v=Jzil8S7tUeY

Although the Etienne de Crecy is the stand-out performance in my mind—it was not the most talked about event at the festival.  In addition, because of the ridiculously huge line-up of the festival, and simultaneous show times, it becomes impossible to see every group or describe the various sets.  After extensive analysis and survey, here are some of the most talked-about performances: Paul McCartney: Former Beatles’ guitarist performance was described by one fan as “fucking magical.”  Performing a wide range of material, most of which is largely forgettable, although the most memorable songs (i.e. Beatles songs) were worth the wait through the two-hour set.

Morrissey: Former Smiths frontman takes a favor for Karaoke these days, and also managed to forget some lyrics and storm off stage.

Jokers of the Scene: Canada’s DJ Duo brought their cutting-edge tracks and remixes to The Dome (Coachella’s dance … dome … duh). Encased in a giant metal jungle gym with sporadic projection panels, the circular stage built on subwoofers drew more fand than a dropped Altoid. This is definitely a group to watch in the next year—they have a solid sound and are sure to bring some new life into the unfortunately expiring bloghouse sound.

The Cure: Ah, Robert Smith. Seeing his face on a 25-foot megatron was a bit unsettling – as one fan put it, “He looks like Winona Judd on crack.” Although the looks may be out the window, the performance of classic songs was exceptional—everyone was mouthing the words and dancing like 13 year old girls at a Miley Cyrus show.

Murder City Devils: One of the many exciting reunions as of late, Murder City Devils have maintained a cult-like following despite having been broken up for 8 years. The reunion show did not disappoint, reinforcing the opinion that this band is the best project any of these members have, or ever will create.

No Age: Los Angeles’ next wave punks have emerged from the true underbelly of Los Angeles music scene to national prominence in a way that is surprising, yet well deserved. Never a compromise for originality or trends, No Age cannot be easily pigeonholed into any particular genre or sound, but their appearance at this year’s festival was fresh and original.

Girl Talk: Greg Gillis’ laptop-punishing performance is a genre-blind post-modern dance party—at this year’s dance tent, the performance was enhanced by costumes, crowd interaction and a few thousand manic fans dancing wildly to everything from Elton John to top 40 hip-hop and soul. Despite its size, not all of the fun is contained within the festival—in fact some of the most stand out events are the private parties that bring some of the greatest DJs, celebs and hipsteratti. Here’s a quick rundown of what was hot, and what kindaaa sucked:

Filter (Kindaaa sucked): Set around a pretty kick-ass venue, complete with a private pond and two separate dance stages, the music was only OK, with douchebaggery in full swing.  Driving up to the party, our crew was enjoying some totally sweet club hits. Driving away, New York power twins Greg and Darrin Bresnitz were also told to, “Get more glasses.”  I don’t even know what that means.  Nice try Filter, too bad all the suck had to shit on your sweet party setup. All that might have been ok—until they ran out of booze. Urb (Pretty Sweet): A few brave souls were still functioning by the end of the weekend to attend Urb’s little pool party jam at a small horse ranch just outside Indio. It was getting a bit hot, but the open bar, vegan coconut ice cream and dips in the pool kept the party rolling till early afternoon, with a surprise live performance of “Day and Nite,” some freestyles and a cover of Kanye’s “Harder, Better, Faster, Stronger” by Kid Cudi, everyone’s favorite hipster rapper.

Belvedere IX (Totalllly sucked): Sometimes, like at the Filter party mentioned above, you aren’t too sure about a party going into it, and so it at best turns out ok.  For the Belvedere IX party, I really and honestly wanted it to be awesome. Although walking up to the door and overhearing “That party is unbearable” wasn’t a good sign—neither was half the ed banger crew waiting outside for a cab. Although, with DJ sets from everyone’s favorite bangers Mehdi, Sebastian, and Kavinsky, the eds (sic) were sure to be banging. Instead, it made my ed hurt (sic—ed banger records … get it? So funny).  Just how did the Riviera Hotel totally fucking blow it? Well, cram these DJ’s into the most generic, undecorated Hotel Ballroom, rent a cheap-as-shit PA and an even cheaper sound guy—add some weird shitty drink selections, poor lighting (as in the lights were still on?!?), and just when you think it couldn’t get any worse, turn down the bass all the way and crank up that treble to ear-splitting levels. Anthem Ranch (ZOMG Awesome): Ever had that moment where you realize you are pretty much at the ridiculously right time and place? Enter the small yet wise Anthem Magazine. Situated on yet another ranch, the set up was absolutely over the top and perfection. Maybe it was the completely reckless 100-foot slip and slide into the private lake, complete with jetskis and paddleboats … it could have also been the simply amazing music provided by the likes of Aeroplane, Busy P, and Trouble & Bass crew. Or maybe Daft Punk’s Thomas Bangalter playing along to the music on a piano, oh and sure, everyone was there, Justice, Eric Wareheim, Paris Hilton, me. Adidas Party (Best. Party. Ever): Going to a party at Frank Sinatra’s house is generally a good look—but this exclusive after-party event sponsored by Adidas was absolutely amazing—ed banger totally redeemed themselves by ditching out on the Belvedere Party and providing the tunes, while Adidas sponsored a delightful open bar, food and quite an amazing group of guests. Even the architecture was pleasant. A party that pays attention to architecture pays attention to success. Well, there you have it. That pretty much wraps up the publishable events of Coachella 2009’s successes, debauchery and failures. This is only a sliver of the goings on—it would take a team of a dozen well-connected reporters to begin to cover it all—and all you have is me.  No matter the line-up, I can assure you future Coachella adventures will not be something easily regretted.

For more photos from Coachella, check out the SLUG site: slugmag.com.