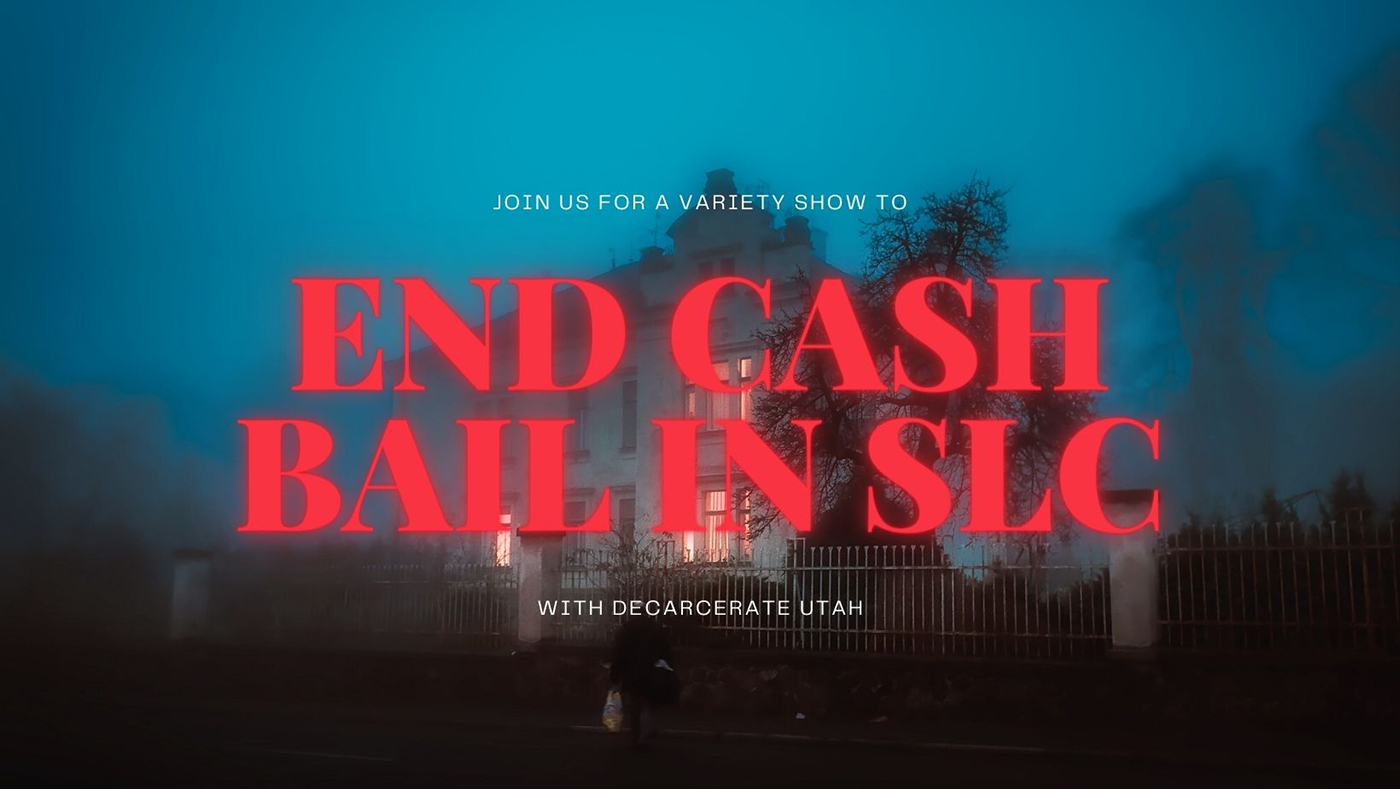 A Show For a Cause: Salt Lake Community Bail Fund hosts a Virtual Halloween Variety...

It’s the season of ghouls and ghosts, but there is nothing scarier than the prison industrial complex. As it stands today, Utah has a prison population of over 6,000, and one of the fastest growing rates in the country. Many of these individuals remain in jail, unconvicted and unable to pay their oftentimes outrageous bail, sometimes as high as $500,000. The Salt Lake Community Bail Fund (SLCBF) wants to abolish the cash-bail system, a predatory structure that further disenfranchises people in already marginalized demographics. In an effort to raise money for local bail funds, SLCBF is hosting a Virtual Halloween Variety Show this Saturday where they hope to raise $31,000. Brinley Froelich, Co-founder of Decarcerate Utah, speaks with SLUG on the birth of SLCBF, upcoming Halloween performances and more.

SLUG: When and why was the Salt Lake Community Bail Fund founded?

Brinley Froelich: The Salt Lake Community Bail Fund officially launched on Sept. 1 this year, but it was an idea since the early days of Decarcerate Utah when Eliza McKinney and I started it in 2017. We saw bail funds across the country, especially the Chicago Community Bond Fund, as abolitionist resources that met both an immediate material need by releasing people from pre-trial detention and exposing the harms that cash bail perpetuates. Due to our limited capacity and small organizational size, however, it was sort of put aside for a while as we focused more on educational work in Salt Lake. Even though it’s entered the mainstream now, when we first started, we didn’t really see many people in SLC explicitly organizing or talking about abolition, other than in smaller spaces or in more underground circles.

Early this summer, the Covid-19 Mutual Aid SLC group connected us to Lexie Wilson, who reached out to us wondering if we knew of any bail funds to donate to. This was before Utah Against Police Brutality had launched their GoFundMe after their May 30 protest. I just threw the idea out to her to see if she wanted to help us create one, and she was down!

From there, she pretty much spearheaded a whole subcommittee, and slowly we started to grow a volunteer base so that we could make this a reality. It took some time for us to launch because we wanted to make sure we had a foundation that would keep this bail fund running for as long as cash bail is still utilized. Finding a fiscal sponsor and creating process docs were intensely scrutinized so we could ensure this work is sustainable and shared. It’s important to all of us that this work is collaborative so we aren’t impacted by the effects of burnout or neglect, which can easily happen in the grassroots sphere.

SLUG: I know that Salt Lake Community Bail Fund is operated by Decarcerate Utah, can you expand more on how the two organizations complement one another?

Brinley Froelich: The word decarcerate implies its opposite, incarcerate, so our main principle is centered around releasing people from jail or prison and reducing [those facility] populations to zero. We are organized around principles of autonomy and self-governance, so we operate primarily through subcommittees, the SLCBF being one of them. We all agree to a set of points of unity, with our primary goal of abolishing the prison industrial complex. Since bail funds release people from pre-trial detention, it has a natural fit with our shared missions.

SLUG:  What are some of SLCBF’s mission and goals?

Brinley Froelich: The mission of the Salt Lake Community Bail Fund is twofold: 1) To minimize the incarcerated population of Utah jails by providing cash bail to those who cannot afford the posted amount. 2) To end all pre-trial detention in Utah, using the Community Bail Fund as a mechanism to expose the community harm caused by cash bail and unnecessary time spent in jail.

We’re hoping to offer more than just a cash payment, however. We’re also compiling a community resource guide, which can help people navigate the confusing conglomeration of non-profits and other organizations that provide a variety of needs to varying degrees, as well as offering court support to defendants we bail out to let them know that the community has their back.

SLUG: A variety show is such a unique charity event. What inspired Salt Lake Community Bail Fund to put this whole thing together?

Brinley Froelich: We wanted to do something fun and social for a fundraiser, while still being safe during the pandemic, and the idea of a variety show kind of organically grew out of the collective networks of friends and supporters of Decarcerate Utah—as well as some of the organizers! When we were thinking about how to combine drag performances with bands and comedians, we knew a variety show was going to be a natural fit for a Halloween night.

SLUG: How will the money raised be used to support SLCBF’s cause? Is there a specific process of choosing which bail funds the organization contributes to?

Brinley Froelich: All of the money we raise is reserved specifically to pay a person’s bail. Since we have a separate fund for Decarcerate Utah, we’re able to use that to cover most of our operational costs, allowing us to use the fiscal sponsorship to relieve us of the tax burden of the high amounts of what it takes to operate a bail fund.

Right now, we’ve had to say no to a lot of bail requests simply because the amount was more than we’ve been able to fundraise so far. Our first request that came in was for $60,000, another we had was for $500,000! We think it’s atrocious that these people are being held under such a high cost, and wish we could fill in this gap, but until we eliminate the cash bail system (or raise money into the millions), we’re simply limited on who we can actually bail out.

That said, when we can afford bail, we’re prioritizing giving funds to people who are most marginalized, including people of color, people with disabliities, or people who are transgender, gender non-conforming, or LGBTQI+. Since the funds operated by Utah Against Police Brutality and DSMNTL are focused on protestors, we are focusing on other people in our community who cannot afford to pay bail.

SLUG: Zoom performances and concerts have become so popular during the pandemic, what does SLCBF hope to accomplish apart from raising money for bail funds?

Brinley Froelich: Raising funds for bail is nice and an important part of community care, but we also really wanted people to have something fun to look forward to on Halloween! It was also important to us to host an event that won’t put more people at risk of spreading COVID by going to parties or gathering in a large group. We’re all really sad that we can’t participate in things like we have in the past, like Punk Rock Halloween, so we wanted to see if we could make a festival-like spirit in a virtual format. It’s going to be something else. Our lineup is out of this world.

SLUG: From musicians to comedians to drag queens, this show is bound to be unforgettable!         Who are some of the performers we can expect to see this weekend?

Brinley Froelich: We’re excited for the entire lineup! We’re going to have some live-stream performances from local musicians like Marqueza and PK Opal, drag performances from Mona Diet and Obsidian, and comedians William Mierzwa and Aaron Woodall performing throughout the night. Cody Kirkland has offered to share a real-life horror story, and we also thought, with it being a full moon, we needed an astrological reading from Lily Wheeler so we can understand how the planets plan to fuck us over. The beauty of hosting this on a virtual platform means that we are not limited by our geography, too, so we’re excited to see Beau Mahadev streaming from Hong Kong with their “anarcho-noisy beep-boop” act.

Something I’m most excited about though—and I really hope people go all out with this—is our pet costume contest! We’ve reserved prizes from our donations to the best dressed pets. We want all the little furry and scaly friends to feel included in the festivities, too!

SLUG: Can you share with us a sneak peek of some of the items and goodies that will be auctioned off on Halloween?

Brinley Froelich: Our auction is now live, and bids are open until 10 p.m. on Oct. 31! The support from local businesses, bars, restaurants and artists was astounding. I’m planning on getting all of my holiday shopping done by gearing up for the bidding battles.

We have thousands of dollars worth of donations to bid on, from tattoo and hair styling vouchers, gift cards to local restaurants and bars, music bundles from local musicians, and gift baskets from a number of different local businesses. And for the people of color who donated, we’re returning 15% of funds back to them. I’d also encourage supporters to keep patronizing the businesses outside of our auction, too, as many of them have struggled from the impact the pandemic has had on our economy.

It’s hard to choose favorites, but I have to admit, the Ken Sanders Rare Book bundle and the homemade pickle assortment from Erin Moore really made my heart swell.

SLUG: What platforms can viewers use to watch the variety show?

Brinley Froelich: We encourage viewers to tune in using Zoom, where they can chat with each other and see other people in the “room”. In the event that someone can’t access the event through Zoom, we’ll also be streaming it live to our Facebook and YouTube accounts. Viewers can also tune in after they register while they bid on the silent auction on this event page.

Brinley Froelich: To stay up to date on this event and bid on items, people can RSVP and receive updates, or even donate without bdding through our event page at BetterUnite. We even have a limited batch of cute vinyl stickers there that they can purchase to support.

The Salt Lake Community Bail Fund’s website is the best way to learn more about our efforts and to donate outside of this event, and it includes our contact information as well. We encourage people to email us if they want to get more involved!