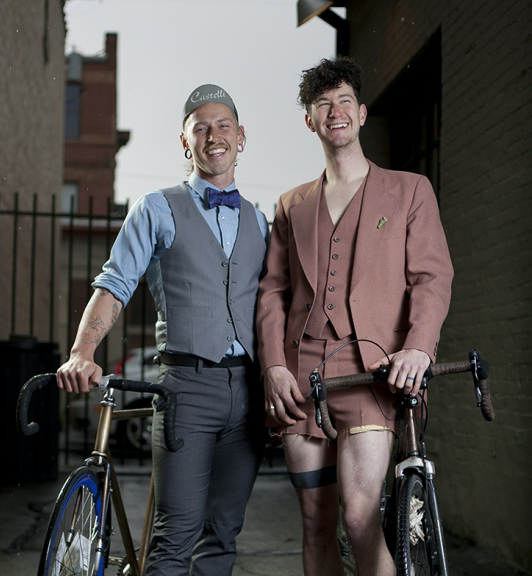 The aromatic month of May is once again dedicated completely to our city’s most sustainable form of transportation: cycling. The Salt Lake City Bicycle Collective is holding their fourth annual Bike Prom at Pierpont Place on May 10 at 8 p.m. after an open invitation ride around the city. I sat down with this year’s organizer, Jace Burbidge, and discussed the ins and outs of what this event is all about.
Bike Prom is a community-oriented gathering focused on creating cohesion between different members of the cycling community. “The whole idea behind it is to give an opportunity for all facets of the Collective to see each other, whether it’s people riding $1,000 road bikes, doing the MS ride, or the bike punk kids,” Burbidge says. This allows people who wouldn’t normally interact to get a glimpse of how other aspects of the Collective work.
The pre-prom bike ride, which meets at Liberty Park at 6 p.m., is a leisurely paced cruise through the city which is open to riders of all ages and abilities, from families to fixie freaks. “Anyone who wants to go is welcome. People are encouraged to ride trick bikes, tall bikes and tandems. It’s all ages and families are included. It serves as an introduction to get everyone socially involved and tries to help people get used to riding in groups around the city,” says Burbidge.
Beyond community cohesion, any excess cash will be funneled directly back into the Collective, which will supplement various charitable programs. “All the money in excess from the ticket sales goes back to the Collective, which supports children’s groups and goodwill programs,” he says. These programs are enriching, especially for low-income and at-risk groups. “We have an Earn A Bike Program where kids learn how to take a bike apart or about road safety, and at the end, get to take a bike home with them. We also have a goodwill program where we bring new refugees or people going through drug rehab down to the shop and get them on a bike for free,” Burbidge says.
The pre-prom bike ride will incorporate Burbidge’s favorite aspects from other popular rides around the city. “At the Bike Party they’re always having a good time, but it’s very law abiding and strict. Then you have the 999 or Midnight Mystery Rides that are very much all over the place and drunken. We want to encourage both in a safe, functional environment,” Burbidge says.
During the prom, there will be a silent auction for various Collective artifacts and my personal favorite, the Archetype Bike. “We got this fancy tandem in a couple of months ago—it just screams these neon-pink and blue colors. It’s nice enough where we could definitely sell it in the shop, but we decided instead to auction it off at the event,” Burbidge says. They’ll also be auctioning off one of their old workbenches and a bike that was on exhibit at The Leonardo. It comes with a photo explosion that shows all the parts and what donations they came from.
Burbidge had some interesting stories from last year, a few of which involved some notable choices of attire. “You can tell the people who haven’t worn their prom gear since prom, like it’s been 10 or 20 years and they try to fit back into it, which is excellent. We’ve also seen a few people who have built tuxes and dresses out of bike parts, tubes and the like. We definitely encourage creativity with outfits, but there is no dress code,” he says. The bit about bike parts has given me some amusing ideas, and I can’t wait to see what garb the night has in store.
In the spirit of your archetypal prom, there will be refreshments and even an area for bicycle- themed couples or group pictures. “We have the classic photos in the back corner, and we decided to use [the Archetype Bike] so we could do it on a tandem. We got an interior designer this year, and she promised to do the quintessential prom backdrop,” says Burbidge. Unlike your inevitably awkward high school prom night, Bike Prom will feature some “adult” elements to keep things—while, not by-default, smooth—engaging. “Bike Prom is a conglomeration of the things you loved about high school prom, getting to dress up and dance with your friends, combined with adult things like the ability to have a drink and some decent music,” says Burbidge. If you want to go all out, Especially For You is providing $5 corsages and $3 boutonnieres for those who preorder tickets.
With May barreling down the calendar, lassoing in a date or a group of friends should be a top priority. This isn’t your conservative high school prom, so feel free to be as creative as possible. Burbidge says, “If you want to show up to prom in a gold Speedo, that’s perfect.” The Collective is also on the lookout for volunteers, if you’re interested in getting a free ticket or being involved in the organization process. For more information about volunteering, you can call the Collective directly at 801-FATBIKE, or visit their website or Facebook page, bicyclecollective.org and facebook.com/pages/Salt-Lake-City-Bicycle-Collective.
Photos: