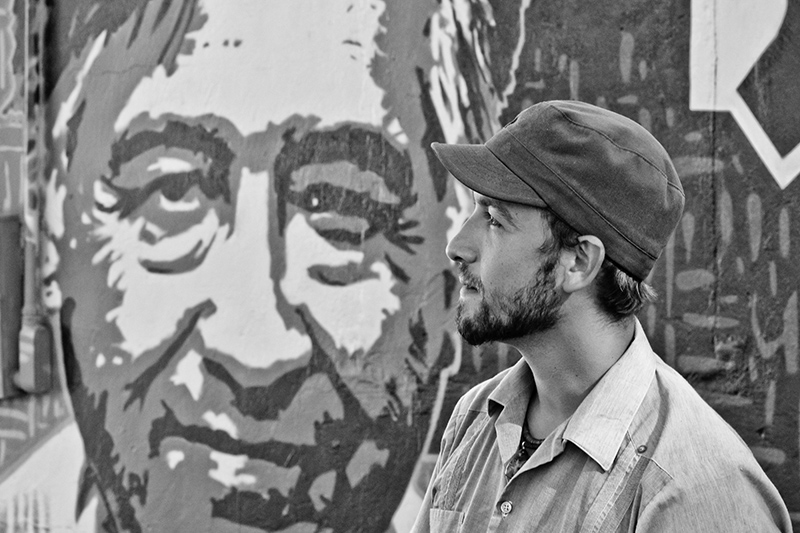 Miguel Galaz, one of the artists responsible for the mural projects at Taqueria Azteca Del Oro, reflects in front of an image of Cesar Chavez. Photo: Andy Fitzgerell

Dear West Jordan, This Is Your Community: Miguel Galaz

Miguel Galaz has been working to teach youth about art for the last few years in afterschool programs as a teacher at the Mana Academy, and going out to work on interactive projects in the community. When a close friend was working to turn an old building that had hosted a number of restaurants into a new, thriving enterprise, Taqueria Azteca De Oro, he worked with Miguel Dominguez to improve the graffiti-covered exterior of the building. As Galaz worked with community groups to paint murals with cultural significance around the building, he and his students were surprised when they were confronted by casual racism from passersby and resistance from the city of West Jordan over compliance issues.

“The whole purpose of the project is to bring cultures together.” Galaz says of his efforts, “Aztec, Pacific Islander and American cultures are all represented.” It is clear to Galaz that the kids he works with are attracted to graffiti art, so he harnesses that curiosity and fascination and turns it into a healthy dialogue and lesson on art vs. graffiti, and helps guide students through the process of creating a large piece of art from concept to paint on the wall. The pieces that surround the building range in style and execution, and all have positive and inclusive messages. The word “Cultural” is shaped out on one of the North-facing sides of the building, each letter designed by an individual student. Next to it, a large portrait of Cesar Chaves and Dolores Huerta frames the words “Si Se Puede” (Yes We Can). The old building, with cracking facade, is much improved by the murals and now stands out among the other old buildings and dirt parking lots lining the West side of 3200 W. and 7800 S.

The city of West Jordan insists that the issue is not racial, but merely an issue with code enforcement. No more than 15 percent of a building’s facade can be covered by “signage” and, according to city code, murals are included under the definition of signage. Currently, Azteca De Oro has murals on all four sides of the building, occupying well over the 15 percent limit. This might have been a clear-cut case, but the timing of the notice from the city just didn’t sit right. Before they had received any notice, Miguel and his painting groups had been regularly harassed by individuals from the community. “When we were out painting one day, one guy driving by in a truck stopped outside of the restaurant and began yelling at us.” Galaz recalled, “He was telling us to go home and to take our fiesta someplace else, using words like ‘wetback.’ He was really angry.” Ironically, Galaz and his young students were working on a painting of Mount Rushmore when they were confronted. The painting groups, often including large groups of kids, have been met with an onslaught of racially charged remarks being yelled from cars as well as offensive gestures.

The fact that the restaurant received notice of complaints about the murals after suffering so much cultural insensitivity made it easy to want to put the two together. Initially, Galaz tried to reach out to West Jordan seeking compromise, but his efforts were not met with open arms. “They avoided our calls and bounced us around until we were finally able to speak at a city council meeting,” Galaz recalled. “We invited the media, and suddenly West Jordan wanted to talk to us.” The city granted Galaz’s group an extension on removing the murals before they would incur a fine, and in the meantime, Galaz has met with city planners to discuss a change to the code.   “We didn’t want to fight back at the time, we wanted to be within what the city wanted to see, so we started buffing out some of the pieces that we worked on with the kids, but it felt too much like we were answering to the people yelling from their cars.” Galaz said as he explained an addition to the Mt. Rushmore piece, an image of a man sandblasting it away, the sandblasting tank at his feet labeled West Jordan City.

Since Galaz’s meeting with West Jordan received public attention, he has gotten great support from the community. A rally in support of the murals was held on Friday, July 23, with representatives from West Jordan in attendance. You can track the progress of the murals on Facebook at #keepourmurals.