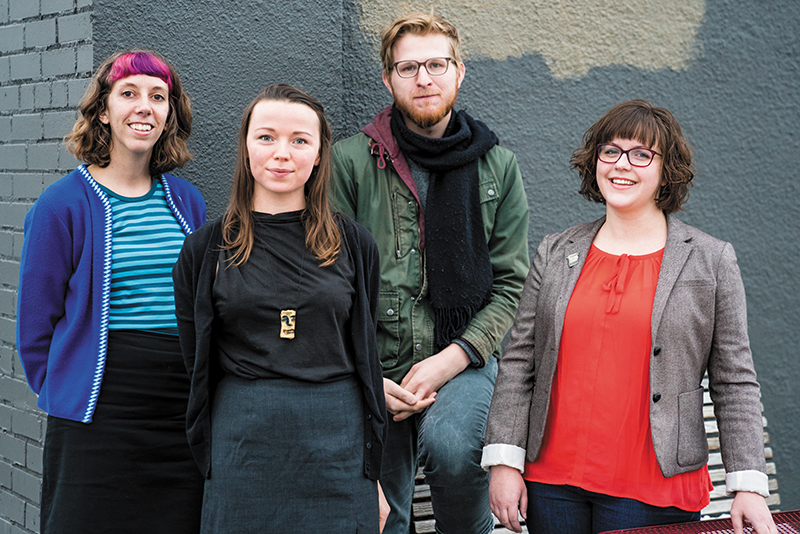 Over the last few decades, Salt Lake City has had no shortage of zine makers. Young illustrators, poets, comics, photographers, skaters and other creatives have favored this low-cost, uniquely personal medium as a means of distributing their ideas within their communities—SLUG Magazine even began in this way. However, just when it seemed like online platforms such as Tumblr and Instagram were working to render the form obsolete, the people behind Grid Zine Fest, taking place April 8 at The Clubhouse, have been working hard to support local zine makers and those keeping the print medium alive in the public sphere.

“I’ve always wanted an intentional-feeling zine fest for those around the state and around the region who are all doing a like-minded thing,” says Juli Huddleston, co-founder of Grid Zine Fest. “So when I first emailed [SLUG illustrator] Natalie [Allsup-Edwards], Natalie’s response was literally ‘I love organizing!,’ which I thought was the right spirit.” Both Huddleston and Allsup-Edwards have been making zines since their teenage years. Huddleston, an archivist at The Marriott Library and personal zine collector at the University of Utah, reached out to Allsup-Edwards after attending readings together and seeing her work in projects like Hand Drawn Photo Booth, the Local Artist Sticker Machine and her collection of personal print designs (etsy.com/shop/natalieallsupedwards).

Together with their dream of creating an intimate festival for zine makers, the pair spent the fall of 2016 hosting events like zine readings, bake sales and bingo nights in an effort to raise the necessary funds to host a free-admission zine fest. During this time, Bonnie Cooper and Timothy Burton Guthrie were inspired to join the squad through their shared appreciation of the form. The Grid Zine Fest crew now take turns occupying different roles for one another as they discover what it actually takes to pull off this kind of event. Sense of humor intact, the four refer to themselves on the official website as “a ragtag group of people who are totally winging it.”

Still, Grid Zine Fest seems to be well on the way toward being a success. The four have already solidified a venue, the Salt Lake Arts Academy (844 S. 200 E.), as well as a few financial backers to cover costs of space rental, tabling and promotion. While the group is not planning on walking away with any money, Grid is operating under the fiscal sponsorship of the Utah Arts Alliance and is thus able to accept charitable donations in order to grow the festival’s possibilities. One such major contribution recently came from Utah Humanities, who helped them bring Arizona-based artist Amber McCrary—author of zine series like Native American Feminist Musings—to lead a free workshop at 11 a.m. on April 7 at the Marriot Library. While more workshop leaders are yet to be announced, Grid will be a new chance for people in Salt Lake to learn from current zine creators. Their free classes will be available to anyone interested and will cover a variety of zine making strategies, such as basic printing outlets, finding inspiration and adopting zine making as a lifetime hobby. “For those not familiar with zines,” writes McCrary, “zine fests [like Grid] are a great introduction because they can explore all the different tables and meet the actual zine creator and ask them questions behind their creation/zine.”

If you’re already making zines in SLC and want to participate, tabling at Grid Zine is only $15 for a half table and $30 for a full table. Grid only requires that 75 percent of your materials be zines if you have other accessories to sell/trade, and that you abide by their safer spaces policy (no racism, sexism, homophobia, transphobia, xenophobia, etc.). Grid will also designate certain tables as “kid-friendly” to accommodate all spectators. They’ve already received table submissions from many styles of zine producers, and while a large portion of the fest is dedicated to teaching newcomers, Grid values keeping the trade-and-swap tradition alive within the existing local zine culture. “I think it’s important to know people in your city and have the chance to trade,” says Cooper, citing one of her local favorites, Dithering Doodles by Steve Anderson. “He just gives [his zines] out to people … He just wants to share, and you would never find them online.”

The folks behind Grid Zine Fest are looking forward to discovering new talent within our city.  “You meet little pockets of people who are doing interesting things, and they don’t realize there’s a bunch of other people also making zines,” says Allsup-Edwards. “We’re excited to try and unite the zine community.”

Grid Zine Fest is free and open to the public and takes place 11 a.m. to 5 p.m. on Saturday, April 8, at the Salt Lake Arts Academy (wheelchair accessible). There will be an after-party celebration at Diabolical Records. The deadline to reserve a table is March 10, so make moves if you haven’t already. If you’d like to get involved or have questions, email gridzinefest@gmail.com or visit gridzinefest.org. And finally, if you just can’t make it this time around, the Grid crew hosts a monthly zine club for people to meet up and with other zinesters in the community. As always, everyone’s welcome.