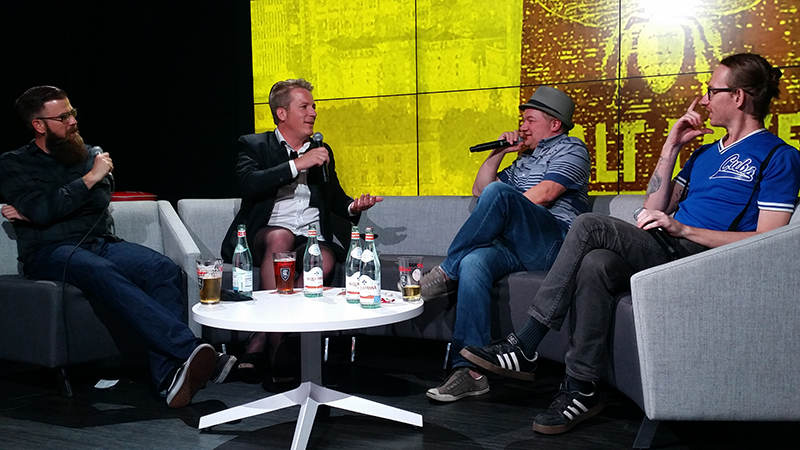 I Am Salt Lake: Live

Chris Holifield has created a podcast that embodies what it is like to be a part of one of the best cities in the country. The I Am Salt Lake podcast has released 192 episodes as of this article’s publication, covering all sorts of SLC folk, including musicians, activists, artists, comedians and public figures. He brought his podcast to the stage at The Club at 50 West downtown, bringing together a stand-up comedian, a radio host and a talk-show host for a night of weird questions, even weirder answers and a hefty dose of The Beatles hate.

Starting off the night was legendary local comedian Levi Rounds entertaining the crowd with his standup fare. He maintains that he is not a hipster, though random strangers have accused him of being one because he lacks the ample derriere to hold his pants up without suspenders. Rounds talks about insecurity, anxiety, self-medication, and Garth Brooks. He’s recently taken up golfing which, for most men in their 30s, would not be comedic fodder—but have you seen Rounds? He’s the exact opposite of any golf enthusiast, but he does tout the advantage of playing a sport that allows one to drive around drunk.

Holifield joined him onstage to begin the familiar question-and-answer portion of the I Am Salt Lake podcast, yet with slightly more irreverent questions. I Am Salt Lake typically delves into the lives and stories of individuals that make up the fabric of this great city. However, because Rounds, Kerry Jackson and Paul Duane had each been on the show previously (episodes 122, 74, and 176 respectively), their stories and accomplishments have already been discussed at length. So, Holifield what any great host would do—he asked hard-hitting questions, some of them involving zombies. Holifield asked for advice that Rounds would give to his younger self on the first day of High School, and he was obviously not expecting the mostly-joking answer of, “Kill yourself.” They discussed some of Rounds’ weirdest moments with roommates, what he would choose for his last meal, and what he would do if he became president. The biggest revelation was that Rounds unapologetically and absolutely hates the Beatles. Jackson was next up, and entered the stage spectacularly with a queued up version of “Let it Be” by The Beatles, prompting Rounds to run off the stage in disgust. However, in a moment of forgiveness, he did return to the stage to banter with Jackson and Holifield. Jackson has been a longtime radio personality and DJ in the state, who can currently be heard as part of the X96 Radio From Hell show, as well as the Geek Show podcast. He’s perfectly comfortable with a microphone, and extremely entertaining with his quick wit. It’s revealed that if he were to ever become Governor (it’s not in the plans) he would privatize liquor sales in Utah. And if he got bigger than that as President? He’d deregulate the FCC, because, of course. We also find out that Jackson knows a scarily abnormal amount of things about zombies and the impeding zombie apocalypse. Holifield learned the hard way that you cannot simply ask a zombie-phile about what he would do in the zombie invasion, because you’ll be met with a barrage of follow up questions like, “Are they fast zombies or slow zombies?” among others.

Finishing out the trio of talented individuals was Paul Duane, entering the stage in his signature short shorts, pantyhose and black heels. He recounts how the style came to be after a strict Mormon upbringing. Jackson awkwardly asks about his shoes, “Are they women’s size?” Holifield got to ask Duane just a few questions before the silliness of the four of them on stage devolved mostly to making jokes about being raised Mormon and how much Duane hates karaoke. This is not a bad thing, as absolutely everything about this four-way conversation was the height of entertainment. The guys talked about some of their “firm stances” that they had on various subjects, such as Round’s hatred of the Beatles and Duane’s hatred of karaoke. They were schooled by Jackson, who said, “I used to be you guys, and then I mellowed the fuck out.”

The banter between the four of them was priceless. They were able to ask each other some final questions before the audience questions. Local photographer Cat Palmer got up to ask about their guiltiest pleasures. Duane’s guilty pleasure is the band Simple Minds. Jackson, who has been a DJ since the days of Simple Minds remembers the first time he had heard them and said to himself “That sounds like Billy Idol on ’ludes.” Soon after, the panel of guests were more interested in asking their host about his stellar beard. I have never learned more about beards in my life, and I think we all left more informed about the process that a beard undergoes to look fantastic. It’s pretty hard work—you’d be surprised.

I Am Salt Lake is available for free on iTunes, Stitcher, or your other favorite podcast platforms. You can also view all of the past episodes and more information about the show at iamsaltlake.com. The Club at 50 West hosts comedy, live music, and other live entertainment. To see what they have coming up, you can like them on Twitter, Facebook, or check them out at 50westslc.com.