A few people firmly placed themselves in front of the stage and watched three performers of The Bad Kids Collective as they performed various tasks, ranging from making potions to collecting organs from a headless bust—all while completely oblivious to the patient onlookers.

The Dark Side of Taboo: “Mystic” by The Bad Kids Collective 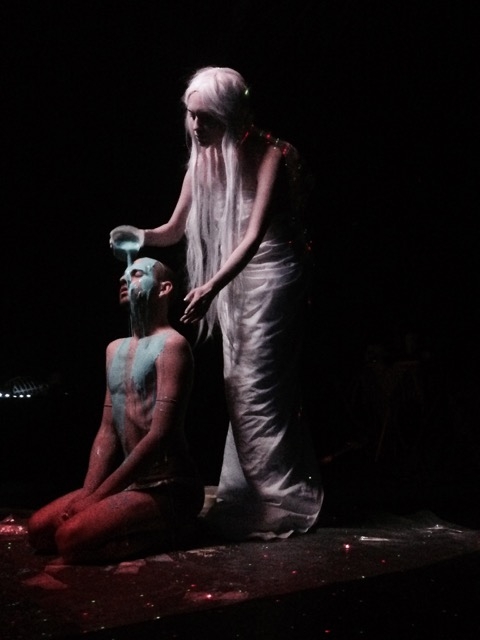 Arousalind pours green wax over ODGE’s head at “Mystic,” a Bad Kids performance exploring magic and witchcraft. Photo: Barnabas
The atmosphere at the Metro Bar was upbeat and lively. Under the pink and blue lights, various people mingled and danced to the beat of incoherent techno music played by Dj Artemis. A few people firmly placed themselves in front of the stage and watched three performers of The Bad Kids Collective as they performed various tasks, ranging from making potions to collecting organs from a headless bust—all while completely oblivious to the patient onlookers.
Before the show started, there were a myriad of artists and vendors who were selling their goods or creating their own art. The first group of artists was located just inside the doors. They were creating two separate paintings—one of a centaur painted in light blues and greens rearing itself towards the sky against a dark yellow background, the other of a woman painted in dark blue, purple and green. The second painting had a sense of weightlessness and breath due to the long, flowing brush strokes which made up the woman’s face and hair.
Near the end of the bar, a pyramid of inverted pictures were taped to the wall. They gave a sense of controlled chaos since they depicted religious relics, pot, Allen Ginsberg and sexual acts. Its arranger, Auntie Christ, emitted an air of nervousness as they shifted their weight from one side to another and continuously ran their fingers through the 20 sheets of paper which contained various poems they would read while seated in front of the pyramid.
Next to Christ, Crone’s Hollow set up a table that was offering tarot card and crystal ball readings. The woman who operated the crystal ball proclaimed herself a witch, claiming to know the essence of spells. This aura of magic and powerful mysticism was betrayed by the cliché halloween-esque decorations which littered her table, entangled in the black mesh on her hat. She spoke with bravado and confidence and her smile that made clear she relished the environment.
The show began with the three members who were on the stage. The anticipation began to build as the crowd grew to the capacity of the dance floor, turning to sheer appreciation and wonderment when all eyes were fixed upon the performers onstage. The three performers were clad in skeleton, demon and witch outfits. Their bodies moved with purpose to the “I Put A Spell On You,” cover song by Annie Lennox. They accentuated the taboos of mysticism, witchcraft and evil as they now performed voodoo on dolls and played with human organs. Their exaggerated actions played on the fear of powerful women and its long and deadly past a recognition of their power through avenues of witchcraft, death or hell.
The second act featured Arousalind—clad in all white from their toga to their wig and opaque face paint—and ODGE, who only wore a flesh-colored high-waisted pair of shorts. Their performance emphasized the strenuous and arduous task of being on one’s own. This was done by the change in music and style of movement when alone and together. While alone, ODGE explored the stage, contorting their body to the sound of distorted clocks. This created an eerie feeling, for the frequency and way they contorted their body was reminiscent of an exorcist movie. While together, however, ODGE and Arousalind swayed slowly with easy-going fluidity. The music, as well, became softer and gave the crowd a more relaxed feeling than that of agitation when ODGE was alone.
The final performance began with three people on stage. Two of the performers had masks, one of a rabbit and one of a tiger. The third performer had a white toga and a laurel leaf headband. In the crowd, a fourth member appeared and beckoned them with their finger to a table in the center of the dancefloor. The three made their way briskly through the now parted crowd—who were bewildered by the sudden break of the fourth wall. The member with a laurel leaf headband and toga was escorted onto a table and stood with their hands tied above their head. The three other members began circling the table—moving faster and faster. From their accentuated movements, it was clear that they were enacting a ritual. The highlight of their performance was the sacrifice of the laurel figure.
On the outside patio, cigarette smoke mixed with the open air as the spectators discussed the recently witnessed show.  An easygoing feeling emanated through the bar as the last dying embers of the crowd were doused and broad smiles populated each departing face that all vehemently vowed to return to the next Bad Kid’s performance.
Photos: