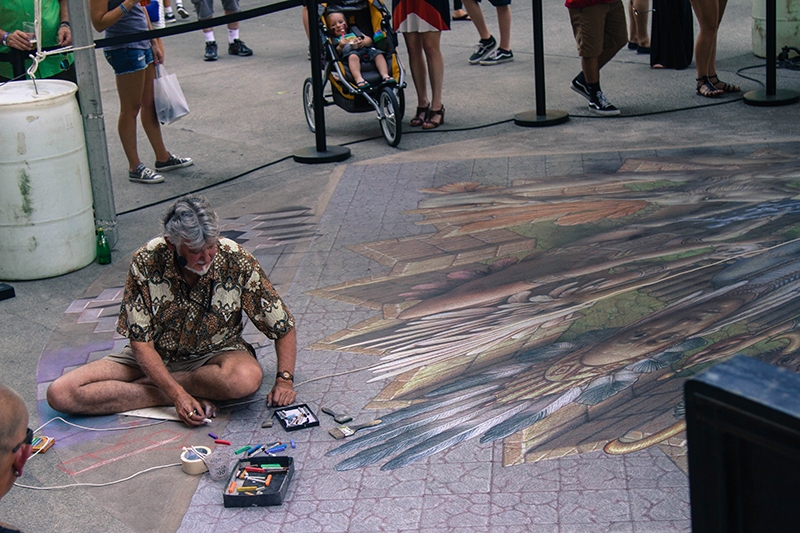 On its 39th anniversary, Utah Arts Festival 2015 was bigger and better than it has been in years. This year, artist workshops, kids’ exhibits, orchestras, short films, poetry slams, and more were all among the activities. Children splashed happily in the cool water fountains while their parents enjoyed music from one of many festival stages. Teens and young adults added their unique touches to the event with the graffiti wall at the Urban Arts Center. Lucky 13, The Pie and other local restaurants served their flavorful food.

Under the heavy rays of the sun, artists from all over the country gathered. Dance groups performed on the Main Stage and a smattering of older men playing the sitar and sarod were scattered throughout the grounds like cherry tomatoes in a salad. Uinta set up enjoyable patios, covered by the shade of trees, but rolled out the lavish carpet by pricing their 12 oz. cans at seven dollars apiece. Some men and women wore PJs, rode on trikes and scurried around like roaches in light as they sold peanut butter and jelly sandwiches with milk. Obviously, they had never watched Anchorman.

The artists featured included painters, photographers, potters, pen makers, wood carvers, knife smithies, and metal-welding outdoor furniture savants. Most vendors were patient and attentive in their own elegant way as they watched curious fingertips scan their products. Freshly-polished opal glittered in the sunlight aside murals made from paint swatches (which resembled organized chaos through squinted eyes but whose composition and subject matter was plain as day through a camera lens). Pottery doused in copper showed off bold horsehair lines with pride. Apparently, horsehair is not as flammable as other hair and can be used to halt oxidation with pottery coming out of the kiln. This technique results in strong black lines which sprawl across the surface of the piece. Vendors who sold wood products talked about the recent and ironic burning down of the Rutland Plywood Company’s wood factory. This company produced “Dymondwood”—wood infused with different elements compressed with acetone and segments of color to make it pop—which is mainly used for pens and hair combs. The company that owns the patent is now deciding whether or not to rebuild or to sell their rights—either way, most vendors who used wood as a medium eagerly anticipated the decision.

To be an accomplished full-time vendor, one must travel the country. The whole circuit can last over 300 days a year—even most holidays are spent on the road. Days off consist of making more jewelry, art or prints. On average, a total year’s expenses range from between 50 and 80 thousand dollars. “We have to pay for hotels, food, travel, shipping our booths and raw materials,” a vendor selling seashell jewelry explains. “Doing this job, there are a lot of ups and downs. Some weeks I make a lot of money and sell all my best wares, the next, no one buys any of my leftovers.” Being able to constantly produce and move takes its toll, but if done right, it can pay off. “I get all my shells from the beaches of Venezuela,” he says. “While I’m there, I’m able to relax and I try to take my son with me whenever I can.” It’s a lifestyle which takes time. Just like with Renaissance Faire culture, vendors’ lives revolve around the festival and this lifestyle has its own community. Even though what they’re selling could seem overpriced (and in some respects, it is), the toll and expenses of constant travel definitely warrant the price tag associated with these fine handmade crafts.

The only downfall of Utah Arts Festival 2015 was the $12 admission fee and the scarcity of younger artists. This price cut down the large number of people who probably would have attended if it were less expensive (perhaps the festival committee learned from the egregious crowds at the Twilight Concerts and priced accordingly). A new, younger flavor could have been added if there were graphic designers or indie video game producers present, though that could come with time. However, that being said, a myriad of photography projects heavily edited with photoshop made a resounding appearance. Images of characters defying gravity or of a chimpanzee with a golden halo cradling a child broadly challenged the ideas of creationism and poked fun at the debate over evolution. Small figurines crafted from trash that looked like the toys belonging to the creepy kid in Toy Story also stood out to me. The focus on pottery, oil on canvas and sitars is still geared toward an older audience, and understandably so—they’re the only ones who can really afford a $700 sterling silver bracelet.

Overall, Utah Arts Festival 2015 was a success and all who came left with something they liked. The expression of art is something precious to the human condition and for a few days, here in Salt Lake, our experimental, creative condition was explored.