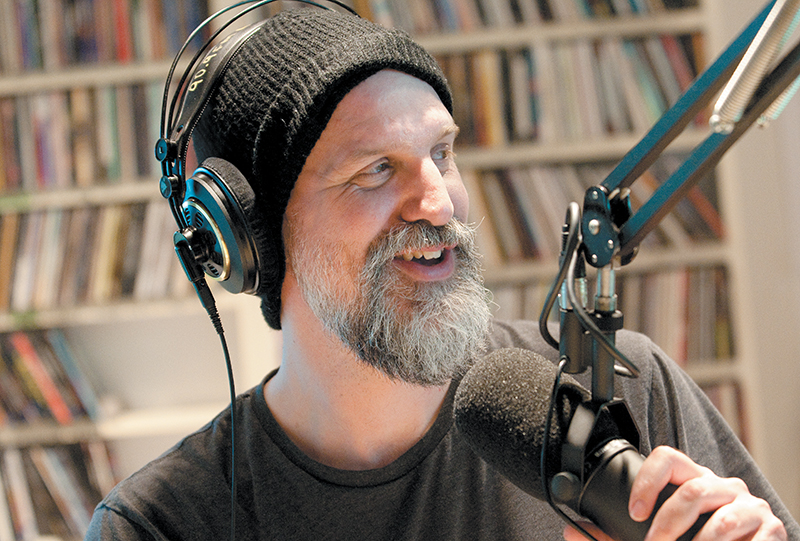 During Wheeler’s hospitalization and recovery period, Wheeler would quickly gain a newfound respect for the healthcare industries and the compassion, empathy and humanity that they bring to work everyday. Wheeler had a long healing process ahead of him. “I was lucky,” Wheeler says. “Because I’m so tall, it saved my knee, and most likely my leg.” Instead, he broke his fibula, the small bone below the knee. Doctors also informed him that his leg was degloved, which is as horrific as it sounds. “My leg was skinned from the knee down to the calf,” Wheeler says. He went on from the emergency room to a lengthy hospital stay and to the burn unit, where Wheeler had to have skin graft surgery to further repair his leg. All of this has been a difficult experience for Wheeler. “It’s hard to think about that day,” Wheeler reflects. “It’s hard to look at my leg without a little PTSD.”

At one time during his hospital stay, a priest walked into his room and asked what was on his mind. “I told him about Joe and how much I loved him and how I never imagined that I would have a best friend [who was] in his 90s,” Wheeler says. The priest sat quietly for a moment before stating, “God thinks about you when you think about other people.” Wheeler tears up when he recalls this story, because that is exactly what Joe always taught him: “Be kind, give back and be selfless and not selfish.”

It’s worth repeating: “God thinks about you when you think about other people.” Brad Wheeler is always thinking of other people. The music and wisdom he gives us strengthens and diversifies the community in which we live. It helps to inspire people to open blues bars, independent record stores and jazz nights. It promotes local music and opens venues to house them. Wheeler’s influence also helps bring in national acts that otherwise would not come through our town. He inspires artists who help to breathe life into this community, this city and this state. Brad Wheeler gives so much that when it was our turn, it was easy to give back: from the nurses and the doctors in the emergency room, the 24-hour hospital staff, the children singing to him during his stay in the burn unit, the neighbors willing to change bandages, the friends bringing food and groceries, family getting him to doctor’s appointments and strangers willing to help in any way they can—even if it meant lifting him from room to room.

Wheeler has medical insurance. However, Wheeler is looking at a year’s worth of outpatient treatment with the Burn Trauma Intensive Care Unit, and the medical costs—plus having to miss seven weeks of work, despite having vacation time accrued at KRCL—add up. A crowdfunding campaign was set up on April 17 to help contribute to Brad’s medical expenses. In just one month, 330 people met and exceeded the $20,000 goal, which will go toward helping Wheeler with co-pays and unanticipated, out-of-pocket expenses. “I’ve had to buy things like slippers, sweatpants, compression underwear and basins to wash my leg in—also medical supplies to change my bandage, Lyft and Uber rides to the hospital …” says Wheeler, who has been focusing his efforts on healing enough to start walking again. “There’s a lot of little things that pile up fast.” A few local businesses also helped the community give back to Wheeler. Diabolical Records held a silent auction on Record Store Day with items donated by other local businesses, and his former place of employment, Ogden bar Brewskis, held a benefit concert for Wheeler on May 14. Additionally, Urban Flea Market’s Kate Wheadon donated all of the admission fees from the first Rock n’ Roll Swap Meet to Wheeler. “I am overwhelmed by what everybody has done for me,” Wheeler says, fighting back tears.

Wheeler is slowly getting back where he needs to be—where we need him to be. He is back to work on a half schedule for his Little Bit Louder Now radio show, which is currently on air Monday–Friday, 4–6 p.m. “If you see me out and about, or at a show,” says Wheeler, “stop and say hello.” McQueen is still breathing 97 years of life into his saxophone, and the world is a better place for it. Of course, Bad Brad Wheeler is still dealin’ the blues—that which makes him the happiest. He is always within arm’s reach of one of his harmonicas, and he knows that a simple blues riff on that mouth harp will always make things a little better—like ketchup.