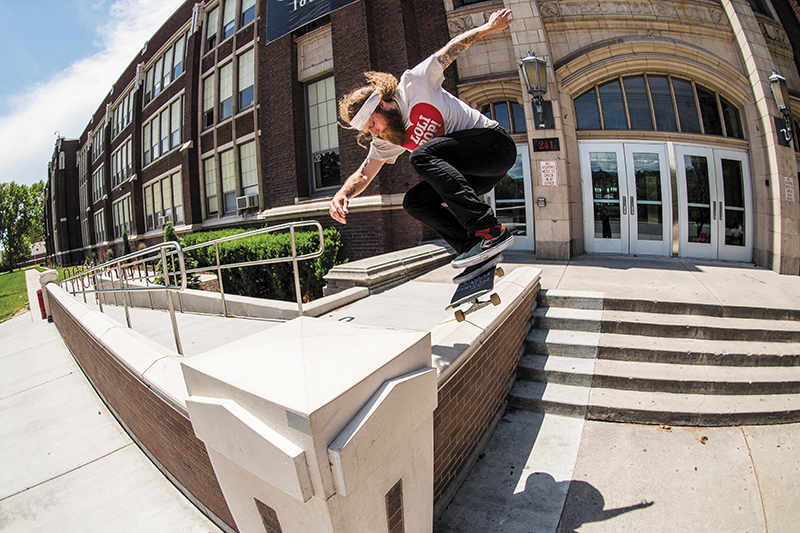 Rocking n’ Rolling On and Off the Board: TCOY Coughlin

I’ve heard the name TCOY for years, and I’ve even bought some boards from him at Blindside in the past, but I’ve never actually known TCOY (aka Troy Coughlin). A fellow Californian by birth who screams SLC, TCOY got his start amid the rolling plains of Indiana, only to make the move to Utah a mere four years later. Regardless of his upbringing, he’s a rad dude and he rips, both on the drums and on the board. He skates just like you think a tattooed guy with a big beard would, too—going for it on risky spots, like Brian “Slash” Hansen or something, but cooler because he plays music too. When it comes to his skating, we’re talking 50-50 front shuvits on sketchy uprails followed by equally sketchy hill bombs, just like a bearded man would. And the music? Straight rock n’ roll—with a dose of psychedelia. So, if you haven’t heard of Max Pain and the Groovies, the band in which TCOY slays the drums, now’s a good time to toss on a track. A double threat, TCOY appreciates the greatest gifts to earth: skateboarding and music. SLUG: What came first, skating or music?
TCOY: Skating. I started when I was in Indiana. So I was like—I moved here at 11—so probably at the beginning of age 11. The Great Plains, everything’s flat, you know, so I just wanted to skate to the homie’s house. I was at Toys ‘R’ Us and they had the [Geoff] Rowley graphic that was in Tony Hawk Pro Skater 1—I’m pretty sure it’s a Rowley graphic. It was one of his decks, and I was like, “Well, that’s the one.”

SLUG: What got you into it, then? Did you set out seeking a board that day?
TCOY: Well, yeah, I wanted to start skating. I think my sister made me a board for my birthday that wasn’t tight, but I was like, “Rolling around rules!” Especially, since everything’s flat, so just skating to the homie’s house, it was quickly, “We’re bored. Let’s mob around.”

SLUG: How about music? How’d you get into that?
TCOY: Yeah, same thing. I made a guitar out of cardboard and rubber bands, and that was that. Then, I moved here and I seriously wanted to start a band in fifth grade, but nobody played the drums. I was like, “Alright, I’ll bite the bullet.” And I fell in love.

SLUG: Between music and skateboarding, which one came easier?
TCOY: I don’t know. I feel like I still can’t do either (laughs). They’re both hard. Fuck, I really don’t know. Music probably came easier. Learning tricks took me a long time.

SLUG: As far as skating goes, who were some of your early influences?
TCOY: Rowley rules. I was way into Erik Ellington—still am. When I was way young, I loved Mike V. “This is Skateboarding” was my shit. My first video was “Sight Unseen,” so Heath Kirchart. I’m gonna say I definitely idolized Heath Kirchart. Still do.

SLUG: Do you have a favorite local skater?
TCOY: I’ve been thinking about that, ’cause Dirty [Hadley]’s insane. But I’m gonna say Christian Bourne. He rules—best dude. But there’s a million.

SLUG: What about a local band, beside your own?
TCOY: Let’s see. Oh! Heavy Dose! Heavy Dose is sick. And Breakers. Yeah …

SLUG: Alright. Where do you usually skate?
TCOY: The streets. In the past couple years, I always got in the loop of going to the skatepark and that’s it. I haven’t been to a skate park in a long time—a long time being like, two months, or something. But I’m just trying keep it in the streets. I like it. Ball Sack, my good friend—He’s got a camera and he lives in the apartment next to me, so we’re just filming all over.

SLUG: Are you working on a video?
TCOY: I don’t know what it’s gonna be. But we’re filming clips.

SLUG: Do you have a crew, then?
TCOY: When we’re on the road, I skate with Kallan Campbell all the time. He plays bass. He’s fucking crazy. He’s so good. He doesn’t skate as much as he should, but he’s one of those dudes: If he doesn’t skate for a month or week, he’s gonna be amazing either way. It’s that Asian talent or something. But yeah, usually just Ball Sack or the Blindside crew.