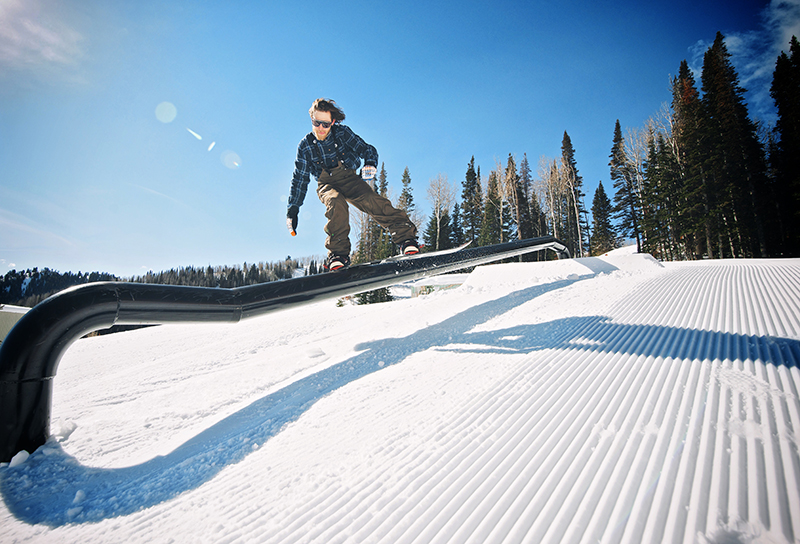 Salt Lake is one of the few places in the country where incredibly talented, pseudo-pro snowboarders drink at our bars, work at our jobs and eat at our restaurants without ever hinting to anyone of their athletic prowess. If you really knew that the busy waiter hustling around your table and selling you the nightly specials was earlier that day blasting front 540s off a 50-foot vertical in the backcountry or hitting 50/50s on the rails at the high school, you’d probably be quite impressed—and maybe even a little embarrassed—for not taking him more seriously. Tucker Brown, local badass snowboarder, is exactly that type of Salt Laker: an extremely talented rider who keeps his endowments to himself. If you met him on the street, you might suspect that he was a badass in one way or another—there is a humble confidence about him—but besides that, nothing about his demeanor or look gives off “snow bro.” The 24-year-old East Coast native technically isn’t a professional snowboarder, but he is sponsored by companies like Signal Snowboards, Blindside and Dang Shades (to name a few). He rides as many days as he is allowed by his other job as a full-time cook at the hip new downtown restaurant Manoli’s. Why Brown really makes a difference in the SL snowboarding scene, however, is due to his flawless style and innovative video parts with his riding and film crew, SEGCOS. At the start of our interview at Sushi Groove, Brown made it very clear that SEGCOS isn’t a professional film production crew nor retailer. “We’re a group of local shredders who believe snowboarding shouldn’t be polluted by money or an image,” says Brown. “As a sarcastic response to the dudes out there taking snowboarding and themselves too seriously, me and my buddy, Andrew Nagel, decided to create an all-inclusive riding and film crew called the Super Exclusive Gentlemen’s Club of Snowboarding.”

Fair enough. Although Brown’s hellbent on giving credit to the whole team and not only to himself, as a local rider, he definitely holds his own. Brown’s standout riding style makes snowboarding look incredibly easy—effortless, actually, is the better adjective. Like many snowboarders, all the standard kill-it tricks are up his sleeve: front- and back-side airs, methods, fakies, nose grabs, tail presses. In short, Brown knows how to ride. It might be true that Brown and his SEGCOS crew don’t have any professional “film production credentials,” but that didn’t stop the group from making three independent films: 3Deep5Me (2013), Urban Retina Display (2014) and AEM (2015), which highlight Brown along with 30 or so other riders.

Just like anybody else, Brown had to begin somewhere. It all started at the age of 11 when one day, Brown’s grandparents gave him a Vokl racing snowboard that they randomly found on the side of a road. “Did your grandparents know you were interested in snowboarding, or was giving you the keystone to your life’s passion entirely coincidental?” I asked curiously. “Ironically, I was already wanting to snowboard, but my grandparents didn’t know it at the time,” Brown says with a smile. “I rode that Vokl 161 all through highschool and during my first few years in Utah, until a buddy finally gave me his old Forum Destroyer to ride instead.” Snowboarding conditions in New Hampshire are rarely optimal. Most of the time the snow is wet and heavy and the slopes are icy, which is why a lot of fantastic riders come from the New England area—they’re forced to work with what they’ve got. If a rider “makes it” out there, it’s not just because they’re good at snowboarding—it’s also because they have to possess passion, persistence and a positive attitude to survive discouraging conditions. You can see those traits in Brown, too. “The hardest thing about snowboarding is learning how to do it,” he says. I believed Brown, considering where he learned to ride, but regardless, watching him makes you think otherwise. His style, vibe, mojo (however you wanna slice it) is so graceful that it actually invokes an illusory confidence that anyone can shred just like he does. It’s like watching a professional athlete during the Olympics: They make you believe their craft is simple enough to conquer on your own. Brown has that same power.

It’s no surprise that Tucker chose to attend the University of Utah to be near the mountains—plus, he fits in seamlessly with Salt Lake snowboarders. “It was in college and through the snowboarding community that I met Nagel, who is the brainchild behind SEGCOS,” says Brown. “We started SEGCOS because a lot of us who ride together wanted to just make cool snowboarding videos without the exclusivity that commonly happens among riders.”

The SEGCOS crew’s films are interesting from the get-go. Each movie has an overt indie vibe, unorthodox soundtrack and distinctive shots—a lot of tilts and stuffing (close-ups). For instance, Brown’s part in AEM is him shredding to Whitney Houston‘s “I Will Always Love You.” Nagel gets creative by using nontraditional equipment like a Panasonic HVX Camcorder and a DSLR (Digital Single Lens Reflex) camera. “Nagel does everything when it comes to our videos. He produces, edits, chooses the music and films,” says Brown.

With Nagel’s tight grip on every level of production, I wondered if he tries to direct the riders into sequences that most complement his filmmaking style. “Is Nagel a very hands-on director?” I asked. “Not at all,” says Brown. “It’s quite the opposite, actually. Nagel respects our riding just as much as we respect his filmmaking talent.” Maybe that’s why SEGCOS has come so far since its conception—riders can feel comfortable being themselves. “What’s the culture of the SEGCOS crew like?” I asked. “It’s like the ‘Island of Misfit Toys,’” says Brown. “Anyone is invited to ride with us. When we first began, we were riding with 20–30, but the group has dwindled to just a handful of guys. We still aren’t exclusive though. It defeats the purpose of being who we are.”

With their devil-may-care attitude and down-to-earth style, the SEGCOS crew is definitely turning up the local snowboarding scene in Salt Lake City. You can watch the Super Exclusive Gentlemen’s Club of Snowboarding’s films online and for free, or join ’em on the mountain (you know they won’t mind). Whether you ride with these kids or not, check them out—you won’t be disappointed.