When the last bell rang at Valley Christian School in Kearns, 8-year-old Anthony Lucero gathered his things just like the rest of the students. Only instead of heading for the door to be free until the next morning, Lucero headed to another part of the building. Lucero and his friend Garritt Tucker, whose mom was also a teacher at the school, needed a way to pass the time each day. The two of them would unfold sheets of computer paper—the kind that was attached together with feed strips down each side—lay them out and just draw. 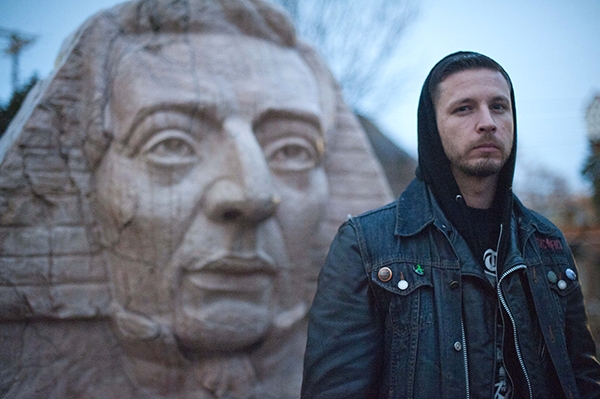 When the last bell rang at Valley Christian School in Kearns, 8-year-old Anthony Lucero gathered his things just like the rest of the students. Only instead of heading for the door to be free until the next morning, Lucero headed to another part of the building.

Valley Christian School was a K-12 institution with around 60 students total. Lucero’s mom was an English teacher for the junior high– and high school–age kids, and was often stuck after hours grading papers and finalizing lesson plans—which meant that he would be stuck there, too.
Lucero and his friend Garritt Tucker, whose mom was also a teacher at the school, needed a way to pass the time each day. The two of them would unfold sheets of computer paper—the kind that was attached together with feed strips down each side—lay them out and just draw.

“We’d have contests to draw sharks and other creatures and just make them as long as we could,” says Lucero. “Every kid gets showered with praise for whatever they do, but that’s the earliest encouragement that I can remember.”

Like most kids, comic books and cartoons influenced Lucero’s drawing style. As he discovered Teenage Mutant Ninja Turtles comics and James O’Barr’s The Crow, he began to emulate what he saw. He always kept drawing, moving on from sharks to detailed portraits. Lucero kept progressing, but he never got too serious about it—especially because art classes at a Christian school weren’t the most involved or rigorous.

“When I got to high school, my teacher was just like, ‘Do whatever you want and I’ll give you a grade based on what I see,’” says Lucero. “She trusted me and just let me draw, but looking back, it would have been cool if I’d had a more focused learning regimen—someone to actually go ‘try this’ or ‘use this material’ instead of just ‘do whatever you want.’”

Eventually, Lucero transferred to Kearns High and, after he graduated, he slowly began rebelling against his Christian-school upbringing. Nothing too drastic, though, because his mother “was never an example of the hypocritical insanity I was exposed to there,” says Lucero. Still, whatever is forced upon children the most will be the thing they ultimately rebel against the hardest.

He played guitar for a few hardcore bands, started attending local all-ages shows and hanging out at the place that all young, heavy-music-listening art lovers go—tattoo shops. It was there that he discovered he might actually be able to take his artwork somewhere besides his sketchbook.

“When I first started hanging around Lost Art, Fletcher Booth had his art hanging there,” says Lucero. “That spoke to me in a way that I hadn’t had art speak to me before. I started working with charcoal and basically just biting his style because it was so awesome.”

Lucero was still looking for his voice, so he tried a little bit of everything. He couldn’t make the charcoal work the way Booth could, so he began adding other elements, trying to find a style that he felt comfortable with. He was also discovering new artists all the time, taking everything in and letting their work percolate in his mind. He found influence from all different styles, from the album artwork of Nick Blinko of the U.K. band Rudimentary Peni, the great Pushead (a.k.a. Brian Schroeder) and Raymond Pettibon—the artist responsible for almost all of Black Flag’s album art—to Renaissance artist Albrecht Dürer.
Dürer was someone who Lucero never knew by name, though he had seen and remembered a lot of his work. His incredibly detailed pieces were hugely influential and stuck with Lucero as he found his way. When neither charcoal nor paint gave Lucero the satisfaction he desired, he stripped everything away and settled on intricately detailed line work and inking. He began to identify with Durer more than any other artist, because his pieces could inspire feelings and draw out an emotion that was forming below the surface. That’s what Lucero was after, too.

“Some of it is so twisted and so dark that, looking at it when I was a kid, it gave me that feeling in my gut,” Lucero says of Dürer. “He was able to do something that makes you feel unsettled, but was still, for lack of a better term, a ‘pretty’ piece.”

Lucero started focusing on line work and realized that was what he did best. He has an enormous amount of patience and a remarkable ability to use grayscale to his advantage. Lucero’s pieces have been stripped to the core and forced to survive solely on attention to detail and the focus of a tightrope-like style in which each piece can be ruined by a simple twitch at the wrong time. He doesn’t use computers, so every line, every shade, every detail counts.

As Lucero started getting more comfortable with his art, he started showing it to more people—particularly the members of his band, Gaza, the chaos-infused metal band he’s played bass in since 2006. The band started using his drawings for shirt designs, which boosted both his profile and his confidence. Soon, other bands were seeking him out for their own artwork. Lucero began designing logos and album covers for bands like Colorado’s Call of the Void and Portland’s Elitist.

“It’s hard to distinguish whether people want the guy from Gaza to do the art or if they actually want Anthony Lucero to do the art,” says Lucero. “Either way, it’s fine because it’s giving me the opportunity to keep drawing and I’m willing to do it to take it to another level.”

On Gaza’s last tour, which ended in mid-December, Lucero took a huge step in trying to distinguish himself from being known simply as “the guy from Gaza.” He wanted to find out if his art could survive without being attached to anything else.

Lucero had been working on a design for a T-shirt company, but with all the touring that Gaza had been doing, it had taken over a year to draw and the window to use it had closed. He was left with an intricately designed moth that he was immensely proud of, but nothing to use it for. Oz Yosri, his close friend and bandmate in the local, Southern-tinged death metal band Bird Eater, kept pushing him to make it a print and take it with him on tour.

“Putting it out there as just a piece of art was pretty hard to do,” says Lucero. “I don’t know if I would have done it, but Oz kind of forced me into it and helped make every single print.”

Since time was running short before the tour started, there wasn’t time to get it letterpressed or screen printed like Lucero had hoped. He came up with an idea to make sure every print was original while sticking to the DIY roots honed through years of touring with a metal band.

Lucero used a baking tray filled with French vanilla coffee and dipped each blank page. Depending on how long and how much he left submerged, each one would stain a bit differently. He took the wet paper outside and hung it from a clothesline in the front yard. The pages drip-dried for a bit until Yosri took them down and ironed them flat. They did that five at a time, working all through the night until they had around 100 unique pieces to print on.

The next day, they took the pages to the FedEx print shop. Since the pages were so delicate, each one had to be hand-fed through the roller and, because of that, occasionally a tiny, extra smudge was left here or there, adding a level of uniqueness to each one. Lucero ended up with 89 prints he deemed worthy of taking with him to sell.

“Because we did the work, and it was a pain in the ass to feed them through the machine, it was enough to justify in my head that we didn’t just go to Kinko’s to get them printed,” says Lucero. “It also made it so that I couldn’t smell French Vanilla coffee for like a month without getting sick.”

The prints went over better than he’d hoped. It was enough to give Lucero a few extra bucks each day and show that his work could live as a piece of art without having to rely on a band logo.
Now, he’s focusing on finding a way to make his art a viable source of income while he’s not on the road with the band.

“My life is so wrapped up in touring and playing music that there’s no room for normal-people things,” says Lucero. “I have to find something else in the overall world of art to help sustain living as a musician. Being able to set myself up with something like drawing is the dream, so when I’m at home, I’m a full-time artist and I draw as much and sell as much as I can. Then when I’m on tour, I’m a musician.”

The benchmark for Lucero is someone like Jacob Bannon or Kurt Ballou, both of the band Converge. Bannon is a successful artist in his own right, and Ballou owns and operates a recording studio called God City—where Gaza recorded their current album, No Absolutes in Human Suffering. However, he knows the path to get where those two are isn’t easy or short, as both Bannon and Ballou have been working constantly for over 20 years.

Lucero is focused on “finding something that will feed the art monster” inside of him while he’s home. He’s talked to a few local galleries about being part of a group show or possibly doing one on his own, but right now, he’s focused on the work itself. Each piece takes longer than he’d like, partially because he’d grown accustomed to using a charcoal drawing-sized canvas. He’s trying to rein things in and make his pieces a bit more manageable in order to produce more in the short time he has between tours.

“I’ve been traveling and doing all these awesome things that they’ve kind of ruined a normal structure,” says Lucero. “I’m trying to find something that’s satisfying. What I do is never going to make me rich, but the goal is to sustain myself and not feel like a dirtbag doing it. I want to be happy with what I create and where it has put me.”

You can find more of Anthony Lucero’s work at thegoddamned.tumblr.com, or shoot him an email at gazaeater@yahoo.com.