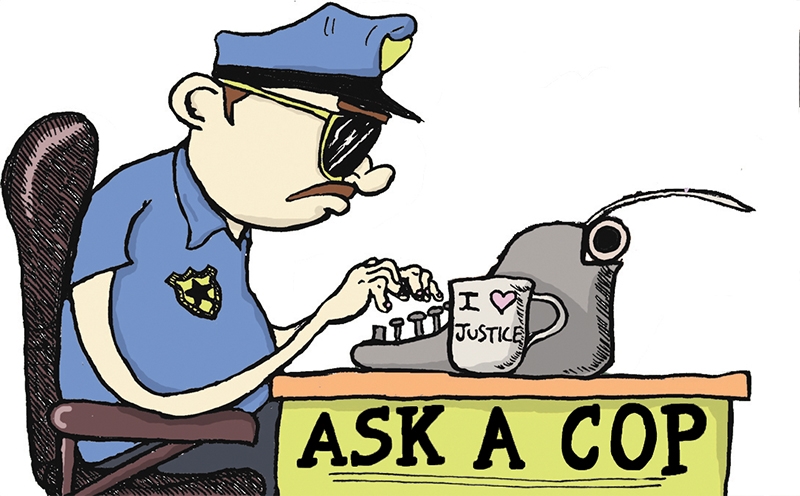 Dear Copper;
Much like 2/3 of the city, we’ve got a homeless problem. There’s a guy we’re calling The Prospector squatting in a parking lot next to our place. He’s a dumpster diver, laundry thief, door and window checker, possible drug holder and been caught breaking into cars to sleep overnight. He’s had the cops called on him several times and never hauled off, the owner’s of the parking lot won’t toss his shanty duplex out for fear he’ll break their windows, and moving isn’t an option for us right now. What can the cops do to help us, and others in our kind of situation out?
Love;
Bat-Wielding Couple

Dear Bat Team:
Just the other day I watched a bum at 210 Rio Grande take a dump right on the sidewalk. Only your stick will de-motivate this disrespectful piece of trash from doing that in your yard.

Several actions or inactions have greatly exacerbated the bum problem in Salt Lake County. I don’t want to call criminals homeless. Homeless are people and families who have lost their homes. They’re using legit homeless services to get back on their feet. They’re respectful and law abiding, go to work each day, and their numbers aren’t huge. Ask these legit homeless what they think about living around all the bums you describe above. Their horror stories are way worse than ours.

I’m referring to the street trash who live and breathe as self-induced substance abusers with resulting mental illness. Yes, real mentally ill people do end up on the street. However, go hang out among the folks down by the shelters, and you’ll quickly see that they are few and the criminal trash are many.

The courts in Utah have ruled it free speech for the bums to stand in a public place with signs begging for money. I can’t think of anything, except for maybe open-air market drug dealing, that diminishes the quality of life more. Ask all the ex-patrons of the Gateway Mall or its movie theater about bums and their signs. They’ve gladly switched to City Creek and other theaters.

Every time you give a bum money, you are perpetuating drug dealing, drug and alcohol abuse, robberies and theft. The bleeding hearts are actually causing people to be victims of violent crime and are assisting a heroin addict to get high. Please, use the homeless meter or donate money directly to the shelters as it will go to the legit homeless.

What can the cops do? What their administration tells them to do. In April 2013, drug dealing among the street people was so bad, the SLCPD was going to double their efforts to stop the illegal activity. However, in September 2013, it was actually worse and even the coppers called it close to out of control. In response to the drug dealing being “out of control,” the PD Administration decided to “reboot” the initial “doubling.” If you go watch the shelter area and Pioneer Park today, even after the reboot of the doubling, you’ll see an open-air drug market. However, SLC’s Top Cop, Chris Burbank, has come up with a plan that no doubt will finally solve the drug-dealing problem. It’s called “Knock It Off.”

When it comes to enforcing drug dealing laws, the SLCPD suffers from Multiple Drug-Dealing Policy Disorder. Until the Top Cop decides to enforce the law, or telling the dealers to “Knock It Off” actually works, the area will continue to decline with legit homeless and heroin addicts suffering the most. Make moving an option to get as far away from the bum epicenter as you can get, or relocate to a city that won’t tolerate illicit bum activity.