There are a couple of corners in our beloved Salt Lake that are riddled with some of the most incredibly obvious substance transactions I have ever seen. These corners—specifically, the corner of 200 S. and 400 W.—often see squad cars cruise past, but rarely does anyone get busted.

Ask A Cop: Dealing With Dealers 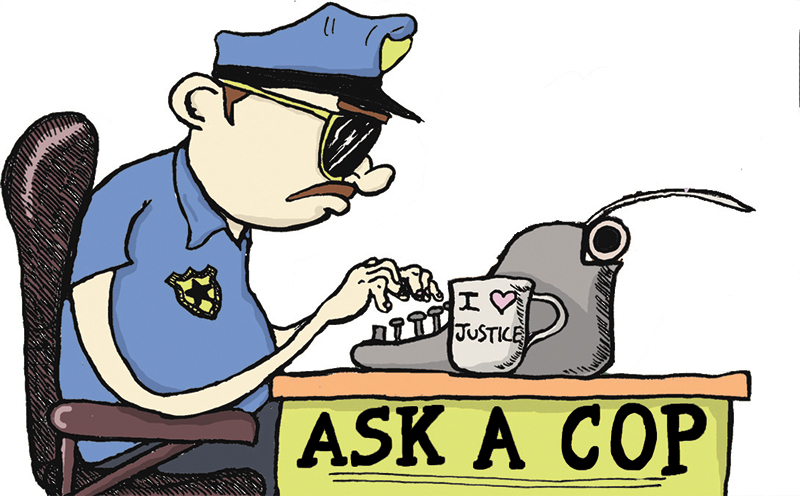 Illustration: Steve Thueson
Dearest Officer,
There are a couple of corners in our beloved Salt Lake that are riddled with some of the most incredibly obvious substance transactions I have ever seen. These corners—specifically, the corner of 200 S. and 400 W.—often see squad cars cruise past, but rarely does anyone get busted. I’m not for an increased police presence anywhere, but if you’re passing what is an obvious deal, isn’t it your OBLIGATION to stop it?! I swear to god I’ve seen cops make eye contact with these scumbags who, when they’re not exchanging smack for cash, make it their life’s mission to make any female—no matter how tough—feel vulnerable. My question, ultimately, is why don’t you guys do your fucking jobs instead of using taxpayer money to drive over the speed limit past low-level drug dealers? This is not to say every weirdo should be put away, and I know you’re not the person to talk to about systemic failings, but Jesus, it’s as if you’re encouraging these guys.
ACAB.
Dearest ACAB,
I’d apologize, but it’s not my place. Before continuing, reread The Huffington Post article from Oct. 30, 2013. In the article, the Chief law enforcement officer over the address you detailed promoted the idea of “just knock it off” with drug dealers. You also have a DA who doesn’t put dealers in jail. Early resolution puts the dealer right back on the streets you walk. Those bosses would disagree with my assessment, but then again, they’re not on the streets like you and me.
Almost a year ago, when the article was printed, this strategy had already been in place for some time. You have seen the complete failure that has resulted in a criminal street pharmacy. Once thriving businesses are now vacant and drug infested. Children and families trying to use the services of the shelter are continual victims—overdoses, homicides … I could go on for hours.
How did “knock it off” affect cops in Utah? Well, when I go on a felony drug call, I’m forced to tell the dealer to only knock it off. How’s that criminal going to react the next day when I arrive to arrest him, because now he beat up a competitor? He’s in my face, “Fuck you, pig,” with a complete lack of respect for a peace officer’s authority. As you put it, the cop is going to do his fucking job, and the fight is on—people get tased, sprayed, cops get shot, people get shot—it’s a vicious circle. The result: dead cops and dead druggies. I’m generalizing, but you get the idea.
Police admin know of their failure. Stories in other states promoting the SLC drug area and profits to be made have gotten back to City Council, which has demanded change. Continue to voice your concern with the “systemic” problems. Understand that those implementing the change are the same who promoted the open-air drug market in the first place. The SLC narc unit was disbanded. A new unit, with new people, is gearing up to reclaim the area, and a couple street cops were consulted. That’s different than before. There’s hope, but don’t hold your breath. When those in charge offer you an apology, rest assured, we’re no longer encouraging the bad guys.
Photos: