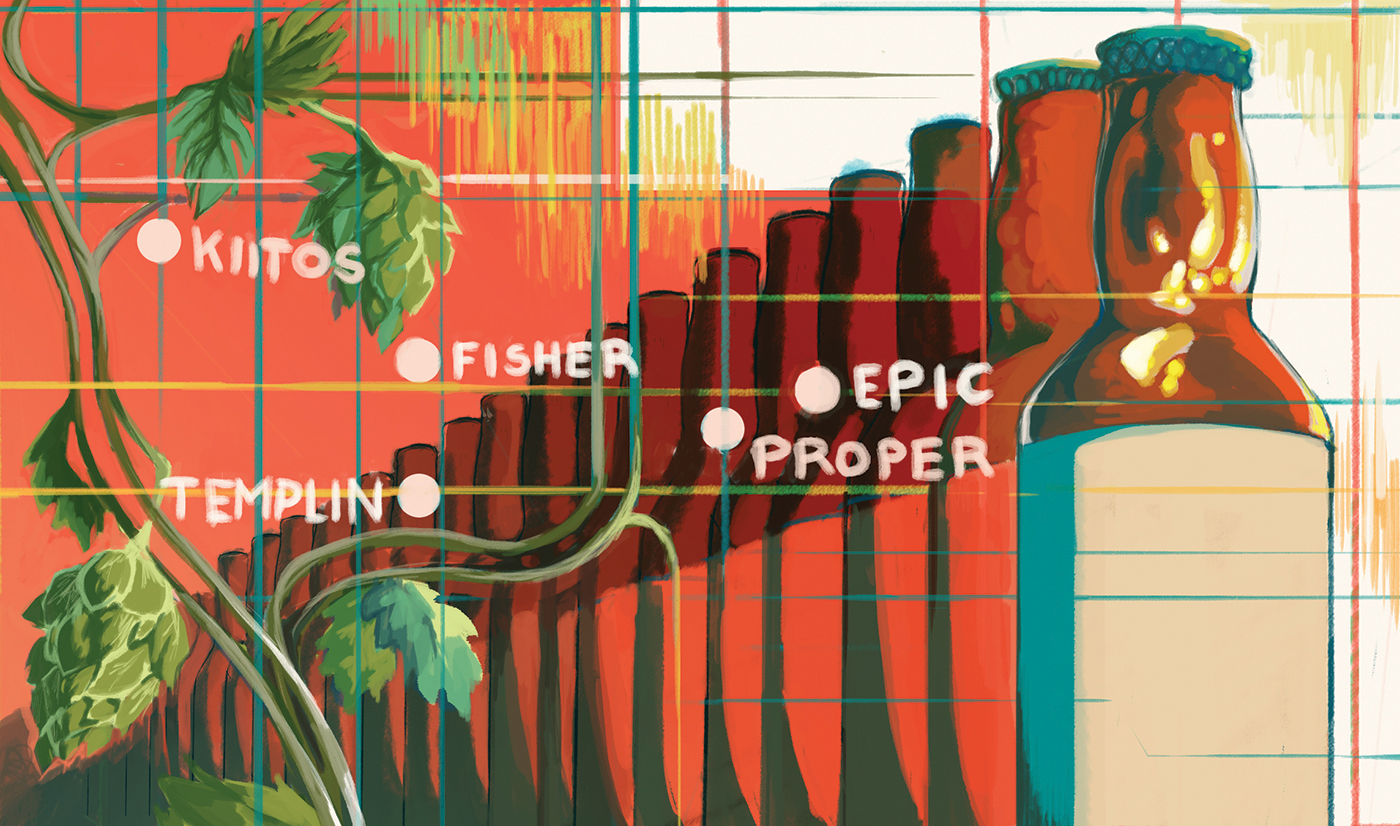 Taking a “beercation” is a heck of a lot of fun! We’ve traveled to some of the best areas in the United States for beer, and we know the value of having numerous breweries in a given vicinity. First, who doesn’t love the ability to walk from brewery to brewery? It’s just plain fun to check out ample amounts of frothy goodness. And it’s generally a safer experience because you’re not getting behind the wheel. One of the greatest cities we have visited is Fort Collins, Colorado, because it fits this mold—a ton of excellent beer all within striking distance of each other.

This brings us to an area of Salt Lake City that is quickly on its way to becoming our golden row. The 1.3-mile route between Epic Brewing Company and Kiitos Brewing is full of some of our state’s best beer and places to hang out and grab a pint. According to Google Maps, to hit all the listed breweries, it should only be about a 26-minute walk. However, there is a good chance you won’t be walking it—you might get stuck at a favorite along the way. Or, if you need to hail a ride, the price of a rideshare should be reasonable.

Selection: Epic Brewing has an all-star selection of premium beer. Their selection ranges from classic lagers to killer IPAs—and, of course, one of the most consistent barrel-aging programs producing highly sought-after sours and stouts. You can get all of these in their cozy taproom or take some from the to-go cold cases.

Special Events: Every week, Epic drops a new high-point growler. These beers are usually a specialty brew or a cool variation of a classic beer. You’ll want to bring in your own growler to save on the extra cost of replacing it.

Try this Beer: Big Bad Baptist (and all its variants), the Brainless Series and the recently released 500-calorie Super IPA Me.

Selection: Proper Brewing excels in myriad different styles of beer. They are usually one of the first to brew a beer from the depths of the oldest recipe books. And while they brew within purist traditions, they also came along for the trendy hazy/juicy IPA ride.

Special Events: Trivia hosted by The Trivia Factory every Tuesday night, and Wednesday’s Karaoke That Doesn’t Suck doesn’t suck! Pair these with the assortment of games and a bite from Proper Burger, and you have a great night out.

Selection: This family-owned and -operated brewery is a great place to grab old-school, German-influenced beer. With plenty of lagers and ales on tap, there is sure to be something for everyone. Besides, there is something crazy satisfying drinking from a tall-ass, 0,5L T.F. glass.

Special Events: Hosting a variety of food trucks, this is a wonderful place to experience great beer and tasty food. Wednesday night is game night hosted by Ales and Allies once social-distancing ends. It’s become a popular draw, bringing in the crowds.

Try this Beer: We drink a ton of Granary Kellerbier because it’s great! Ferda IPA is a standout. If you plan well, you show up on a special-release day.

Selection: Fisher Brewing specializes in its ever-rotating beer on tap. They also feature a few high-point beers to take with you. It’s a fun atmosphere that reminds us of many breweries we have visited out of state.

Special Events: Fisher is a happening place! The only time this place doesn’t seem to be filled with patrons is the first thing when the doors open. If you are looking for a social hot spot, look no further. Another leader in symbiotic relationships with the food-truck nation, there are plenty of refreshing brews and nummy eats.

Try this Beer: You must try the Fisher Beer, but it’s not always available because of its popularity. If it’s there, grab it. Otherwise, any of the rotating pale ales featuring different hop blends.

Selection: Kiitos is the place to find everything. Always keeping up with the latest trends in the craft beer world is a specialty for this last stop on the tour. Crisp and refreshing pilsners are seated right next to unfiltered hoppy beer and any kettle sour in between.

Special Events: Kiitos’ taproom is boarded by more than a few pinball machines. You can grab a great beer and try your hand at getting the top score. Seating is great, as it allows you to interact easily with your group.

This condensed section of Salt Lake City’s craft beer scene houses some of our state’s greatest breweries. You will enjoy the great selection of high-quality beer at each location. In addition, many have great entertainment options and awesome food. As of now, this 1.3 miles, or a brisk 26-minute walk, is one of our treasured, jam-packed beer pathways. Next up is the rapidly growing area of Grid City Beer Works to Level Crossing Brewing Co. Happy beer-hunting!