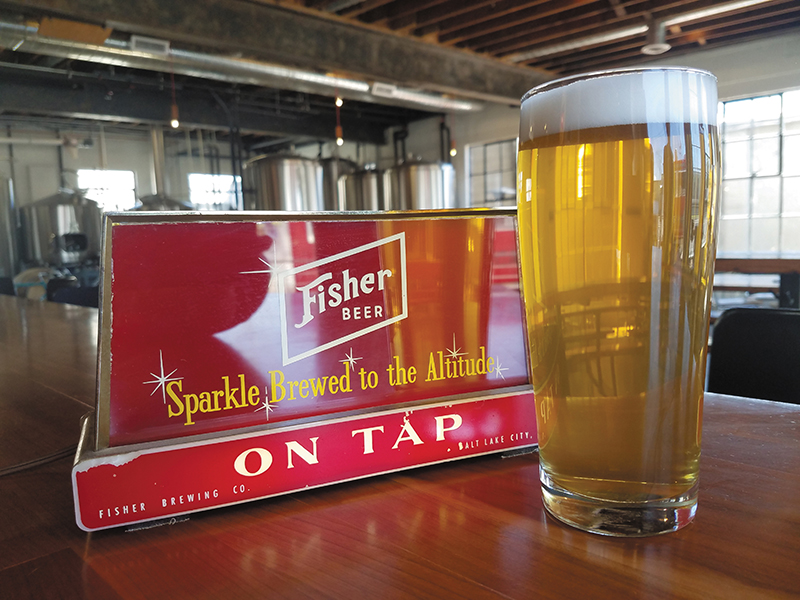 In 1884, a beer brewer by the name of Albert Fisher immigrated from Germany to Salt Lake City. About a decade after setting up roots here, Fisher purchased 15 acres of land on 200 South on the east bank of the Jordan River and established the A. Fisher Brewing Company. Fisher’s brewery quickly became the largest brewery in Utah and one of the largest in the West. Fisher’s brewery thrived—it even survived the dark days of prohibition, and it continued to operate until the early 1960s when it was bought out by Lucky Lager Brewing. Now, 132 years later, four men—Steven Brown, Tim Dwyer, Colby Frazier and Tommy Fisher Riemondy, is one of Fisher’s descendants—recently resurrected Utah’s most historically successful brewery. The new Fisher Brewing is located about a mile away from the original brewery, in the Granary District of Salt Lake. There, the reborn brewery makes all kinds of beers that Fisher’s original brewery couldn’t even conceive of, like a red beet saison beer. One beer that Fisher’s new pilots will always keep the same is their Classic American Lager. This is the tribute beer that pays homage to the lagers that Fisher built his empire on. The beer has proven to be so popular that they have already had to buy bigger fermenters to keep it from running out. So what’s so special about it?

Description: This American interpretation of a German pilsner pours a lightly hazy, golden-straw color with a nice amount of streaming carbonation that builds up a two-finger, dense, white head. The head retention on this beer is quite strong—the foam creates soapy-looking tendrils of lace that cling down the glass, but it eventually reduces to a nice, thin cap that lasts until the glass is empty. The nose comprises aromas of lemon zest, pear, pepper, apple, cracker, bread, earth, florals, grass and herbal spiciness. It’s complex but fairly mild. The taste starts off similarly to the nose with a bit of lemon zest and pear-like notes. Next comes a bit of peppery yeast and ghostly apple flavors. Cracker flavors from the malt begin to show their dominance midway through the palate, rounding out the previous yeasty notes. Toward the end, the hops begin to take over with flavors akin to grassy flowers, light pine and herbal spices. The finish is lightly grassy and mostly dry, with zero cloying flavors present.

Overview: There are some nice flavor combinations here. There’s a complexity and balance of malt and hop flavors that are subtle but still provide a bit of excitement on the tongue. The carbonation is medium-high and light bodied, with a smooth, crisp and lightly tickling mouthfeel. The light alcohol is well hidden, with zero warming effects. This is a good pilsner-style lager. It’s not a clone of the original Fisher lager, but it’s a good approximation of what that beer would have resembled both in look, taste and aroma. For now, the Fisher Classic Lager is only available at the brewery, located at 320 W. 800 S. in Salt Lake City. Fisher does offer “crowlers,” though. These are a 32-ounce canned growlers that are filled and packaged on demand from the brewery’s tap handles. It’s a little bit of local history in every glass. Prost!