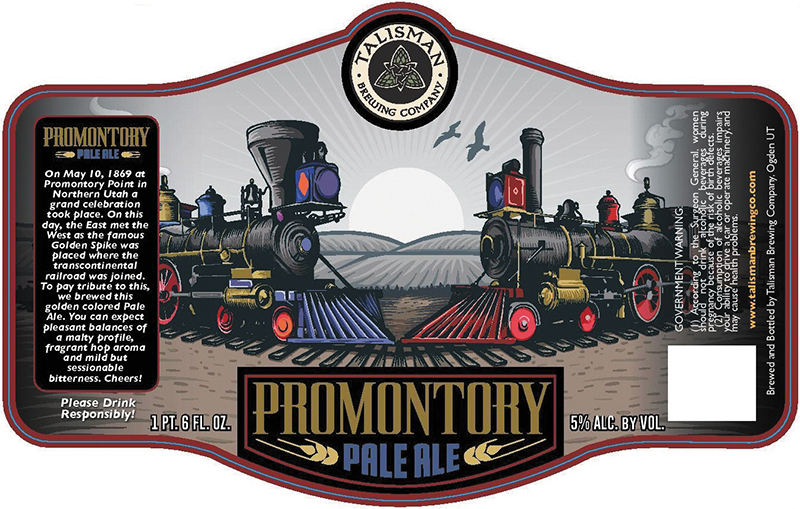 Another new brewery has taken root along the Wasatch Front. It took the mantle away from Proper Brewing Company, which was only able to claim the title of newest Utah brewery for about a week. The King is dead—long live the King! Our newest brewery hails from Ogden, which is no stranger to craft beer. The city of Ogden was developing their own craft beer movement way back in the mid-’90s when breweries such as Naisbitt’s, Ebenezer’s, Mount Olympus and Ruby River served the northern Wasatch Front. Roosters Brewing Company was the only brewpub to thrive through the years, and now, they finally have company once again in Ogden’s craft beer clubhouse.

Talisman Brewing Company is the result of a lot of hard work from owners Dusty and Joann Williams. Their love of beer stretches beyond their roots of homebrewing in their kitchen. After years in the planning stages, they finally managed to open their dream project last month, debuting with six bottled beers that are already exploding onto Utah’s craft beer scene. Given that Talisman has six beers out and I only have room for one on this page, I’ve opted to take my privilege as head beer dork and go with my favorite: the Promontory Pale Ale.

Description: Pale ales are a wonderfully simple ale, and I guess that that’s what explains their global appeal. This beer reminds me of a throwback to my burgeoning beer gnerd days of the ’90s. Promontory Pale Ale has a textbook look with a deep amber color, suggesting that there are some toasted and roasted malts. The brew froths up a tight head of white foam, which boasts a formidable staying power. The head creates fine foam lacing that coats the entire glass to the finish.

Promontory has that “old-school” nose to it. This is no IPA. The aroma has a kick of dank pine needles with a barely noticeable hint of vague citrus peel. It reminds me of many Cascade-hopped beers from my past.

The taste starts with an overabundance of toast. However, the aforementioned dankness from the hops mellow out the dryness, lessening the impact. Instead of dry, bland toast, there’s a simplified flavor, similar to Sam Adams’ Pale Ale. Suddenly, the hops explode and make their presence known with a dramatic hop bitterness. Specifically, there is a slight resinous/hop-oily taste with a touch of leather. Chasing the hop profile, I noticed that deep down, there are some butterscotch and caramel notes that were hidden at the beginning beneath the toasty elements. This American-style pale ale tends to lean more toward the hoppy side of the spectrum than the malty side, but the flavor profile is generally well-balanced.

The body of this beer is firmly in the medium range. It still retains the light, hoppy slickness that keeps the beer’s profile quite enjoyable. The finish is malty and sweet before it dries somewhat. The beer is crisp, relatively clean and refreshing.

Overall: The hoppy notes are really the first things that hit you in this beer, but it isn’t a huge hop bomb—I’d guess that the IBUs (International Bittering Units) are less than 40. It’s a hop-forward pale ale that doesn’t go overboard, and it definitely doesn’t stray into IPA territory. It’s no secret as to why this formula for Cascade Hop–driven pale ales has been around since the mid-’80s. This isn’t a complex beer by any means, but it’s not so light that it’s dull and uninteresting. For hop heads, this may be a little too subtle, but for true fans of the classic, old-school pale ale, there will be little disappointment. Consider enjoying Talisman’s Promontory Pale Ale with buffalo wings, sushi or barbeque. It’s available now at the brewery, located at 1258 Gibson Ave. in Ogden, or at better beer bars along the northern Wasatch Front.