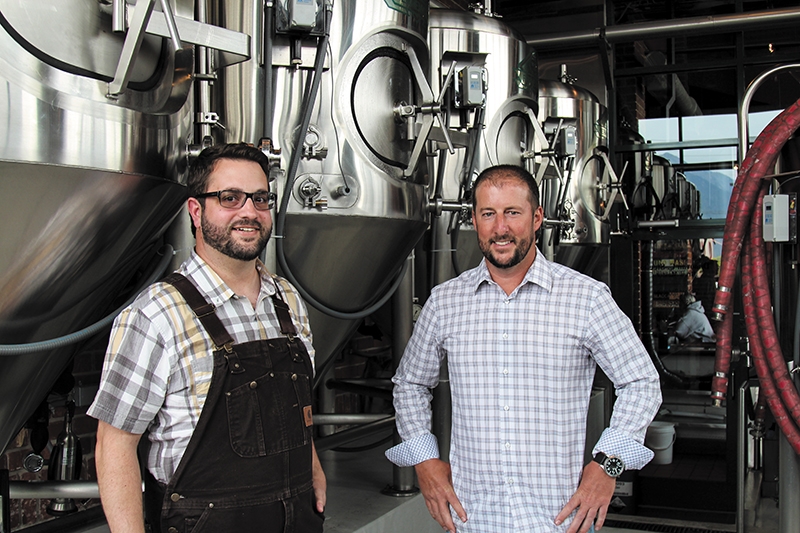 Photo: John Barkiple
Buying a brewpub and hitting a hole in one in golf are each difficult feats—so is winning a million dollars. Hoppers Grill & Brewing Co. owner Jason Hargett has done all three. Five years ago, Hargett won 1 million dollars in a hole-in-one contest held by Hole In One International. This enabled him, along with his brother and co-owner, Brandon Hargett, to purchase Hoppers from its erstwhile corporate owners, Sizzling Platter (Dunkin’ Donuts, Little Caesars, Sizzler, Red Robin), “in a roundabout way,” he says. “We were able to leverage that with Zions Bank to where we didn’t have to go out and get investors.” As of May 19, 2014, Hoppers became locally owned, and Jason and Hoppers Brewermaster Donovan Steele have since been broadening the brewpub’s horizons.
Steele was content working for Hoppers under Sizzling Platter, but Jason’s acquisition of the brewpub has bolstered the “brew” aspect of their identity. “The focus was more on the restaurant, and now I think we’re moving toward bringing more emphasis on the beer and incorporating more of the beer into what we do,” says Steele. “I would say we have a little more freedom now to create [with] some new beer styles.” Case in point: When I first came to Hoppers, their New Zealand draught (made with lager yeast) was their seasonal brew. About a month later, I saw it on the permanent roster alongside the Orange Honey Wheat, Uno Mas…, This is the Pilsner, Pale Morning Ale, Red Ale, Madame X Stout and the Irish Baghandler and Blackened Tan beer blends. “Some seasonals have gone extremely well, [and] have gone on to that permanent [spot],” Jason says.
Former Hoppers Brewmaster Tim Barr passed the brewmaster torch to Kevin Ely (now Uinta’s Head Brewer) in 2003, shortly after Steele joined the team, and Ely passed it to Steele in 2007. Steele maintains a legacy of masterful brewing with Hoppers: They have won 36 medals since 1999, and Steele has spearheaded 19 of them, including three gold medals and one bronze medal from the Great American Beer Festival (GABF). They’re not easy to come by. “Our most medal-winning beer is [the] pilsner: This is the Pilsner,” he says. “Helles Fest Bier was a seasonal—it’s still kind of a seasonal. We bring it back for festivals. It took gold at GABF and a silver last year at the North American Beer Awards … It’s really popular, and once we put it on tap, it goes quick.” Each Hoppers seasonal lasts only about two to four weeks, and they swap one out per month. “With anyone that comes into the brewery [who] are true brewery fans, they’re always gonna ask, ‘What’s your seasonal?’” Jason says. Seasonal brews constitute Hoppers’ list of new beers—Steele says, “We’re always working on some new seasonals coming up.”

Hoppers is also working on reintroducing draft and bottle distribution. They’re planning to get drafts and tap handles in the four Ruby River Steakhouses in Utah in the next few months, and aim to get drafts in local bastions of beer culture such as The Bayou, The Beerhive Pub and Avenues Proper. Regarding bottling, “It’s definitely a goal, for sure,” Jason says. He speculates that eventually, Hoppers high-point beers will hit state liquor stores in the ballpark of about one year, depending on the success of their draft distribution—they’re also looking at appropriate bottling equipment. Hoppers’ previous bottled beers have also earned them accolades: “We used to bottle and make an Oktoberfest Märzen,” Steele says. “That did really well, too. It also won a gold at GABF.”