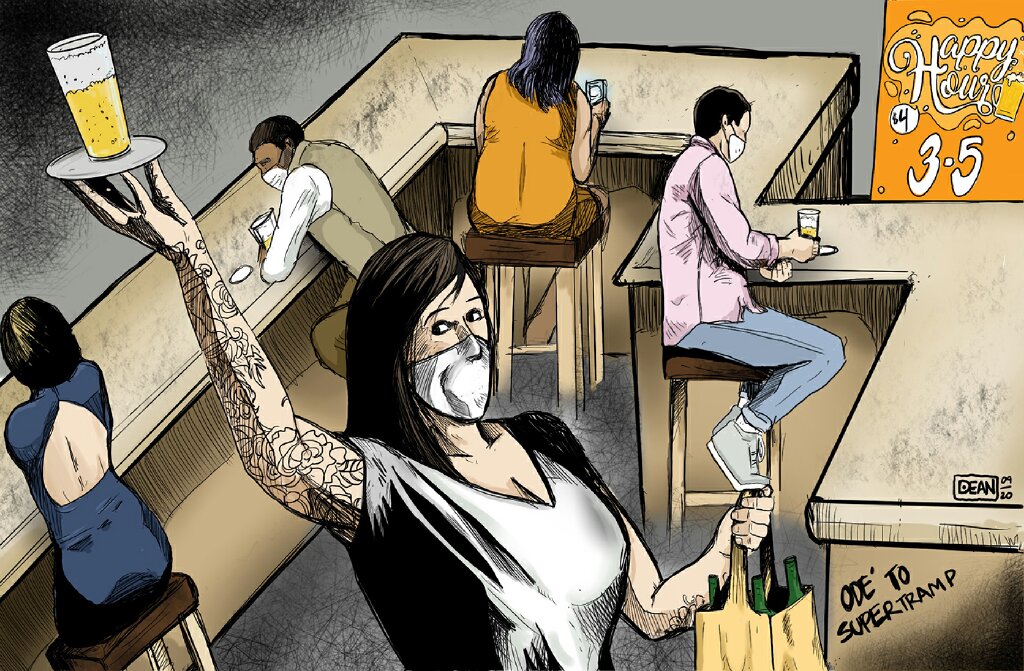 #SAVEUTAHBARS: Change the Laws, Save the Bars

The Salt Lake City bar scene is constantly shifting, growing and sparring with a complex history of restrictive policies. It’s true: Owning and operating a bar while navigating legislative hurdles is an immense challenge. However, as business owners Katy Willis and Michael Eccleston of Quarters Arcade Bar and Sean Neves of Water Witch Bar are well aware, local bars continue to enliven Utah with social, cultural and economic vitality. Restrictions have long been fuel for the rampant creativity that is characteristic of SLC cocktails, brews and spirits. Now, as the pandemic continues to put additional financial pressure on the service industry, Willis and Neves have created the #SAVEUTAHBARS initiative, a restriction-lifting plan to, in Willis’ and Eccleston’s own words, help bars continue to be “the stewards of a good time.”

At the core of #SAVEUTAHBARS is a petition jointly drafted by Willis, Neves and other business owners. “We created the petition to make noise and get attention,” says Neves, who has been working on bar-related legislative initiatives for several years. The petition and the accompanying policy letter feature key action items that Willis and Eccleston say “will provide the quickest financial return and give a lifeline to businesses that are struggling in the immediate term.”

The first of the two critical items addresses Governor Gary Herbert directly and requests an executive order to allow bars to “sell cocktails in sealed containers” for to-go availability. During the pandemic, the inability to sell drinks to-go severely limits the revenue stream of restaurants and bars. The petition suggests that drinks could be “sealed with heat shrink, put in a bag and transported home for safe consumption” as a proactive response to the obvious concerns that arise regarding drinking and driving.

“We created the petition to make noise and get attention.”

Next, the petition calls for those in possession of a liquor license to be granted the right to purchase wholesale alcohol. Currently, according to the petition, “most industries purchase their goods from wholesalers at reduced pricing,” while alcohol must be purchased directly from the state at full retail price. Utah is the only state in which bars and restaurants do not have access to wholesale pricing. With an already-thin profit margin due to numerous other restrictions, this proposed change is considered “essential to the immediate survival of the industry.”

In addition to the primary requests of the petition, which has been signed by almost 10,000 people at the time of writing, several other proposed changes are also endorsed. These are described as “necessary to ensure the long-term recovery of the food and beverage industry in Utah,” and would greatly ease the Utah-specific strain that is currently imposed upon liquor licensees. By including these additional changes in the petition, the initiative hopes to inform law makers about the on-the-ground impacts of alcohol laws in Utah. “It all comes down to education,” says Neves. “Many legislators are surprised to hear about the actual impact of our regulatory framework.”

For those unfamiliar with Utah’s uniquely severe alcohol restrictions, the #SAVEUTAHBARS initiative contains a wealth of concerning information. For example, in Utah, drinks must be “dispensed from metered devices such as ‘Bergs’ or other clicker systems.” Jiggers, the mostly universal tool for determining the appropriate volume of alcohol to serve, are only allowed for “flavoring.” Allowing jiggers, the policy letter argues, would result in numerous benefits including decreased overhead for bars. Metered systems are expensive to purchase and maintain, and they’re also known to frequently over- or under-pour.

Other Utah-specific alcohol did-you-knows: Happy hour drink specials are illegal—specials can only be offered for a full day. “Batched” cocktails aren’t allowed either, and bars have to add alcohol to each individual drink as it is ordered—even though “batch cocktails exist as a commonplace culinary tool in the modern cocktail movement,” as the policy letter states. At restaurants, patrons are currently required to be seated at all times when in possession of an alcoholic beverage. Be cautious while making a toast during your next celebratory night out—that “cheers” becomes illegal the moment your butt leaves your chair. All of the restrictions mentioned in the letter are considered impractical and anti-business by the creators of the initiative.

“Many legislators are surprised to hear about the actual impact of our regulatory framework.”

“There shouldn’t be moral, non-public health related barriers to our ability to thrive as business owners in our community,” say Willis and Eccleston.

Some might assume that all of Utah’s strict alcohol codes are remnants of a bygone era, but that is not the case. In 2018, the state increased population quotas that determine how many bars are allowed to exist per human population, effectively reducing the number of available licenses by nearly 30%. The petition states that a “massive backlog” of bar license applicants was created in the process. Iron-fisted alcohol rules aren’t just problematic for existing establishments—the path to becoming a viable alcohol-serving business in Utah is riddled with hoops.

For bar owners and longtime service-industry workers like Willis, Eccleston and Neves, it has been painful to experience their “entire industry be decimated and left for dead” during the pandemic. #SAVEUTAHBARS is a timely movement to make the necessary changes and preserve a burgeoning and economically important industry. Whether we choose to partake or not, Utah residents benefit from a deep well of thriving bars and restaurants.

“As business owners, we are all skilled problem solvers,” say Willis and Eccleston, “sometimes the best option is to change the law.”