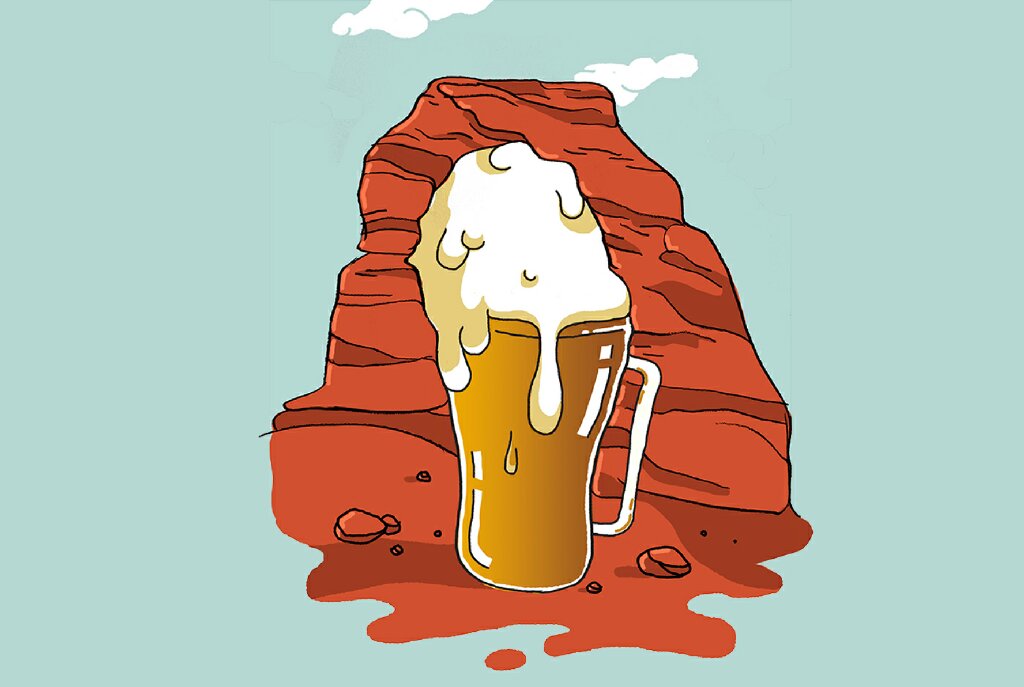 If finding a good brew outside of the Salt Lake metro area is a challenge, Strap Tank Brewery of Springville, and Zion Brewery at the mouth of Zion National Park in Springdale, have the solution. Both Strap Tank and Zion Brewery have been paving the way as bastions of good brews in their respective towns. Their successes prove that the thirst for beer in Utah is real, as both breweries expanded to second locations in 2020: the Silicon Slopes of Lehi for Strap Tank and St. George for Zion Brewery.

Derik DeBoard, Head Brewer at Strap Tank Brewery’s Lehi location, is new to his role but is no stranger to brewing. After leaving the military 10 years ago, DeBoard has immersed himself in brewing culture, having worked for Uinta Brewery and the Utah Brewers Co-Operative for Squatters and Wasatch Brewery. “For me, moving into the leadership position was quite easy,” he says. “I’ve been moved into these types of positions often and I was ready for the challenge. I want to focus on bringing more customers into the two Strap Tank locations with new and exciting beer.” Along with Julia Shuler, Lead Brewer of Strap Tank’s Springville location, DeBoard plans on expanding on Strap Tank’s already diverse menu of brews, which currently includes the popular Pineapple Hopsicle, a hazy pale ale brewed with Sabro hops and pineapple, and the HotRod, a roasted–green chile twist on a Mexican-style lager.

The Springville location of Strap Tank Brewery shares a parking lot and an affinity for motorcycle culture with Legends Motorcycles Museum, drawing in a mix of locals and motorcycle enthusiasts looking for an exceptional gastropub experience. For DeBoard, the newly established Lehi location has a similar draw as a unique, standalone brewery in the quickly growing Silicon Slopes area.

“I want to focus on bringing more customers into the two Strap Tank locations with new and exciting beer.”

“The experience is actually quite different between the two locations,” DeBoard says. “Each of the restaurants do different food specials daily. Springville is set up nicely for a cooler patio environment and specializes more on the kettle sour styles of beer. Lehi has a fantastic upstairs patio to overlook Utah County and tends to do more lager and fruited styles of beer.”

Farther down south, Zion Brewery has been operating at the mouth of Zion National Park since 2008, giving tourists and locals a place to gather and drink a local beer after a day of hitting the trails. “We get to work in one of the most beautiful places in the world, so I think that is an advantage,” says Cris Pace, Owner and Manager of Zion Brewery since 2012. For Pace, the success has come from the great feedback, atmosphere and events such as the Zion Canyon Beer Festival in 2019. Presented by Zion Brewery and featuring 10 breweries from around the state, all of the festival’s proceeds went to the Zion Forever Project, winning over tourists and locals alike. For Pace, having the strong relationship and proximity to Zion National Park has made Zion Brewery a destination in itself.

“I think part of traveling, for a lot of people, includes a stop at the local pub,” he says. “Although Springdale has always had some amazing restaurants, we have given them a place to grab a beer after or before a hike.” With locally sourced ingredients and live music, Zion Brewery has become an oasis of nightlife near Zion National Park.

“We get to work in one of the most beautiful places in the world, so I think that is an advantage.”

Zion Brewery’s success in Springdale has led to the expansion of a multi-floor, microbrew experience in St. George.    “We had always been looking to have a second location in St. George. When we found out the city was looking to sell the old fire station, we jumped at the chance,” says Pace. The St. George location, known as Station II, is located at 142 N. Main St. and features a patio, game room, lounge and bar. Open 4–11 p.m. daily, Station II doesn’t serve food (unlike the Springdale location), but there will be plenty of activities and food trucks while still providing the same excellent beer, such as the seasonal Foray Pomegranate and the ever-popular Juicy IPA. Judging by Station II’s overwhelmingly positive reviews, the presence of a microbrew hangout in St. George is long overdue.

The successes and expansions for both Strap Tank Brewery and Zion Brewery prove that the demand for good craft beers exist outside of Salt Lake City. For Pace, breaking the mold for breweries in both Springdale and St. George is all part of an imminent perception shift. “We do have a large community of non-drinkers, but we also have a lot of beer enthusiasts and tourists,” he says. “We are providing a service for them that they enjoy, and, over time, the perception will change.”    The new Lehi location is located at 3661 N. Outlet Pkwy. (near the outlets at Traverse Mountain) and is open 11 a.m.–10 p.m. weekdays, 11 a.m.–11 p.m. Friday and Saturday, and 10 a.m.–9 p.m. on Sundays. Both locations feature eight core beers, four seasonal/brewer’s choices and a line of sodas catering to beer aficionados and non-drinkers alike. Both Strap Tank Brewery’s and Zion Brewery’s respective successes in Springville, Lehi, Springdale and St. George have challenged the notion that Utah, as a state, is strictly for teetotalers.