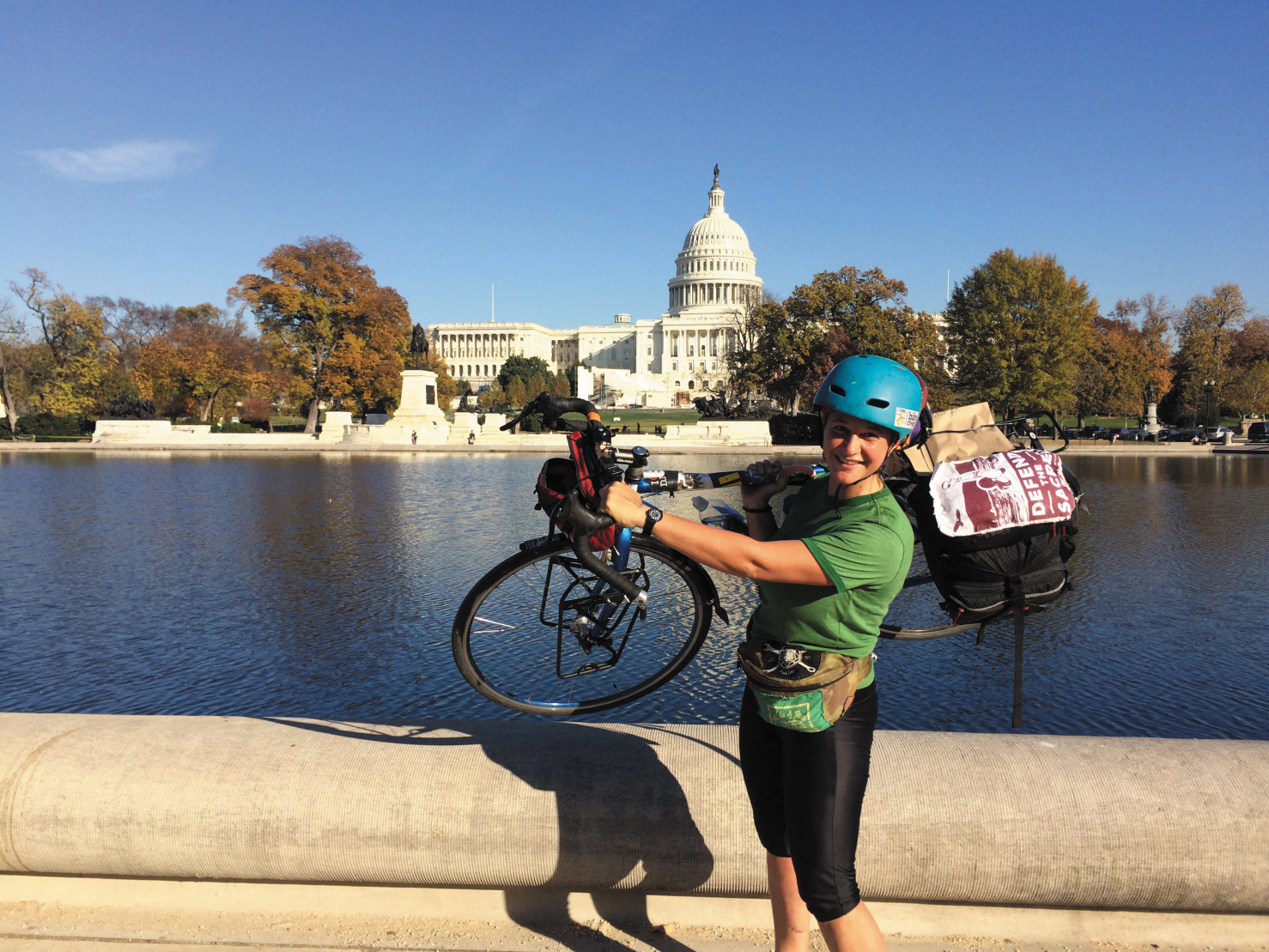 Erika Longino has fungus on the brain. “When I bike, I keep one eye to the road to make sure no cars are getting too close,” she says. “The other eye is looking to the forest for little, wild edibles. Lion’s mane, puffballs and oyster mushrooms just come out of the woodwork.”

Sometimes you just want to hop on a bike and hit the road. If you’re Erika, you ride for over six months, connecting mushrooms, bikes, environmental activism and Mardi Gras in a glittering cycle of life and death, growth and decay. It makes for quite a different bike tour.

Erika set out from Salt Lake in September, aiming to visit food co-ops around the country before returning home to start one. I called her while she was relaxing in New Orleans, gardening at a squat in the 9th Ward. She’s a young woman with bright round eyes and an infectious smile, solidly built, tan from farming and biking, with an ever-changing spiky spray of hair. She acknowledges that she’s not your average long-distance bicyclist. But she maintains that biking is queer, femme and relevant as hell.

“Being on a bicycle in a world that’s made for cars, you’re given a space that’s off on the shoulder,” she says. “You’re smaller, vulnerable and have to deal with more dangers. But at the same time, you get to experience things in a really vibrant way. You get to claim your space.” Not unlike being a woman in a male-dominated society, it can be uncomfortable, especially when biking alone through rural towns. “People are looking at you like you’re completely crazy, asking who your husband is. It drains you after a while.” But between the catcalls and misunderstandings is where the real change happens. When you are out of your element, people see you in a different light, and you can connect with them and represent your ideas. Strangers routinely let Erika into their lives, fed her, helped her. She calls these moments “bike-tour magic.”

In the course of three months, she made it from SLC to Detroit, to NYC, and down to Pittsburgh, camping and staying with hosts from Couchsurfing or Warmshowers. She rode with two friends over the Rockies to Denver and throughout the trip would travel with others, old and new. She stopped along the way at Bike!Bike!, an international summit for DIY bicycle spaces like the Salt Lake Bicycle Collective, where you might have met Erika working as the shop manager in the past two years; and Bike Kill in Brooklyn, a chaotic freak-bike destruction derby that happens on Halloween. It’s a brutal event filled with giddy revelry and twisted metal as people crash welded contraptions into one another. On a trip about food sources, breaking bikes wasn’t a diversion—it was part of the cycle.

“It’s all a process of destruction in order to emerge on the other side,” Erika says. “There’s always this dynamic of growth and decay—this darkness to things, out of which sprouts life and new growth.” Erika talks in ecosystem metaphors a lot, which fit right in at the Radical Mycology Convergence in upstate New York, where, halfway through her trip, she joined 300 other mushroom nerds in the forest. “I feel like that’s really the ethos of mycology: Take things that are decomposing or dying and then convert them into things that are productive and light and non-toxic.”

She dishes out a bit of mushroom theory: The majority of a mushroom is mycelium, the mushroom’s roots. The ten percent that we can see and eat is called a fruiting body. When you pull apart an old stump, the mycelium are the hair-like, white crystals running amok, decomposing the wood. “That’s what connects the entire forest, and the entire underground of the world,” she says. “When there’s a spot that’s conducive to reproduce, then they put up little fruiting bodies, and that’s what you see when you see mushrooms.”

The quiet, daily work of riding a bike across the country is Erika’s mycelial journey—solo touring, spending days on end in her own head. “You see all that, and not just outer landscapes. You get to see what’s on the inside of your own head and your own struggle, and you kind of get to figure out what’s going on.”

Erika biked against the frustrating backdrop of American politics. The rural landscape was dotted in Trump/Pence signs. After months of hearing about it, she followed her heart and jumped aboard a caravan to the pipeline protests around Standing Rock, North Dakota, riding with Sophia Wilansky, a friend from the Mycology Convergence. Erika worked in the kitchen tents and returned to her bike tour after drawing a dark Tarot card regarding the protest. Two weeks later, Sophia’s arm was blown apart in confrontation with police, garnering national attention. She is one of many inspiring women Erika met on the road.

These women were a touchstone for Erika: meeting new people would inspire her to keep pursuing her work, while bonding with friends and family sustained her. Between these moments of contemplation and connection, she continued to travel to New Orleans, visiting eighteen food co-ops along the way. She witnessed socioeconomic decay and its relation to food. “My mantra on this trip is that food is medicine,” she says. “I see it everywhere.” The answer, for her, lies in finding ways to get good food to the people who need it most. Collective ownership can provide that solution. By cutting out the middlemen of employees by using owner-volunteers and incentivizing the re-use of wasted food, healthy food becomes more accessible.