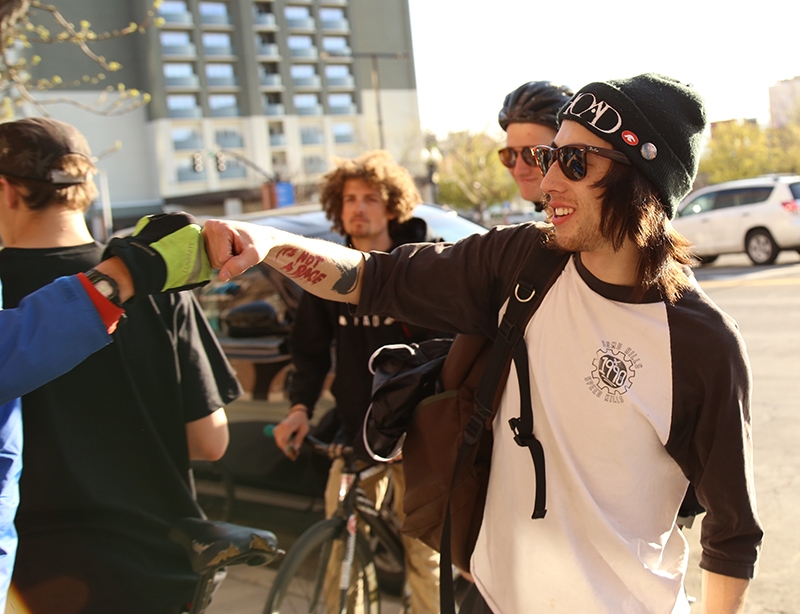 The first thing I saw as I approached Coffee Garden Downtown was a cluster of messy-haired miscreants gathered around a literal pile of bikes. From my experience over the past four years, I know that that’s a sign that you’re about to have a good time. Jake Matsukawa of 3Bs Krew has been thrashing around the city for seven years, and his reckless and punked-out style goes to show that the more times your crank makes a revolution and the more times your middle finger goes in the air, the better you know your city. I sat down with Matsukawa, track and fixie rogue and one of the original organizers of the 3Bs Krew, to see how the mastermind has launched their races and footage collection.

3Bs Krew, which started out as a partnership between Matsukawa and friends, is a group of cyclists who compete and film together, but even more so is, an amalgamation of friends who ride fixie freestyle and track in the city. A compact group of kindred spirits has spawned a giant family in Salt Lake that is overlapping and collaborative. Unlike other crews, 3Bs pulls in riders from outside their core group, or from other groups like FOAD, to film with them. 3Bs Krew’s acronym has proven fluid over time, changing as the size of the group became larger. “Originally, it was ‘Badass Brakeless Bastards,’ but we hang out with road bikers and mountain bikers,” Matsukawa says. “Then it was ‘Booze Buds Bikes,’ but we got straight-edger friends who are really chill and good homies. If you want an official one now, it’s just ‘Burritos Burritos Burritos,’ because everyone loves burritos.”

Every few weeks, the 3Bs Krew, namely Matsukawa, set out to organize another race or alleycat in the city. In February, Matsukawa first organized the Pain on Main, a 3-year-old adopted child that friend Micah George started in 2012. “The Pain on Main is a drag race with one-on-one sprints down a strip of Main Street just past 900 South and two people bracketed at a time,” says Matsukawa. “Originally, it was just the two fastest people in town racing each other to see who won for bragging rights, but now we want as many people to enter as possible.” After more than 40 people of wide-ranging skill sets and biking styles showed up for the 2015 Pain, we can look forward to more spring drag races in the future.

Alleycats have transformed over time to spandex endurance races. Matsukawa has a passion for keeping the old-school spirit of alleycats alive, most recently with ABC, which features classic alleycat elements like shortcuts, fixed gears and reckless control. “[ABC], was a three-day weekend, and each day, there was a different race,” Matsukawa says. “Start at point A, race to point B, and back to point A.” After he accumulated a massive collection of local and international sponsors, Matsukawa gathered their relative patches and got ahold of Velo City Bags to tie the prize package together. “As always, Nate Larsen at Velo City Bags came through,” he says. “We had companies from all over the world give us patches, and we put the patches on the prize bag, which made it super custom.” The most noticeable thing about 3Bs races is their creativity, which will be translated into more races this year, such as a possible Free Slurpee Day ride on July 11.

Even more important than race organization are the Krew’s gritty films, detailing the fast-paced daily flurries of freestyle riders in the city. From a clutter of chaos, Matsukawa and the rest of the Krew seam together imaginative and experimental footage that could only be birthed through freedom from planning and expectations. “It’s very raw, documentarian style,” he says. “Once we have a fat sack of clips, we just make it work with the music or the theme that we’ve chosen. A lot of the time, it feels like we don’t know what the fuck we’re doing out there, but we get back to watch the footage and realize it actually worked out.”

While 3Bs is tied together by their love of fixed gears and track bikes, their relative styles and setups vary widely, as well as their approaches to filming from one shot to the next. In their films, punk or rap music is overlaid with a mix of fast riding and tricks, and is often offset by scenes of members hanging out or partying, giving you a sense of what they’re like as people. This versatility and unusual style shows in their psychedelic and crude editing.

For a Krew intent on coordinating races in the city and filming wildly swift rides, their mentality is neither condescending nor exclusive. “You shouldn’t have to race to ride a bike like us,” Matsukawa says. “Riding is about expressing yourself—the competitive stuff should come second. People around the world watch our videos and think that we’re doing criterium races, but we have the opposite mentality. We just go out and shred. We don’t think about it and we don’t plan it—we just document what we do.” In the end, as Matsukawa so simply and eloquently says, the most important thing is to “ride bikes, damn it!”

If you see Jake Matsukawa and the 3Bs Krew riding Downtown, chances are they’re up to no good—and catching it all on film.