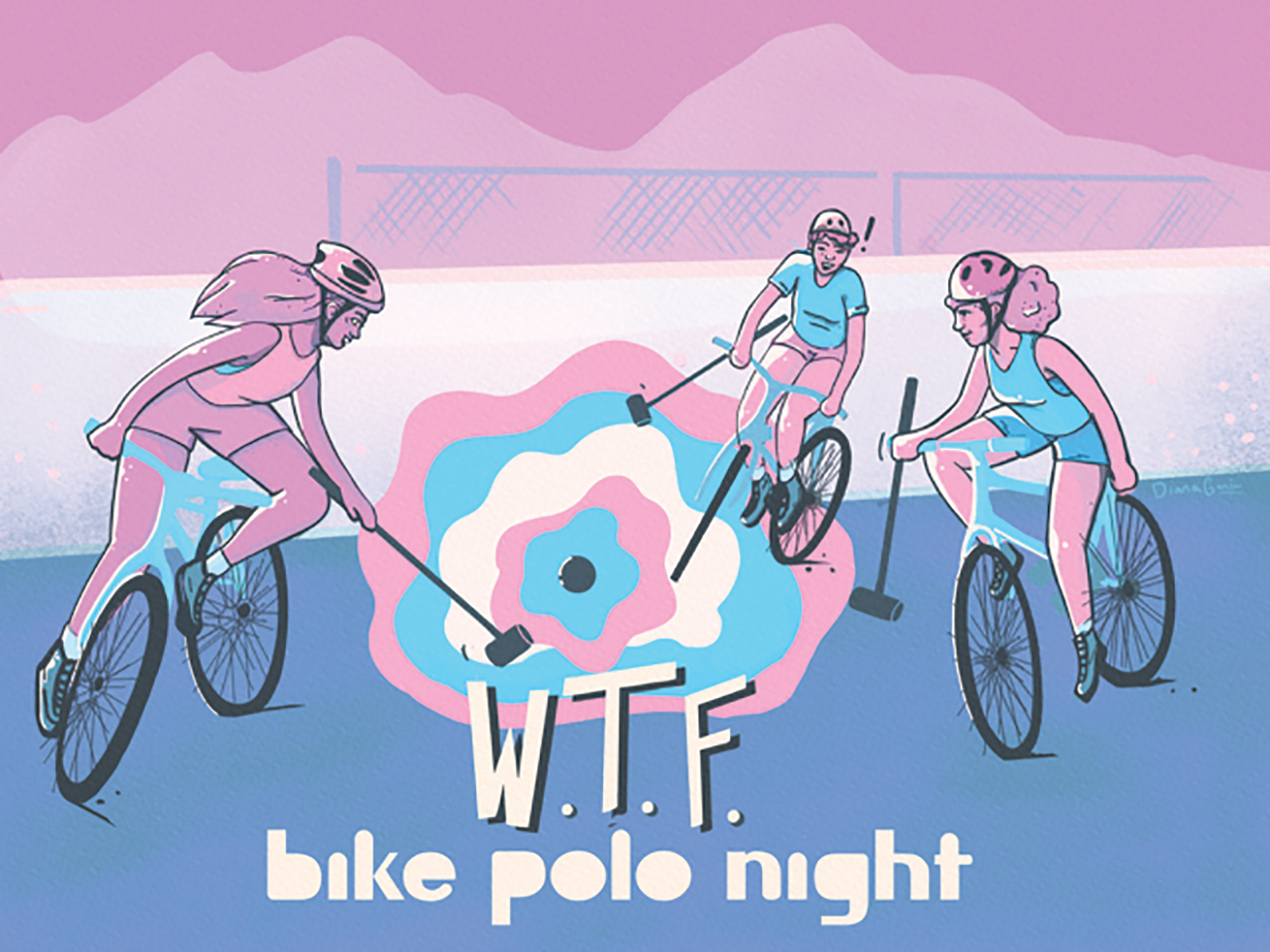 Donning mallets and protective gear, the Beehive Bike Polo Club is a group of about 30 members who pride themselves on inclusivity, diversity and the love of the game. Players of all backgrounds, experience and competition levels can play, learn to play and spectate at the Jordan Park multi-use sports courts with a like-minded community. Always encouraging of new players, Beehive Bike Polo also provides loaned equipment for newer and drop-in players to use, and resources for new players to hone in on the sport.

In addition to encouraging new playership, the Beehive Bike Polo Club designates playtime specifically for women, trans and femme folk, known as WTF Night. For member Tina Medley, the goal of WTF Nights resonates deeply with the core values of Beehive Bike Polo Club. “Beehive Bike Polo values inclusivity and diversity,” she says. “As a club, we want to show what mixed-gender sports can look like and create a space that is fun, safe and welcoming for people of all genders and backgrounds,” she says. once COVID-19 precautionary measures decrease, Beehive Bike Polo hosts about two WTF Nights a month. [Editorial Note: The print edition of this article references a different frequency for WTF Nights. The information presented here reflects this correction].

“I do feel that WTF Nights have encouraged more participation by creating a gentler introduction to the sport.”

WTF-designated nights are becoming more commonplace within bike polo communities around the world. Beehive Bike Polo Club originally caught on to this idea from a worldwide bike polo Facebook discussion group geared toward inclusion for women, trans, femme and nonbinary players in the sport, and maintaining a safe space for those players. “WTF Nights have been well-received worldwide, including [in] SLC,” says Medley. “There are times people don’t understand or feel excluded, but once it is explained to them why such a space is needed, they usually come around.” As an inclusive group, Beehive Bike Polo Club is consistently looking to increase their membership of anyone with the interest, especially those who identify as women, trans, femme and nonbinary.

Even though Beehive Bike Polo is a mixed-gender sport, there can be a tendency for male members to dominate the numbers in the group. For Medley, one of the ways that Beehive Bike Polo Club ensures that there is a safe space for WTF members is to emphasize and enforce the time during WTF Nights. “WTF Nights are for WTF folk only, playing or not,” Medley says. “We can’t control spectators, but we do not allow any male players to hang out during the WTF Nights time window. We do open the courts up to everyone later in the night.” In addition to this, Beehive Bike Polo Club hosted a WTFGNB (Women, Trans, Femme, Gender non-binary) Tournament last September where pronoun pins were available. In the future,  they plan to use these pronoun tags during WTF nights, as well. [Editorial Note: The print edition of this article incorrectly states that Beehive Bike Polo did not provide pronoun pins at the WTFGNB Tournament. The information presented here reflects this correction.]

“We want to create a space that is fun, safe and welcoming for people of all genders and backgrounds”

For WTF folk interested in checking out Beehive Bike Polo Club, Medley affirms that WTF Nights are an inviting, low-pressure way to get acquainted with the sport and the other members. “We try to create welcoming and encouraging vibes because bike polo can be quite intimidating,” she says. “I do feel that WTF Nights have encouraged more participation by creating a gentler introduction to the sport. Over the years, we have acquired around 6–10 WTF players through WTF Nights.”

Beehive Bike Polo provides bikes and protective gear during WTF and rookie nights for new and returning players, working closely with the SLC Bicycle Collective as a resource for fixing bikes and obtaining affordable equipment (SLCBC also sponsored Beehive Bike Polo Club for a ZAP grant in 2016, and hosts their own WTF Nights). Along with using the SLCBC as a resource for affordable polo bikes, Medley says, “We advise people to wear close-toed shoes and bring a helmet if they have one … Everyone is uncoordinated in the beginning! It’s definitely an awkward feeling to ride a bike with one hand and yield a mallet in the other, but it does get easier (and more fun)—we promise.”

While Medley and the rest of the Beehive Bike Polo Club look forward to being able to meet up again at Jordan Park (public-health safety measures permitting), Medley says the club wants to focus on networking with other people and organizations through events and demos once they are able. WTF Nights and Rookie Nights are essential programming for the Beehive Bike Polo Club and will be the first to come back once bans on meetings are lifted. There are also plans to paint murals on a storage container provided by the Bicycle Advisory Committee for Jordan Park, and the club plans on rescheduling their springtime Wasatch Open III tournament. [Editorial Note: The print edition of this article states that the tournament was rescheduled for this fall. Beehive Bike Polo have indefinitely postponed the tournament until a COVID-19 vaccine is available.] For more information, including times and dates for WTF Nights and other activities, follow Beehive Bike Polo Club on Facebook and Instagram. They can also be found at beehivebikepolo.wordpress.com.